A Night at the Gordon Globes

This past Friday night marked another memorable Gordon Globes event. Like Hollywood’s star-studded Golden Globes, Campus Events Council (CEC) hosts the annual Gordon Globes to recognize and award a slew of exceptional student films from seven different categories. The best films from each category qualify for a chance to win the People’s Choice Award for the Best Film.

In the A. J. Gordon Chapel foyer, photographers snap shots of everyone dressed in their red-carpet best. The scent of perfume and after-shave saturates the air. There are some who lean toward making fashion statements with suit jackets and ball gowns, while others keep it casually quirky with thrift store finds. Without a doubt, Gordon Globes has everyone looking sharp.

Exit 17 Live, Gordon’s late night TV program, was on the red carpet before the event during the pre-party. Co-hosts Drew Morgan ’16 and Andrew Farley ’15 polled for opinions and anticipations as a cameraman followed them around. When it came time to settle down students tightly packed into pews with friends. Soon the lights went down and the show started.

The evening’s hosts, Shakia Artson ’15 (pictured above, right) and Kika Ghobrial ’16, ushered in the night with glitz and style. As they moved the night along, the awards rolled in. While all nominated films were excellent, there were six clear winners. 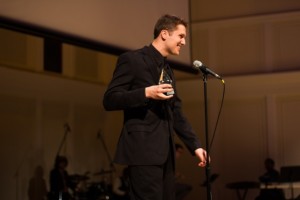 The best of the best was decided by a text-to-vote poll of the student body. Sam Solberg’s stop-motion Lego short, “King’s Table,” pulled ahead to earn the award for Best Film. After receiving his award and displaying the infamous star of his film, the Lego King himself, Sam expressed thanks to those who helped produce the film,  and to the voters.

Shakia and Kika closed the show by inviting students to join them onstage for a Soul Train dance-off exit. All in all, it was another fabulous night at the Gordon Globes.