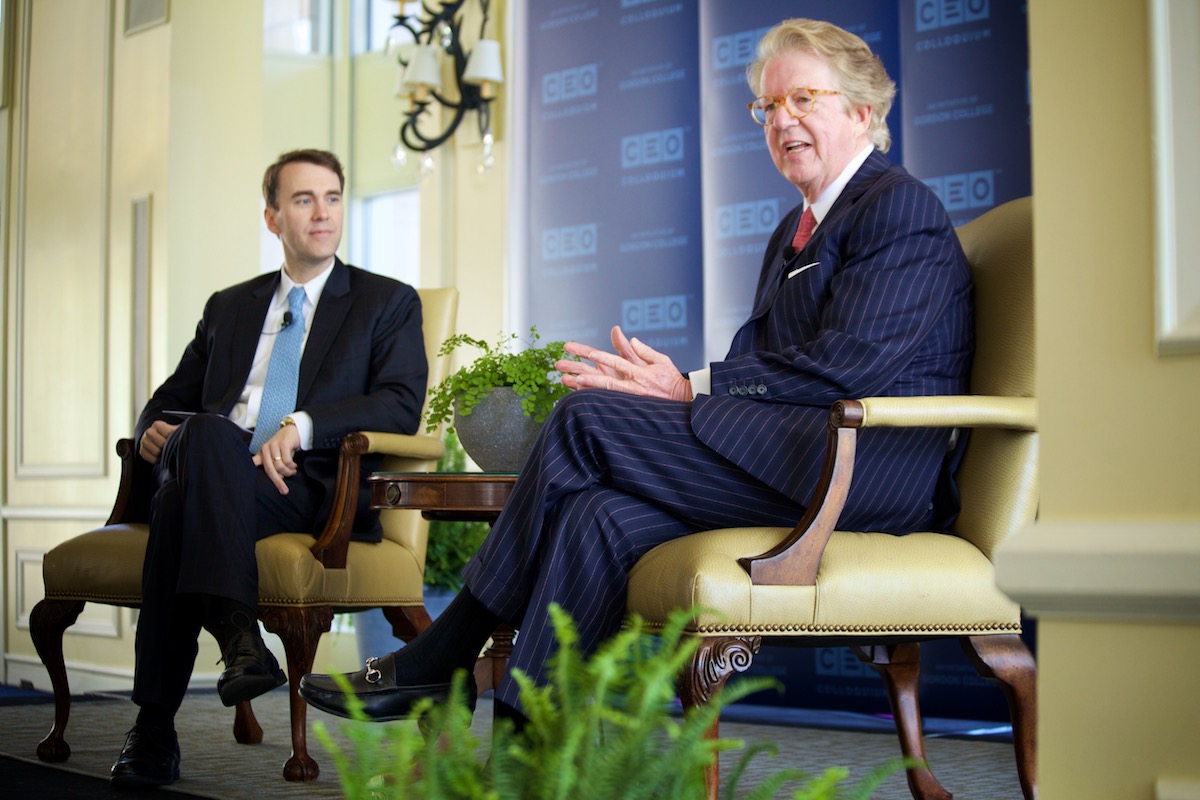 “When you think of Aflac I’m quite certain the first thing that comes to mind…is the Aflac duck,” joked Pam Hamlin, global president of Arnold Worldwide and host of last week’s CEO Colloquium, a Gordon College initiative.

Hamlin’s remarks prompted a chorus of the distinct “Aflack quack,” squeezed from tiny stuffed ducks that greeted the 115 distinguished guests at their luncheon tables.

“Beyond the duck,” she said as she introduced keynote speaker Dan Amos, chairman and CEO of Aflac Incorporated, “is a successful company and CEO.”

Amos, in a sharp navy suit and signature round glasses, took the stage with Gordon College President Michael Lindsay. The pair sat at the front of the windowed room at the Boston Harbor Hotel, the sunny waterfront panorama peeking over their shoulders as they engaged in a “Conversation with the President” Q&A.

In a Southern drawl, Amos reflected on the importance of women and diversity in the workplace, the challenges of doing business across borders, the value of biblical principles, the blessings and curses of working in a technology-saturated world—and, of course, the infamous Aflac Duck.

Amos began working for the insurance company more than 40 years ago, when it was a small, family-run start-up in Georgia. “The hardest part,” he said, “was when I became president.” It was arguably also the best part. Under Amos’ watch Aflac has grown into an award-winning Fortune 500 company, repeatedly named one of America’s Most Admired Companies and one of the 100 Best Companies to Work For by Fortune magazine.

An accomplished and decorated CEO, Amos said he follows three simple principles: “Don’t risk a lot for a little. Don’t risk more than you can afford to lose. And consider the odds.”

Among his bigger risks was introducing the Aflac Duck, an admittedly strange concept, on millennial day (January 1, 2000). The goal was to differentiate from the many other companies with “American” and “Family” in their names (Aflac is the acronym for American Family Life Assurance Company). The risk paid off. “Before the week was out, we had more internet hits than the entire year before.” The duck put Aflac on the map, doubled business and sent household name recognition skyrocketing.

Aflac now insures more than 50 million people worldwide, including one out of four households in Japan. Despite the roughly 7,000 miles between Georgia and Japan, Amos said, business is nearly seamless. When the two headquarters teleconference, they meet in curved rooms that mirror each other, giving the effect of a complete room. Amos joked that he once told someone to talk with him after the meeting, only to realize that individual was on the other side of the screen.

In closing, Amos offered a few nuggets of advice to college students and leaders-in-the-making, including “Treat people the way they want to be treated,” and “Never bend on what is morally and ethically right.”