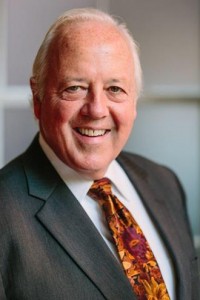 Gordon concluded the brisk month of March with a rather warm and inviting guest, former head of the Federal Aviation Administration’s (FAA) Air Traffic Organization (ATO), David Grizzle. President D. Michael Lindsay and Grizzle sat in armchairs atop a small stage, creating a welcoming environment during the most recent “Conversation with the President” event. Grizzle spoke about a variety of topics, including his humble upbringing, his desire to be President of the United States and how he came to know Jesus.

At the helm of ATO from 2011 to 2014, Grizzle oversaw all U.S. commercial airspace. He had previously served as the FAA’s chief counsel upon retiring from his post as senior vice president for customer service at Continental Airlines, where he had worked for more than two decades—with the exception of a 14-month leave of absence in 2004. In what might’ve been the most influential moment of his career, Grizzle was asked at that time by the U.S. State Department at the Pentagon to go to Afghanistan.

“They said, ‘Do you want to go to Kabul?’ I thought they said, ‘Cabo’,” Grizzle shared to a flurry of laughter throughout the Ken Olsen Science Center Chairman’s Room. He recounted the story of his decision to temporarily leave his post at Continental Airlines and go where he felt God was leading him: Afghanistan. His task was to improve the country’s infrastructure—including roads, power, aviation and telecommunication—by “coaching” the minister of each department.

The minister of power in Afghanistan, at the time, was a former warlord.

“I would come over and meet with him weekly. One time, I showed up a little bit early and his assistant, who always did his translations, was there with me. He says, ‘Minister Khan would like you to wait. He needs to go pray.’ I said, ‘That’s great. Tell Minister Khan I need to go pray, too. So I’ll be praying while he is.’ Minister Khan understood exactly what I said and had the biggest smile you’ve ever seen,” Grizzle recounted. Their firm faith dedication—Grizzle as a Christian, Khan as a Muslim—drew them closer as they worked together on the task at hand.

Throughout decades in prominent leadership positions, Grizzle has not separated his everyday life from his walk in faith. In fact, he says, one informs the other. “I will come in on a Monday morning and I will say something like, ‘You should’ve heard this sermon that they preached yesterday. This was amazing.’ Or, ‘You should’ve heard this sermon—one of the worst sermons I’ve ever heard in my life,” he explained. Grizzle makes sure to talk about the sacred parts of his life in the same way as the regular parts of his life. His lifestyle, he says, would be confusing if his colleagues did not know he was a Christian—citing, for example, that despite being vice president at Continental, he chose to live in a modest townhouse.

Grizzle grew up in a poor neighborhood in Atlanta. He was the first in his family to attend college. When he enrolled at Harvard at the age of 16, he remembers thinking he must be the “smartest person in the world.” A man of great ambition, his life goal, at least until his late 30s, was to become President of the United States. Although he may not be President, he is happily married to his college sweetheart, Anne, and is working toward privatizing the FAA, all the while serving as CEO of a consulting firm, Dazzle Partners.

Learn more about other events at Gordon >>