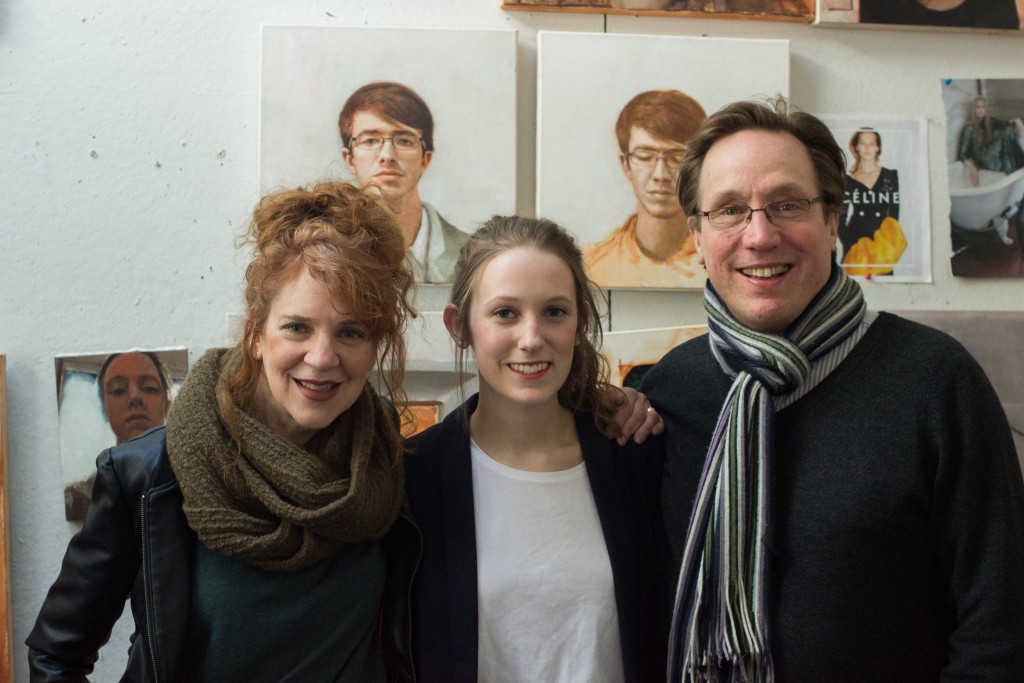 Art major Rebecca Orcutt ’15, from North Bend, Washington, is among 55 artists whose work was selected from a field of more than 2,700 this spring in the most prestigious portrait painting competition in the world. The graduating senior’s oil painting What Now will hang in the National Portrait Gallery in London from June 18 through September 20, 2015, in the museum’s Portrait Competition exhibit—among other pieces submitted to the competition by professional, international artists. The exhibition will then go on tour to the Scottish National Portrait Gallery, Edinburgh (October 2015–February 2016) and the Ulster Museum, Belfast (March–June 2016).

The competition aims to encourage young artists to focus upon and develop portraiture in their work. It is open to anyone aged 18 and older. London’s Daily Mail describes it as “the portraiture Oscars.”

“As a 22-year-old, Becky will be among the youngest and least-well-known artists in the show,” says one of Becky’s Gordon College painting teachers, Jean Sbarra Jones, who has been Becky’s mentor for much of her time at the College. In the summer of 2013, they visited the National Portrait Gallery together (while participating in Gordon’s annual British Theatre trip). Jones had visited the National Portrait Gallery more than a few times, and was familiar with the nature and scope of the Portrait Competition. She also knew the arc of Becky’s work. “Becky has remarkable facility and a very unique point of view,” Jones says. “She paints with an almost obsessive focus, creating magical transformations. While attending the portrait exhibit we both noticed that many of the paintings were highly realistic and unique. Having worked with her on her a series of paintings exploring the relationship between people and technology, I was very familiar with her interest in combining illogical or absurd relationships between the figure and ordinary objects. Her skill and subject matter seemed a winning combination.” She encouraged Becky to apply.

And the rest, as they say, is history.

During an independent study this past fall with Professor Bruce Herman, Becky completed What Now. “I thought of the image in the summer, and it was stuck in my head for a while before I decided to paint it,” she says. “I thought about theatre as I worked, exploring the conflicting realities of comedy and tragedy in real life.”

Becky came to Gordon already an award-winning talent. By the end of her first year she was invited to have a solo art exhibit at University of Alaska, Anchorage, entitled Circuit, which later was featured at the Barrington Gallery on the Gordon campus. By the end of her sophomore year she was invited to study under Alyssa Monks of the New York Academy of Art, in a workshop in Monks’ New York studio—and then, in the summer of 2014, she returned to study under Vincent Desiderio in a New York Academy of Art workshop. (Both Monks and Desiderio are major New York artists.) This fall Becky will enter the Academy’s prestigious M.F.A. program in Figurative Art, having received the school’s top scholarship award.

A contemporary realist, Becky’s approach to painting is neither photo-realistic nor strictly academic. Her work has strong narrative implications that prompt curiosity. Her involvement in theater while at Gordon—particularly comedy and absurdist theater—has informed the narrative element in her visual work, as in What Now, a surprising image of a figure lying on the floor with a small top alongside, with his back to the viewer.

“I wanted to capture something of the frustration in this,” she says, “the absurdity in wondering if there is purpose to existence, or if it is all meaningless. Something about this evoked a tension in wanting things we think will make us happy, even while knowing these to not be enough. I think the painting could evoke some of what daily life often brings, a sense of humor, and also despair, and not quite knowing which to embrace. I did not consider this a portrait when I painted it. I actually didn’t consider entering it into the competition until my professor, Jean, encouraged me to.”

Becky’s paintings also have been exhibited at Harvard University and in her home state of Washington, where a self-portrait, Breath, is on permanent display in the Old Capital building. Images of these and some of her other pieces—portraits, figures, and still lifes in oil, in charcoal, and in colored pencil—can be viewed on her website.

“It is always difficult to predict an artist’s path,” says Jones, “especially one as young as Becky; however, her current work suggests continued fascination with the observed world as it relates to her own experience.”