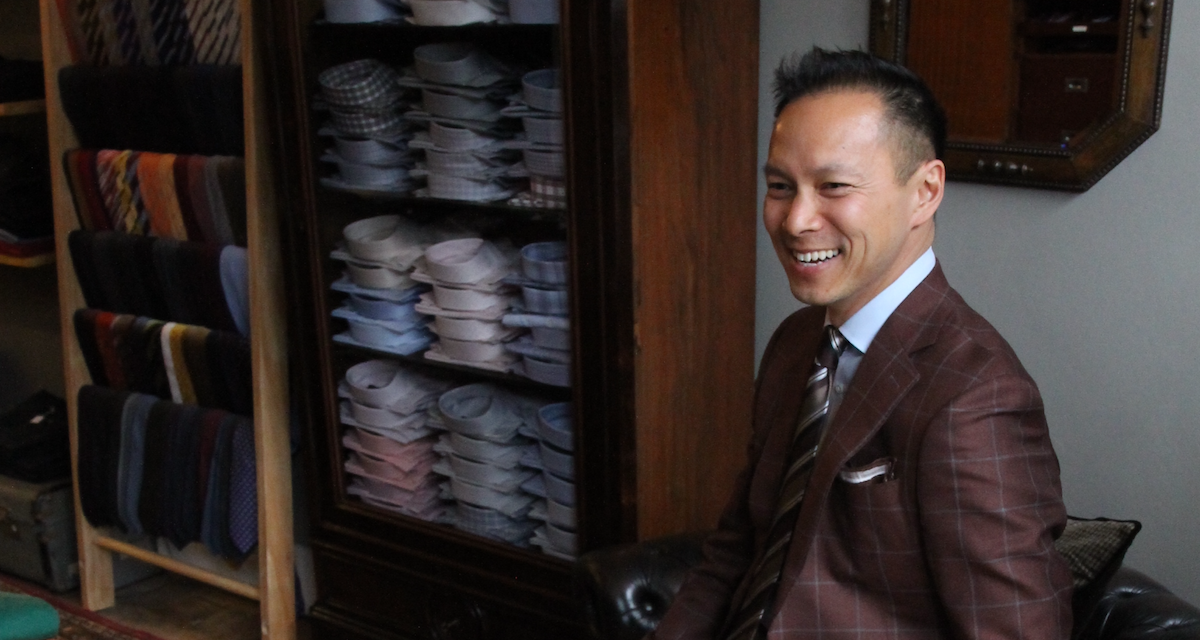 Times were tough during the dot-com collapse of the early 2000s. Newly married with a toddler and a baby on the way, Benjamin Eng ’93, a computer programmer at the time, got creative—by returning to his roots in classic clothing.

As a teen, Ben had developed an affinity for fine apparel while working for a men’s clothing store. Determined to upgrade from the hand-me-downs of his three older siblings, he frequented sale racks, searching out the best he could afford with the little money he had.

Once again on a budget as he waded the stock market crash, Ben was back to scouring stores for bargains—this time to sell on eBay. He quickly discovered a ripe market for high-end apparel at lower prices, and soon a new ecommerce venture was born. “A year later,” he says, “I quit my programming job to run eHaberdasher.com full-time,” growing it from its clearance-rack beginnings to a direct source of high-end goods from Italy.

Eight years into eHaberdasher, Ben says, “I was having difficulty sourcing men’s suits that were made with a certain quality but at a reasonable price point.” So, once again, he got creative— by leveraging the resources and connections he had established during his many business trips to Italy. “I decided to design my own line of tailored clothing,” the Benjamin line, using “small runs of beautiful Italian fabric” for suits, shirts and ties.

“Selling the Benjamin line alongside the most highly revered luxury artisanal Italian brands made it immediately trustworthy to my customers,” he said. “It’s fast becoming the biggest part of my business.”

Five years ago, Ben and his family moved to London. He launched a European arm of eHaberdasher, opened a brick-and-mortar store in Wimbledon and tried his hand at a new home line, Sartorial Home, utilizing fabric ends from high-end garments for throw pillows and other accessories.

His time in London has been a rollercoaster of understanding cultural differences and working to meet the needs of his new clientele while still providing support for his U.S.-based office and warehouse. “Amidst the ebbs and flows of running a business and keeping a balanced life,” he says, “my faith is integral to what I do and what sustains me.”

“Through the stresses, through the challenges, through the failures, it’s always helpful for me to take a step back and see life through the lens of having a faith that is focused more on eternity than just the present. My time at Gordon helped to galvanize my faith.”

And it helped provide practical experience through two co-ops—one at a retail bank and the other at the Harvard Coop, working as assistant manager of the men’s clothing department—that would serve him as he advanced to Ralph Lauren, Southwick, Nordstrom and eventually eHaberdasher.

“Fashion is fleeting,” he says. “Stay classic and buy quality, especially if you can get it at a good value. I still wear clothing that I’ve had for over 15 years!”