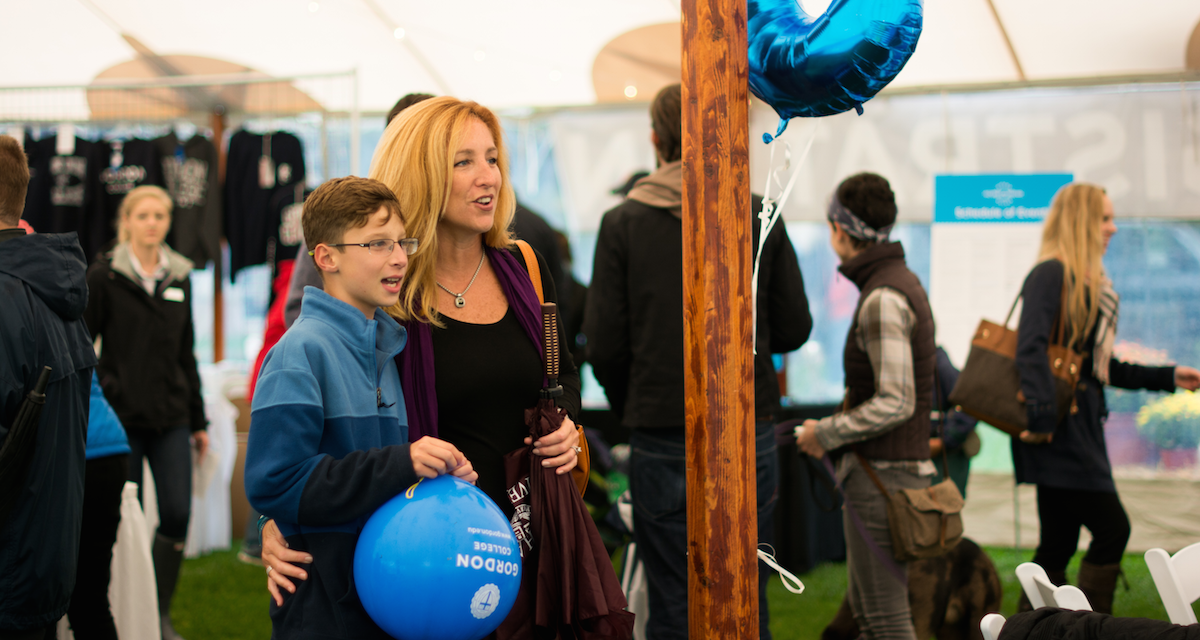 Despite the Rain, Homecoming Festivities Shined

Posted on October 6, 2016 by collegecomm

Fifty-five degree temperatures, cold rain and bitter wind didn’t stop the Fighting Scots from enjoying a warm and bright celebration during the annual Homecoming and Family Weekend on September 30 and October 1.

The festivities kicked off with a Theatre Department-led Homecoming Convocation on Friday morning, featuring Kristina Stevick ’98, who later that evening received the Alumni Entrepreneur of the Year Award at the Homecoming Awards Celebration. Several other alumni were recognized for their exemplary contributions to their fields and communities.

Gordon students had their share of the fun at a “Night Under the Stars,” a ‘20s themed dance hosted by the Campus Events Council. “I loved Night Under the Stars because CEC did such a great job with the decorations and the theme,” Sydney Cooney ’19 said. “I thought it captured the true heart of swing dancing, and it was a great way to socialize and make new friends while learning something new and fun.”

Saturday was jam-packed with beloved traditions, athletic events and exciting new activities like the Cornhole Tournament and Scot Talks by Drs. Ivy George and Tim Sherratt. The morning kicked off with the 10th annual Scot Trot 5k and Fun Run, where many participated despite the cold weather. In the Homecoming Welcome Tent on the quad, MC Dan Stevens ’07 kept the party going all afternoon with live music performances from Gordon alumni, and tons of Gordon merchandise and instrument giveaways. Lighthouse and the Whaler, a folk rock band, wrapped the day of with a special concert in Easton.

Gordon’s athletic teams had a busy weekend with both Men’s and Women’s Soccer in action against the University of New England. The men came out on top with a 5-0 win, and the women fell short in a tight game 2-0 despite the best efforts of goalkeeper Kali Denty ’20 who made 18 saves. “Although the University of New England was a tough team, we stayed positive, worked together as a team, and gave it our all. I am extremely blessed to be part of an amazing group of girls and coaches,” Denty said. “I am looking forward to continue to grow as a team not only on the field, but also off of the field.

Gordon’s new Club Ice Hockey team made its first appearance in over a decade with a 8-4 win against Suffolk University. Team fan Andy Myers ’20 said, “It was a great atmosphere, and a huge turnout. I am looking forward to cheering them on some more.”

At an event like Homecoming, it is fitting that the Gordon community celebrated rekindled relationships. Akash Ahuja ’19 said, “It’s amazing to hear stories from alumni and see them reconnect with their friends. This year there was a band in the Welcome Tent that played the whole time when they were at Gordon, and then didn’t talk after graduation. They got back together 24 years after they graduated just to play together for the alumni music. Stories like that make me happy and make me appreciate Homecoming so much.”

View photos from the Homecoming and Family Weekend >

← Becka May ’11: Understudy to an Olympian
Literary Collaborator for ‘Harry Potter: The Cursed Child’ Visits Gordon →