Posted on December 2, 2014 by collegecomm 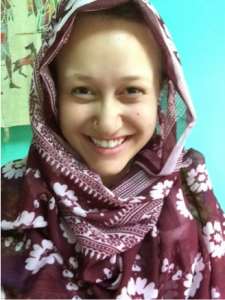 Languages mean different things to different people. A language can be a requirement for school or a gateway to a new world. Courtney Gingras ’15 would agree with the latter. Her passion for linguistics led her to N’Djamena, Chad, for the summer to help children in that country learn about their culture by first learning more about their native tongue.

Through the A. J. Gordon Summer Missions Fellowship, Gingras was able to travel to Northern Africa to work with missionaries in the field. The program was introduced at the beginning of the 2012 school year and, through extensive preparation, allows five students to explore missions work in the field in cross-cultural settings.

Her trip was divided into two parts. First, in the north and central region of Chad, Gingras aided a couple focused on creating a writing system for the Daza dialect. “It’s really cool,” she said, “teaching them the written part of their native language and allowing them to really have pride in their language.” The second half of Gingras’ trip was spent further north, teaching the Teda language with another pair of missionaries.

Gingras’ love for language sprouted from her studies in Global Christianity. Her interests in other cultures, religions and their people pushed her to engage more in the world around her. “I added [a] linguistics  [double major] this year as I realized that language is a necessary part of connection with others,” Gingras said.

Part of this understanding arose from Gingras’ previous internship in the summer of 2013. As a part of the Elijah Project honors program she interned in Nashville with World Relief, a nonprofit humanitarian organization. During her time down south she worked with Muslim refugees from countries like Sudan, Iraq and Somalia transitioning to a new life. “I have a heart for working with Muslims,” she said. “And this summer helped me better understand life in a Muslim world.”

The country of Chad has a unique division of faith. The north and central regions tend to be completely Muslim, while the south is Christian. Although the two groups live peacefully alongside each other, differences in culture create a major separation. However, Gingras believes that with the growing presence of education in the country, more doors towards reconciliation can be opened.

Gingras’ work this summer moved towards such a goal. Doing writing exercises with Daza children brought opportunities for future relationships between cultures. “Language is a necessary part of connection with others,” she said. “It’s how we view the world, engage with it, and engage with others and ourselves.”

When Gingras returned to the United States she left her heart with the people she met, until the day she can return. She hopes her trans-global experience has instilled in her a better understanding of peoples’ origins so she can help those transitioning in America to retain pride in their language and culture.

By Jesse Steele ’15, a communication arts major focusing on journalism with a minor in kinesiology. Rather than reading fiction he browses the academic catalog, figuring how to fit a triple minor into two semesters.