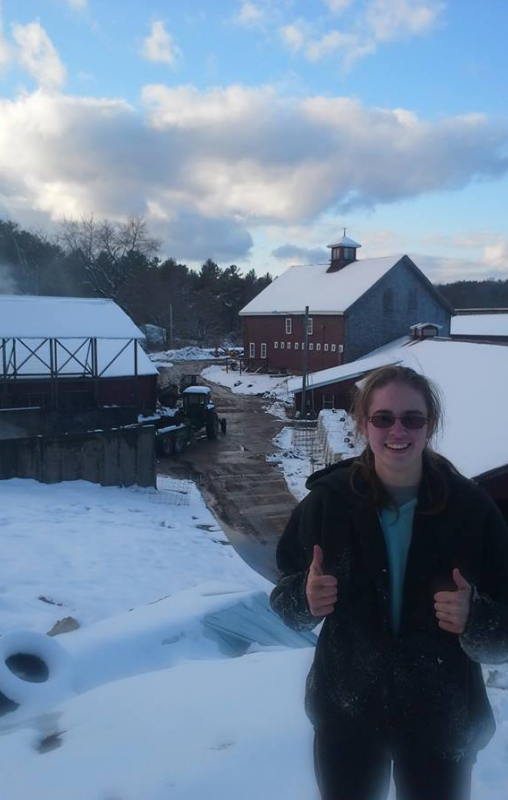 Not far from campus, in the small town of Rowley, MA, Kelly Herrick ’18 grew up on her family’s 300-year-old farm, which is soon to make an appearance on the big screen as the subject of a documentary called Forgotten Farms.

Herrick is a physics major at Gordon. Back home, she works on the farm.

In the 1980s, Herrick’s father built the original pipeline milking system that they used for years, milking cows in small groups at a time—just like any small dairy farmer. Despite the family’s decades-long hard work and love for the cows, the farm has suffered economically in recent years.

“100 years ago, everybody farmed,” Herrick said. “Farming is America—at least what it used to be” when local and micro-farming were a way of life. Now, with factory farming, giant supermarkets and other modernizations, Herrick said, “so many people are losing the connection. People don’t realize that the food doesn’t come from the grocery store.” She fears that the hard work her father has put in through the years seems to go unnoticed.

“We care about every single cow, and the health of every single cow is important,” she says. “Is the cow eating well? How’s their temperature? They get a lot of individual medical attention.” That kind of care, she says, is something you just don’t see at these huge factory farms.

Herrick’s mom is on the Dairy Promotion Board, and meets with all the dairy farmers throughout New England to ensure product quality and to bring awareness to local communities. This is where Herrick’s mother met Sarah Gardner, one of the producers of Forgotten Farms. As they talked, it became clear that Herrick’s own farm would be perfect for the film, which highlights the current hardships and silver linings for small-scale dairy farms.

For the Herricks, that silver lining came in the form of a federal grant that funded an upgrade from their pipeline system to a milking parlor as well as a new barn to house the machinery. This was a threefold blessing, Herrick says: it was not only cleaner and thus healthier for the cows, but it produced a higher quantity and quality of milk, and made previously rigorous process much it easier for their family.

The milking parlor is now running full swing. “Now our herd is healthier, and we’ve even expanded,” says Herrick. “We went from milking 70 in the pipeline to 130 with the milking parlor.” Now the Herricks can continue to produce higher quality and more humane products for the surrounding area—including the milk found at Gordon College.

Herrick also received a small farming scholarship from the Massachusetts Farm Bureau Federation to help cover college expenses. With this boost and her hard work, she will be graduating soon and plans to go back to the farm, where her herd and heart are. She plans on taking further classes in farm-related subjects such as dairy selection and animal physiology as well as shadowing her dad more in-depth so she can assist her siblings in running the farm in the future.

Forgotten Farms is playing all over New England and New York. It premieres tonight, March 2, at 7 p.m. at Beverly’s own Cabot Cinema, featuring a panel discussion with the Herrick family.