English and Adventure on the Open Road

Tucked away in the maze of hallways on the second floor of Frost Hall sits Dr. Andrea Frankwitz, associate professor of English at Gordon. When she’s not teaching American Romantic Literature and other English courses, you can find Dr. Frankwitz feeding her insatiable sense of adventure on road trips all around the country.

She has explored Yellowstone National Park, the Tetons, Rocky Mountain National Park, Mt. Rushmore, and the Black Hills—but that’s just the U.S. list. “My mom and sister and I are really close,” she says, “and we like to take trips to national parks. This last summer it was Glacier National Park. After that, we went up to Lake Louise in Alberta, Canada.” She has also traipsed through the Alps and other places in Europe.

Dr. Frankwitz has been road-tripping most of her life. She spent her first four years in and around Bedford, Massachusetts, before her family moved to Minnesota, where she spent the rest of her childhood. She attended Evangel College (now Evangel University) in Missouri for her bachelor’s degree, the University of Northern Iowa for her master’s in 19th-century British literature, and Oklahoma State University for her doctorate in early and 19th-century American literature. (In her spare time, she is also revising her doctoral manuscript on 19th– century American slave narratives.)

She left the Midwest to teach at Biola University in Southern California for eight years, serving as the department chair in her last year and earning tenure. But Dr. Frankwitz felt called to Gordon. In 2006, she says, “I saw the Gordon ad for this job and what they were looking for, it just seemed to be a match.”

She received the job offer two weeks after applying—an unusually fast turnaround. “That was kind of wild,” she admits, “but God moves like that, I find. This was one of those times in my life that God moved dramatically, where I kept giving things over to God. Sometimes I wanted to figure things out for myself, but I would keep giving it back to him, and I think it was because of that I just had tremendous peace.” 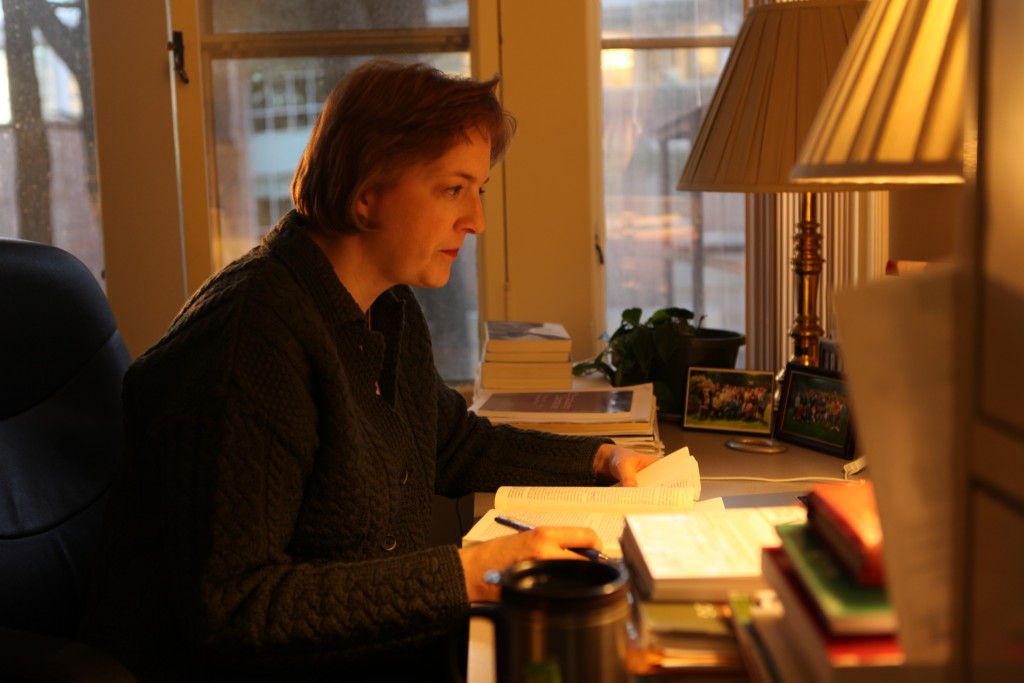 Coming up soon is the Literatures and Linguistics Undergraduate Colloquium—a long title for an annual conference first chaired by Dr. Frankwitz and her colleague Dr. Gregor Thuswaldner, professor of German and linguistics. “Students come from not only Gordon but around the country,” explains Dr. Frankwitz. “It is a way to help them experience some aspect of the professional discipline—in a small way to replicate a professional conference. I think it’s inspiring to hear what other students are working on, so I’m excited that this is continuing into its seventh year and has this kind of momentum.” The Literatures and Linguistics Undergraduate Colloquium will take place on April 2. The submission deadline is February 15. Learn more >>

Reflecting on her last road trip to Glacier National Park and why she loves traveling, Dr. Frankwitz says, “The idea of the open road. Well, just this idea that anything is possible and kind of in some ways exploring this idea of the new frontier. It’s just so peaceful.” You could say that sentiment is symbolic of her life. She’s taken chances and relocated across the country numerous times. In all of her travels, she trusted God and had peace. For her, exploring is really the exciting thing, “just like the frontier days,” she says with a grin.

← Bryce Bachelder ’10: 16,000 Stories Shared in Worship
Hunkering Down and Venturing Out on Snow Days →
Loading Comments...