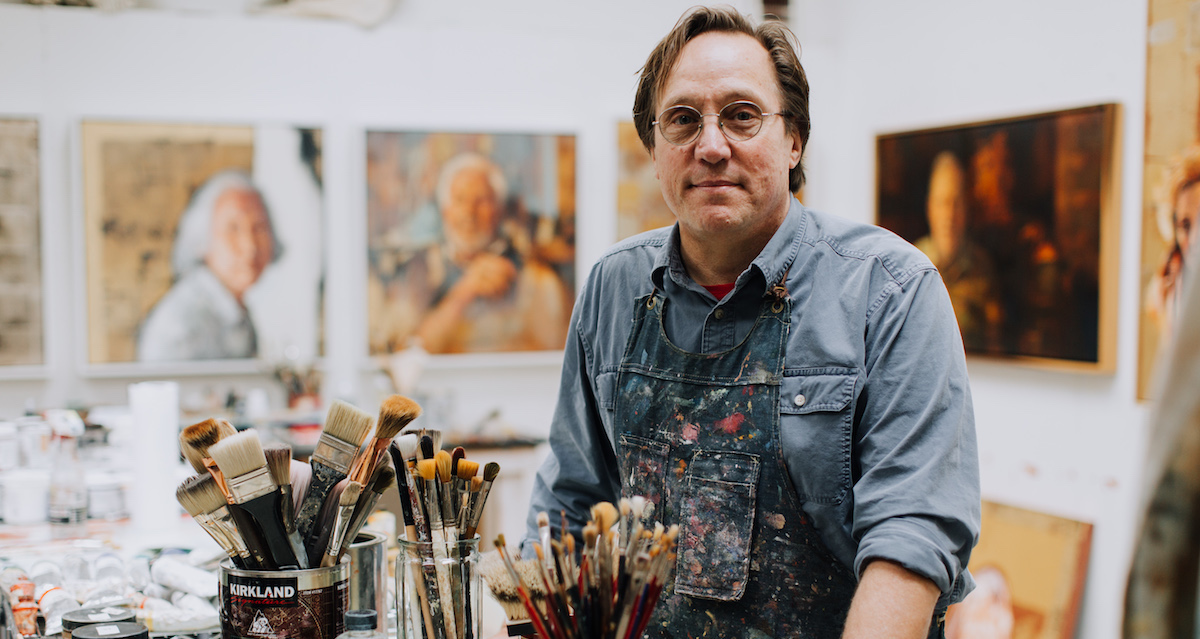 Herman Brings Loved Ones to Life Through Art

For Bruce Herman, tradition lives and breathes. Through art, Gordon’s Lothlórien Distinguished Chair in the Fine Arts hosts a loving communion between the artist and the audience. Embodying the rich tradition of collaboration, Herman’s most recent artistic endeavor, Ordinary Saints, is an intersection between painting, poetry and music.

Alongside poet Malcolm Guite of Cambridge University and composer J. A. C. (Jac) Redford of Los Angeles, Herman is creating a series of portraits depicting his loved ones and his two colleagues. The candid style and personal nature of these paintings explore the liminal space between the artistic traditions of the icon and the portrait in what Herman describes as “a conversation.”

“We’re kind of entering into no-man’s land, between the sacred traditions on the one hand and the traditions of portraiture, and of art-song and poetry,” he says.

Inspired by Herman’s paintings, Guite has written over a dozen poems, and inspired by both the paintings and poems, Redford is composing music for a ten-piece orchestra. The conversation continues as Herman completes his portraits, listening to Redford’s composition. Rather than a top-down influence, the three artists commune and inspire each other atmospherically. “I’m finding,” Herman says, “that my choices of color, or textural things, or compositional things probably are affected by Jac’s music.”

Though creating paintings, Herman’s inspiration of iconography demands delving into the metaphysical. In the Orthodox Church, venerated icons of saints serve a liturgical purpose. Beyond channeling this tradition’s style of gold and silver leaf, Herman employs the meticulous care that icon writers pour into their creation, and lifts a veil between the subject—ordinary saints—and the viewer. 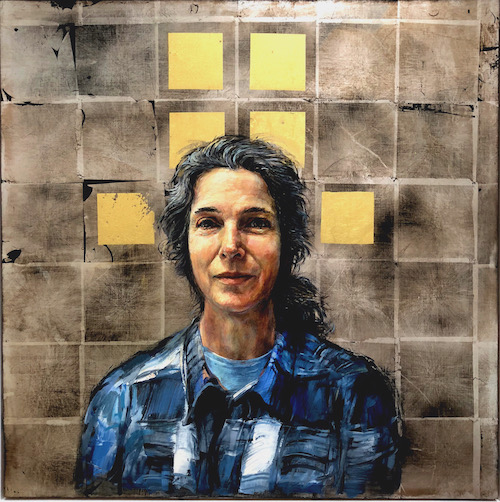 When a church in Charlottesville, Virginia, displayed a small collection of the series for a month, Herman says a viewer who saw the paintings nearly every day detected a spiritual nature in the paintings. Though he did not personally know the subjects, he felt as though he did—and as though the paintings knew him, too.

“I’ve figured it out,” he told Herman. “It’s pretty simple, actually. Those people love you, and that comes through the painting. So I’m being loved by them.”

It was a moment of great significance to Herman’s philosophy of Ordinary Saints, and the deeply personal task especially came to fruition when he painted his parents: “What if I explored this space between the portrait and the icon,” Herman asked himself, “and made these more than just portraits, but a chance for me to pray and to stay in conversation with my dad and my mom, who have passed away now, but also to stay in conversation with people who are far removed from me?”

“This may sound a little mystical,” Herman says, “but I really believe this—genuine works of art have life of their own.”

Among those Herman brings to life in Ordinary Saints is Walter Hansen, a benefactor of Herman’s endowed chair. Since meeting Walter and his wife, Darlene, when they funded his position in 2006, Herman has gained more than financial support. Inspired by Walter’s ideas and friendship, the two became collaborators; Walter initiated Herman’s last major project, QU4RTETS, and has become integral to Herman’s work.

“In order for art to be done, especially a big event like this one which is going to cost a lot of money, without that patronage it couldn’t happen,” Herman says. “But the fact that it’s connected to this deep friendship and this deep understanding between us is hugely influential.”

Thanks to the opportunities allowed through the Hansens’ support, Ordinary Saints will invite audiences to partake in the very same nature of communion. The exhibition will premiere  October 25 through 28 at Laity Lodge in Texas. Just as the artists play host to artistic creation, patrons will experience a three-day retreat that includes an exhibition, readings of Guite’s poetry, and live performance of Redford’s music. Over the course of the weekend retreat, audiences will spend time with the artists and performers, sharing meals and discussions.

“Allowing people in, like inviting my colleagues into this collaboration, and allowing them to change me,” Herman muses. “Our hope is that we will do the same for others, that we’ll spread light.”