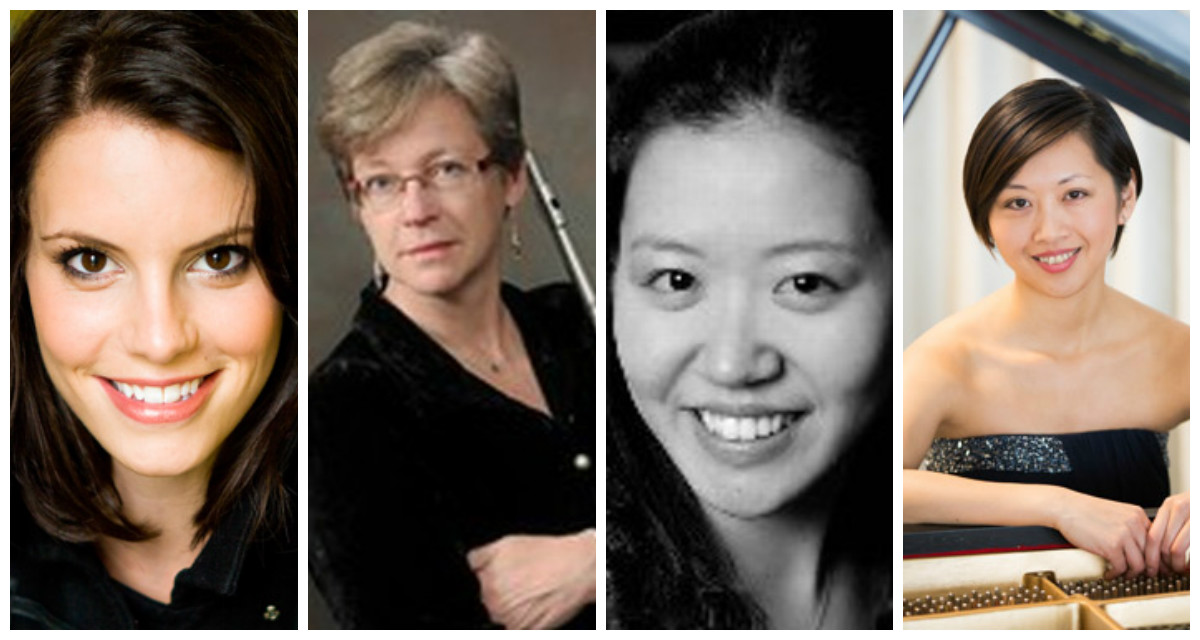 Music Faculty Take the Spotlight for a Night

Posted on November 9, 2016 by collegecomm

For Gordon faculty, “practice what you preach” goes beyond a moral obligation to altruism. It often involves getting their hands dirty and feet wet in their unique fields in order to create their own artistic masterpieces.

For the Gordon Music Department, that takes the form of delighting the campus with their Faculty Artist Series, the first of which was held late last month. With a packed house in Phillips Recital Hall, Courtney Huffman, Dr. Eileen Yarrison, Dr. Eunhae Grace Lee and Christiana Chao (pictured above, L to R) rotated duos, performing a total of 20 songs during the 90-minute concert.

The night started with Huffman, a soprano singer, voice instructor and teacher of vocal pedagogy, literature and diction at Gordon, and Yarrison, orchestral flutist, conductor and teacher at Gordon, performing six songs from Lori Laitman’s “I Never Saw Another Butterfly.” The cycle of songs, inspired by a series of poems written by children who perished in the Holocaust, stirred the hall with resonance and emotion, and the entire audience stayed hushed until it was over before erupting with enthusiastic applause.

Lee, a two-year representative of the Grammy Foundation and teacher of applied piano and music in worship at Gordon, along with Chao, a staff pianist and vocal coach at Gordon as well as at a number of other schools, sat at the pair pianos to perform music from the popular musical, An American in Paris. Their duo was akin to a dialogue, as each pianist would play in response to and alongside one another, creating a back-and-forth musicality that echoed across the walls of the hall like a harmonious dance.

After a brief intermission, Lee returned to her piano and was this time joined by Yarrison, who once again took up her flute. The two of them performed alongside each other in a musical cycle entitled “Horizons.”

The concluding performance yielded the strongest audience reaction, as Huffman once again took the floor and was joined by Chao on the piano. The duo played a series of songs that together made up a loose narrative called “A Young Woman in New York City,” highlighting Huffman’s beautiful vocals and Chao’s flawless musicality on the piano.

The next Faculty Artists Series concert will take place mid-February.

Learn about other Music Department events >