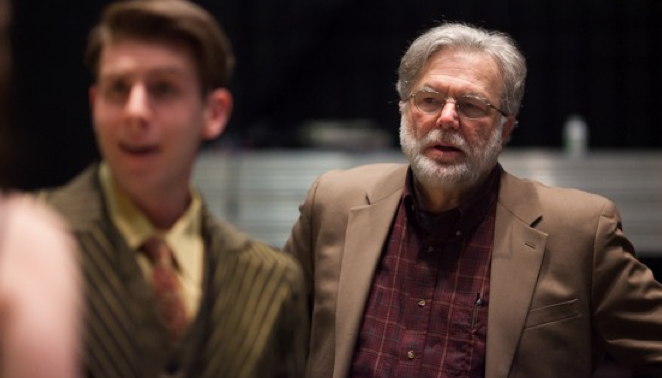 Twelfth Night and a 30-Year Tradition

The Theatre Department’s production of Shakespeare’s Twelfth Night begins this Friday, April 10, at 7:30 p.m. Directed by Norman M. Jones with an original score composed by Gordon music students, performances will bring to life Shakespeare’s lyrical script and the chosen setting of New Orleans. Jones’ adaptation of the play will highlight the central role of music in Shakespeare’s original text. A quartet of musicians from Gordon’s Department of Music will perform live, and the musical accompaniment and various songs help advance the story while creating an atmosphere of loss, restoration, and revelation of what is hidden. Performances continue on April 11, and April 14 to 18.

Professor Jones joined Gordon’s faculty in 1985 and is currently chair of the Theatre Department. Twelfth Night will be the 47th Gordon production Jones has directed and his eighth Shakespeare production at Gordon—quite possibly a directing record on campus. He has 30 years of experience helping to calm opening-night jitters and it always includes one tradition. “Before the opening-night performance of every play I have directed at Gordon, I tell the cast and crew a story from the film Chariots of Fire,” says Jones. “Eric Liddell’s sister is concerned that he is spending too much time running and it will take away time from his work for God. Eric replies, ‘God has made me for a purpose: China. He has also made me fast. And when I run, I feel God’s pleasure.’ I ask the cast to allow themselves to feel God’s pleasure as they perform; to know that God is blessed when we create this beautiful work together.”

Jeff Miller, also a professor of theatre arts, says he often sees Jones’ legacy as an industry mentor on the same level as Duke basketball coach Mike Krzyzewski. “Norm’s theatrical tenure at Gordon represents the kind of long-term faithfulness to students and excellence that’s the rare exception these days,” says Miller. “The hours of rehearsal and planning and collaborating required of that number of productions is staggering.”

Faculty and staff tickets are available at a discounted price of $8 at the Bookstore or at the ticket booth in Barrington before each performance (booth opens one hour before the show). The April 11 matinee performance has sold out, and tickets for opening night are selling quickly. Tickets also available online.

← An Aerial Viewpoint: David Grizzle
A State Full of Poetry →