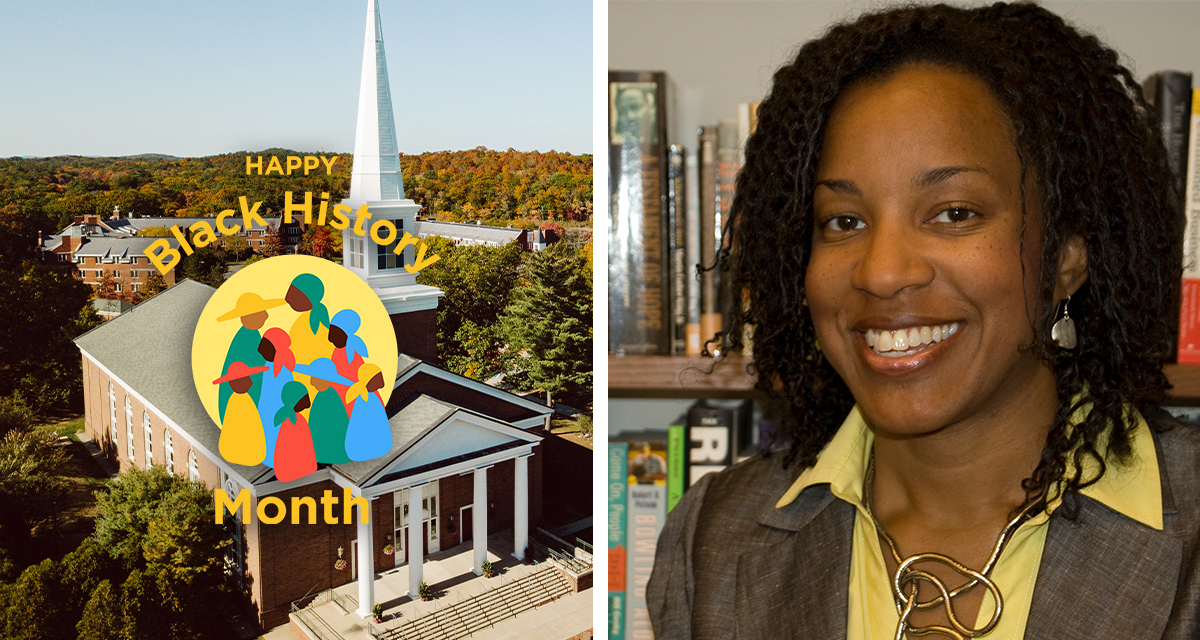 In April of 2020, several lawsuits were filed by churches who were fighting local governments for the right to offer sanctuary to immigrants and refugees during the pandemic. Around the same time, armed militias swarmed the Michigan Capitol to demand that the governor lift mask and stay-at-home orders. And in May, after the murder of George Floyd, many took to the streets to protest police brutality against Black individuals—and insist that Black lives be afforded the same value as White lives.

The lawsuits, rebellions and riots—each representing different demographics and causes—have one thing in common, said world-class anthropologist and President of the American Academy of Religion Dr. Marla Frederick during the Martin Luther King Jr. Convocation last Friday (which was postponed due to COVID-19 and a strategic late start to the spring semester). The common denominator in each was freedom. “It has been the one constant call across a nation deeply divided,” said Frederick in her lecture “The Price of Freedom: Lessons from the Crisis and the Cross.”

She wove these calls for freedom with others that have defined important moments and movements from African American history and applied them to Jesus’ teachings about spiritual and physical freedom.

The Truth Shall Make You Free

The call for freedom is one that Jesus understood well. Thousands of years ago, on the Mount of Olives, Jesus said to his followers, “you shall know the truth and the truth shall make you free” (John 8:32). Looking closely at this passage, Frederick pointed out, “Jesus chooses the word ‘free’ of all the longings of the human heart to be healthy and wealthy and wise.”

In this instance, he was talking about spiritual freedom, clarified Frederick. “To be set free from the power and penalty of sin.” However, Jesus’ message was not limited to spiritual freedom. In Luke 4:18, Jesus said that his mission on Earth was to “proclaim good news to the poor. . . proclaim freedom for the prisoners and recovery of sight for the blind, to set the oppressed free.” This passage, explained Frederick, is about a different kind of freedom—a physical freedom where the oppressed and imprisoned are set free and the blind can see.

Lies that Are Easy and Dangerous to Believe

According to Jesus, truth has a liberating effect on a person’s spiritual life and lived experience in the world. But lies and deliberate acts of withholding truth have the opposite effect; they imprison.

During the long period of slavery in America, Luke 4:18 was under lock and key as far as the slaveholders were concerned. Frederick said, “They feared the idea that the truth might make the enslaved believe they were equal to their slave owners and thus cause rebellion. Throughout the era of slavery, we see slave owners hiding the truth, selectively conveying to the enslaved the story of the gospel—only the scriptures that aligned with their social, political and economic interests. They knew the truth of Jesus might very well disrupt the lies of empire.”

“Lies and deception are dangerous for society at large”, says Frederick. “They undermine our democracy and they derail people’s faith.” In Frederick’s mind, there are several lies that work against truth and freedom in American society, but she chose to focus on two.

“Despite evangelical assertions about being Bible believers and making biblical decisions, believing biblical truths and upholding biblical standards, what has been resoundingly true for the entire world to see these past four years,” said Frederick, “is that not only are these declarations often false and misleading, but they laid bare the truth of what social scientists, theologians and Bible scholars have said for decades.”

Which is: our actions, standards and beliefs aren’t perfect embodiments of God’s truth. “How we see the world and, even more, how we read the Bible comes not from on-high, unblemished,” said Frederick, “but it is filtered through our own lenses and contextualized by our very social locations.”

Evidence from Our Current Political Climate and African American History

For example our race, even more than our faith, is a great predictor of how we vote in presidential elections. Frederick elaborated, “While 81 percent of White evangelicals voted for Trump and maintained their support for him throughout his presidency, nearly 94 percent of Black women (most of them Christian) voted against him in both elections? How do you reconcile these numbers?” This suggests that our voting habits are less a direct outcome of our religious beliefs or objective opinions, and more a result of our personal experience—our cultural and racial identities.

There are also many examples from history that show how Christians altered the meaning of Scripture to accommodate their own set of cultural norms or biases. In American history, verses from the Bible were routinely used to justify slavery and lynching, legalize and uphold Jim Crow laws, defend the mission of the KKK and White Citizens Councils, refuse admittance of Black people into churches and exploit Black workers, explained Frederick.

The Consequences for Black Christians

Twenty-five years ago, these were the reasons why many Black students at Spelman College challenged Frederick and her fellow Christian classmates when they tried to “discuss the merits of Christianity” with their non-Christian peers. With these examples, it was hard to dispel the notion that Christianity was “the White man’s religion, full of White supremacists and committed to the subjugation of Black people,” said Frederick, quoting the very words of her Spelman classmates.

At the time, Frederick said, “We separated Jesus from the deeds of those who operated in his name. We argued for Jesus—that Jesus is Christianity. . .” Frederick’s experience is part of a much larger story that spans centuries. “This is the story of Black Christians throughout history, trying to reconcile a faith in Jesus with the reality of a White Christianity that has too often committed itself to white supremacy,” she said.

Instead of assuming that our individual views are biblically-sound and objectively true, Frederick urged us to revisit the cross and Jesus’ incredible humility. To get to the truth and the freedom it offers, we first must undergo self-examination, then look critically at our surroundings, and finally examine our history. When we do those three things, Frederick said, “We realize that our particular story, our way of seeing the world is a partial truth. As one anthropologist describes it.”

The second lie Frederick deconstructed is one we’re familiar with, but often fail to recognize in ourselves. It’s sneaky and shapes much of our behavior subconsciously. It’s the belief that we’re superior to others in some way because we perceive ourselves to be smarter, better educated, more devout, more professional, saner, healthier, wealthier, more qualified, more experienced or just more “right”.  The danger of superiority, explained Frederick, is that it often makes others appear less human. This, after all, was the lie that “undergirded slavery. . . and justified the expulsion of Native Americans from their own land.” In 2020, this lie impacted so many families detained at the U.S.-Mexican border. The propaganda—of reducing migrant families to a motley crew of “Mexican rapists and gang members helped justify a brutal policy of family separation,” asserted Frederick.

To undo this lie, we must be aware of our impulses toward superiority and reject them, advises Frederick. Also, “we must learn to appreciate other people’s stories and the consequences of our actions upon them and the work that it takes them to share a faith with a tortured past.”

In closing, Frederick revisited the words of Jesus, saying “In the end, we have to decide if we truly want to be free. If we want to live in truth. And that I cannot mandate; it is your choice. And it is my choice. I can only hope that you trust that Jesus’s words are true. You shall know the truth and the truth will make you free.”

Don’t want to miss the next lecture or lecture series? See a list of upcoming events hosted by the Center for Faith and Inquiry.