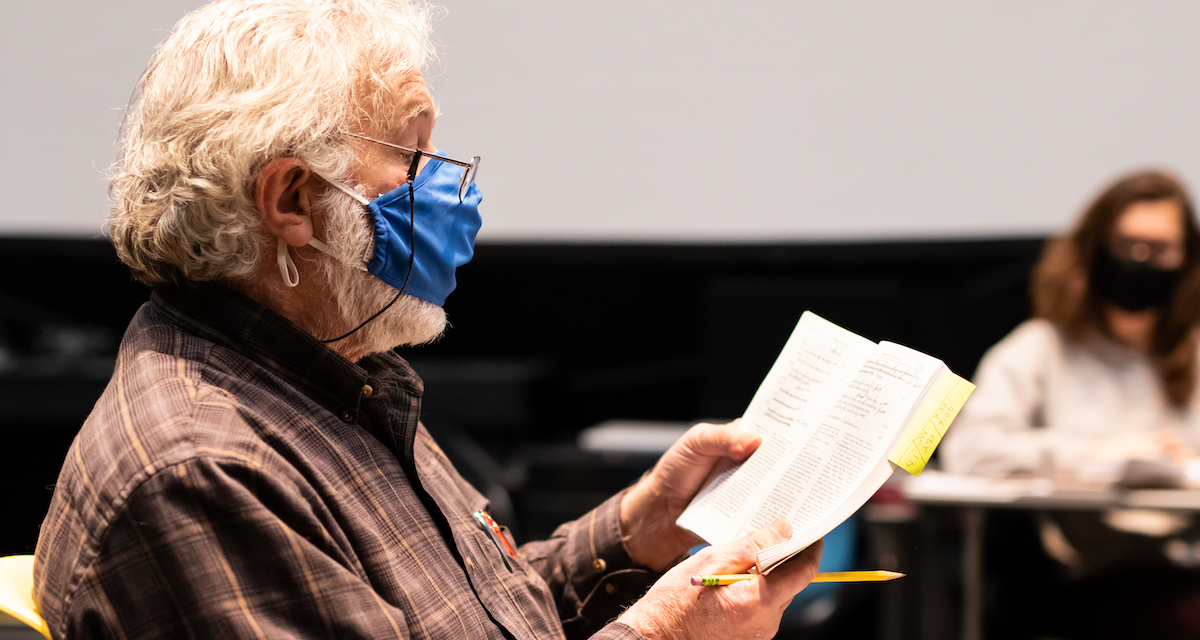 Creativity in Crisis: How Gordon’s Thespians Adapted to COVID Constraints

This is the second article in a series highlighting how Gordon’s fine arts departments have creatively adapted to the constraints of COVID-19 precautions.

This weekend when Gordon College Theatre wraps their opening night of Measure for Measure, there will be no audience in the Margaret Jensen Theatre to give a round of applause as the actors take their bows. Taking their cues from countless other theater companies—including some Broadway productions—they will be performing for a set of cameras and a livestream audience.

This semester, rather than “thinking outside the box,” directors, performers, set builders, and costume and lighting designers learned to think inside the box, challenging themselves to create an engaging show under new COVID-19 constraints. “We tend to think of boxes as being signs of limitation, captivity and creative oppression, but they don’t have to be,” says theatre arts major Sofia Jeanes ’21. “It makes art more of a puzzle when someone tells you, ‘You can’t do this the way you’re used to.’ You’re immediately pushed to come up with a new solution, to try something you wouldn’t have otherwise.”

As they say, the show must go on. Here’s how Gordon Theatre pulled it off, even under extraordinary restrictions.

In a typical semester, theater students would use facial expressions to help tell a story, audiences would sit shoulder to shoulder to watch live performances, and cast members would hold hands for their final bow. This year, those familiar rhythms have been replaced by totally new ways of doing things. Cast members and spectators must practice physical distancing. And masked actors can no longer rely on facial expressions to convey emotion.

So, actors learned to rely on and appreciate other mediums. They could express emotion, says theatre arts major Maeve Brooks ’21, “through your voice, physicality and body movement.”

Due to reduced classroom capacity, actors often had to find unconventional rehearsal spaces, running lines in corners of the dining hall or late at night in empty psychology labs. Moving beyond their comfort zone in this way had a surprising impact on their performances. “I found that pushing the limits with comfortability really benefited the performances that followed those rehearsals,” Jeanes says. “It almost seemed to electrify the actors with a new sense of heightened emotion and was really exciting to watch.”

Among the more significant limitations of pandemic theater is the inability to give in-person performances. For actors, this means no longer having the ability to interact with a live audience and experience their reactions firsthand. In an effort to maintain the live quality of theater, the department made the decision to livestream their shows. On Friday evening, they will have their first livestream performance of Shakespeare’s Measure for Measure, directed by Professor of Theatre Arts Norm Jones. Of the 52 plays he’s directed at Gordon, this will be his first to be livestreamed. He explains, “I’ve never directed a film. This is a different style of directing.”

Even though the change in medium has forced Jones and others to sacrifice some beloved aspects of a traditional theater experience, many essential aspects have translated well to their digital stage—perhaps none as poignantly as theater’s “liveness.”

“The essence of theater is its liveness,” says Professor of Theatre Arts Jeffrey Miller. “It gives people a sense of community, the creation of a story that we can think about together and experience at the same time.”

Livestreaming allows students to perform in real time for a digital audience, capturing each night’s unique performance. “Theater is meant to be finite. Theater is more reflective of our actual life of how we go through different phases. We have this beautiful thing, [and] even though it didn’t last forever, it was there for the time that we needed it,” says Jessica Richmond ’16, technical director and production manager.

In a time that requires people to stay physically apart, many have found that theater has the unique ability to create a sense of togetherness that transcends physical space. It allows people to share a moment, a story and an experience with one another from anywhere around the world.

Historically, art has been a source of comfort and a way to connect in times of crisis. “I think we’ve all been reminded of how important art is, how it brings people together and allows for a communal expression of emotions and emotional release,” Jeanes says. “I’ve found that my own work has really shifted to have an emphasis on connection and relationship, which I view as a result of the circumstances that we’re in. When the world feels isolating, what do we have left? Our relationships with one another.”

Eager to see some of these ingenious adaptations firsthand? Purchase tickets to see a livestream performance of Shakespeare’s Measure for Measure premiering this Friday at 7 p.m. Performances run from March 19–27 and feature many of the people quoted in this article.