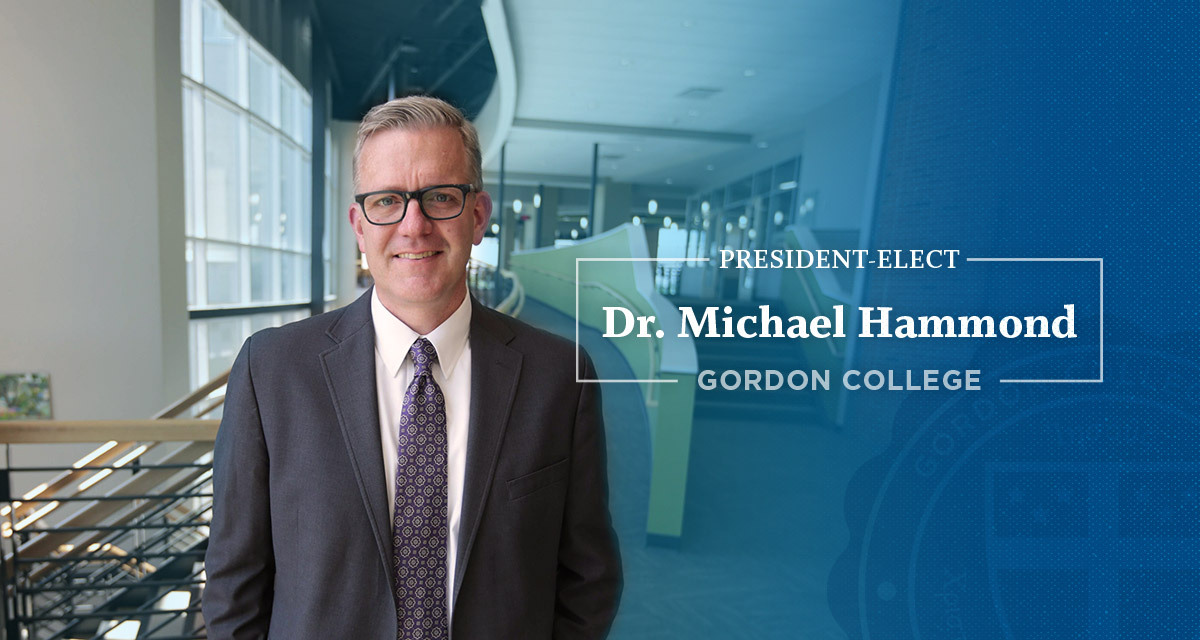 Following a seven-month national search, Gordon College announces Dr. Michael D. Hammond as its ninth president. Currently serving as the provost and executive vice president at Taylor University in Indiana, Dr. Hammond will begin his tenure at Gordon on July 1, 2021.

“We strongly believe Dr. Hammond embodies the qualities, attributes and aspirations voiced by the many members of the Gordon community who provided input for this search and care deeply about Gordon and its future,” said Carrie Tibbles, M.D. ’93, a member of the College’s Board of Trustees who chaired the search committee and is both a graduate and current parent. “Throughout this detailed assessment process, Mike Hammond exhibited a rare combination of academic credibility, an effective and collaborative leadership style, deep spiritual character and maturity, a heart for students, and a passion for Christian higher education.”

Dr. Hammond has a distinguished career in higher education over the last two decades that includes leadership roles at Southeastern University in Florida as well as at Taylor. He has a reputation among colleagues as being both an innovator and a consensus builder adept at leading with a shared vision. An Indiana native who trained as a historian, his career has also taken him to Washington, D.C., and Chicago. He earned his Ph.D. at the University of Arkansas, his M.A. at Wheaton College in Illinois (with a specific expertise in the role of religion in American life)  and his B.A. from Taylor University. In his scholarly work he has published and lectured extensively on American Christianity and the civil rights movement, particularly in how the intersection of race and religion in the 20th century played out in the United States. In many ways this gives him unique insights into similarly relevant issues today in our country and on college campuses, which are particularly important to this younger generation of college age students.

“We felt it was particularly important not only that Gordon’s next president represent the best of both worlds through extensive competency in managing the academic program at the heart of a Christian liberal arts education as well as proven operational leadership experience, but that he also be able to build upon Gordon’s strong foundation,” said Herman J. Smith Jr. ’70, chair of Gordon’s Board of Trustees. “Dr. Hammond stood out among a strong pool of candidates as both an innovator and a consensus builder who brings wisdom and a vision for our future. We are confident he is the right leader at the right time to successfully lead the College through the changes and challenges confronting institutions of higher education.”

Hammond will succeed Dr. D. Michael Lindsay, who announced last fall he would conclude his 10-year tenure at Gordon at the end of his current term on June 30. Last month Dr. Lindsay was named as the new president at Taylor University—an unexpected touch of irony given both schools conducted separate and confidential searches. It does add to existing similarities between the institutions, as both are close in size based on student enrollment and are nondenominational (have no specific church affiliation as Christian institutions). Both were also founding members of the Christian College Consortium and Gordon’s fifth president—nationally recognized theologian Harold John Ockenga—was a Taylor University graduate.

Dr. Hammond and his family were introduced to the Gordon’s campus community today.

“Educating the whole person with hearts and minds surrendered to Jesus Christ, pursuing knowledge with curiosity, skepticism and an insatiable desire to serve the world with that knowledge: that is the mission of the Christian liberal arts, and I’m so excited to join you at Gordon College, to realize this mission in an even greater way,” said Hammond. “I look forward to seeing Gordon grow as a place where vigorous academic research and teaching are integrated with vibrant Christianity—where servant leadership is practiced, modeled and cultivated in our campus community and echoed through our alumni who faithfully participate in the work of Jesus Christ in the world.”

The Presidential Search Committee included 11 members of Gordon’s Board of Trustees and representatives from the College’s faculty and staff. With assistance from executive search firm CarterBaldwin, they examined a pool of more than 70 applicants (including 10 current presidents at other institutions). Additionally, feedback and recommendations for candidates were submitted from Gordon faculty, staff and students in the formative stages of the search. Committee members also conducted 30 listening sessions over the last few months that included faculty and staff, current students, alumni, church and secondary school leaders. They also conducted two sessions with parents of current students.