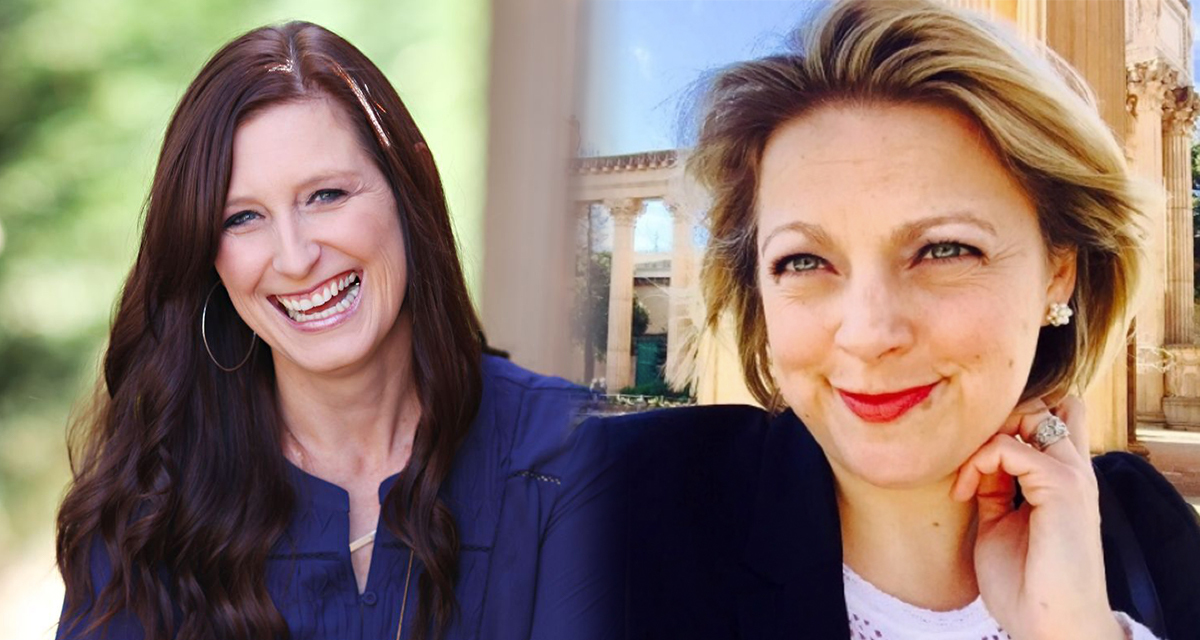 How Central Friendship Is to Preventing Burnout, Especially During a Crisis

In 1994, first-year Gordon students Sarah Petrin ’98 and Lisa-Jo Baker ’98 lived in adjacent rooms in Wood Hall. With a shared wall between their two beds, they developed a knocking system to communicate with one another. From that first year of college together, the two women formed a friendship that would last a lifetime—through international moves, job changes and sobering life experiences.

When Petrin graduated from Gordon, she went on to work in the humanitarian sector and international peace operations. Today her organization, Protect the People, has trained teams and agencies within the United States military, United Nations, International Committee of the Red Cross and NATO to ensure that civilians, refugees and displaced people are protected from exploitation and acts of violence. She wrote about her experiences as an international relief worker in her first book, Bring Rain: Helping Humanity in Crisis, which recently topped Amazon’s “Hot New Releases” list for nonprofit books.

Since her Gordon days, Baker went on to work with Habitat for Humanity and traveled across Africa and the Middle East. After a successful career as an attorney, she began writing, and is now the best-selling author of three books, including The Middle Matters: Why That (Extra)Ordinary Life Looks Really Good on You. She currently co-hosts the Out of the Ordinary Podcast and works as the community manager of (in)courage, an online community for Christian women.

Though their careers have taken them around the globe, their college knocking system has served as a continuing metaphor for their friendship. “We’ve both lived in a lot of different countries and done a lot of different work, but whenever we needed each other, we could just knock and be available for the other person,” Petrin explained last Thursday during a virtual conversation with Baker and moderator Dr. Ruth Melkonian-Hoover. The longtime friends were interviewed for a special event titled “From Gordon to the World: Taking an International Path,” which was hosted by the Career and Connection Institute and gave current students a window into vocations related to human rights and lawmaking.

Here is an overview of what they talked about:

Melkonian-Hoover: Why did you choose the title for this book?

Petrin: Initially I chose Bring Rain from a story [that appears] early in the book when my family served in missions. My mom was pregnant with me when they served in the village of Mobius in Kenya, East Africa. I was born in a year of drought. When I was brought back from the hospital, the village elders held prayers and a rain dance to welcome me back. They prayed that I would be a good omen and that I would bring rain to the village. Of course, I didn’t have that power as a small child, but from day one this idea that people had hope I would bring relief to many people stayed with me for a long time, and that’s where the title comes from.

Melkonian-Hoover: Sarah, this is your first book. Lisa-Jo, you’ve written three books and a Bible study. What are some of the glamorous and not so glamorous aspects of writing a book?

Baker: Sometimes we have this very romantic idea of what it means to write a book and, in my experience, it’s nothing like that. It can be really lonely because so much of what a writer does is by themselves in their own interior world, which is why community is so key. [After] answering the phone any time Sarah said, “This is so difficult! I don’t know what I’m doing,” [I’d] just tell her, “That’s completely normal.”

Melkonian-Hoover: Lisa-Jo, you’ve also done a lot of work with refugees. Can you help us understand your connection and how you got involved in that work?

I went to law school and always had a passion for international human rights. Having grown up under apartheid in South Africa, I think that’s how I ended up feeling, “How do I make a difference?” When I was a small child and we witnessed the terrible brutality of apartheid, I remember saying to my mom, “What do we do? We have to go and talk to the police about this”. She said to me, “The police will not do anything. If we want to make changes, we have to change the law.” The law has to change in order for there to be justice—and so it was my big motivator to go to law school.

Melkonian-Hoover: People are increasingly fearful of engaging in global crises given past mistakes in the international humanitarian sector and within missions. There is a fear of being perceived as or of acting like a White savior. How do you effectively and appropriately engage in your transformative work?

Petrin: The most transformative community work is done on the ground by the people themselves, with their own agency and their own resources. That kind of begs the question: What can outsiders do? The first thing to recognize is your own cultural identity. Some people might do damage to the communities they’re trying to serve by not treating them with mutual respect and care. We know there’s a long history of damage that’s been done, and undoing this damage takes a lot of hard work and soul searching, particularly for people that are of White racial backgrounds and of Western cultural backgrounds. We have to do this work of learning and unlearning behaviors that are harmful to others and journeying on in a spirit of partnership and friendship with one another.

Baker: When I came to Gordon, I remember I had this really strong South African accent that people would comment on all the time, but I would say, “I’m not the one with the accent; you are.” It was strange to realize I have an accent. We tend to assume ourselves as “the norm” and everybody else is different. As Sarah says, it’s the communities we walk into who really make you aware of those things you haven’t paid attention to before. The more we learn about our own stories, the better we are at appreciating and then coming alongside the stories of other communities.

Melkonian-Hoover: You both encourage us through your work to keep faith in humanity. How do you maintain hope in the face of such hopelessness?

Baker: We aren’t trying to get to a place where we are no longer affected by what we see or the work we do. Instead, in those moments, I think we really enter into the heart of God and his reaction to sin and injustice. I always encourage people doing this work—you’re not trying to get to a place in your career where you’re no longer impacted by that. Instead, you’re trying to put healthy systems around the work you’re doing so you can both feel the grief and the deep injustice, but you can find ways to cope through it, so you can continue to serve and be effective.

Petrin: God is capable of doing his own work in the world that is far beyond what we can do in our limited capacity as human beings, and faith is something that helps us see the bigger picture when we are faced with our own limitations. We are not the saviors. We can’t fix everything, we can’t change everything. We have to accept our own limitations. None of us are so strong that we can do everything ourselves, and this is not a go-it-alone business.