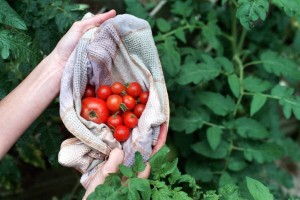 The only girl among her siblings, valedictorian of her agricultural high school and first in her family to attend a four-year college, Mollie Enright ’15 is a natural trailblazer.

During her junior year at Gordon, Mollie was chosen from a pool of 80 candidates to serve on a nine-person committee tasked with selecting the national officer team for Future Farmers of America (FFA). She previously served in an officer role as FFA State President for Massachusetts.

Less than a week after returning from Ireland, she headed to Michigan State University as part of its highly competitive Research Experience for Undergraduates (REU) Summer Internship Program, which is funded by the National Science Foundation. Mollie spent her summer researching how the acylsugars in the leaf hairs of vascular plants, like petunias, help those plants defend against insect attack.

Now this chemistry major is pioneering safer and sustainable methods for extracting lycopene, a powerful antioxidant that gives tomatoes their bright red color. “Gordon has given me that boldness to take charge of what I want to do,” Mollie says, and to answer the questions: “Why should I do it? Why does it matter? How can it impact others?”

Working with her research advisor, Assistant Professor Dr. Jennifer Noseworthy (biology), Mollie originally set out to discover whether there was a difference in lycopene levels among tomatoes grown in greenhouses versus fields. Does one have a higher level of antioxidants—which may play a role in the prevention and treatment of cancer—and is it therefore more beneficial? “Lycopene is directly related to human health and nutrition, so that’s why we care if there’s a difference,” she explains.

With that in mind Mollie decided to change course, shifting the project from analytical biochemistry into green chemistry with an agricultural spin. The goal of the Lycopene Project became creating a new, safe and sustainable method for lycopene extraction. “Then,” she says, “we can use that method to actually go back to the original question and see if we can answer it.”

As Mollie continues to develop her plant-based alternative for lycopene extraction, she notes that so far, “The research is telling us that there’s no significant difference between the two solvents, and that consistently the greener solvent, the one that we’re using in place of the old one, actually extracts better.”

Mollie’s interest in plants and chemistry began during her floriculture studies in high school, but she says, “I didn’t really think about how they would fit together until I started doing this research at Gordon.” Add in her FFA-inspired interest in the science behind large-scale agricultural production, and, Mollie says, “This is the place where I want to be—in between environmentalists and agriculturalists, dealing with public opinion and science.”

The Lycopene Project is a step toward that goal. With lycopene coming to the forefront of personal health and nutrition, its extraction and analysis will occur more frequently, Mollie predicts. “The people who are going to be working with it, they are now the target of my work—preventing them from having to handle hazardous chemicals.”