On Offense for the New England Patriots 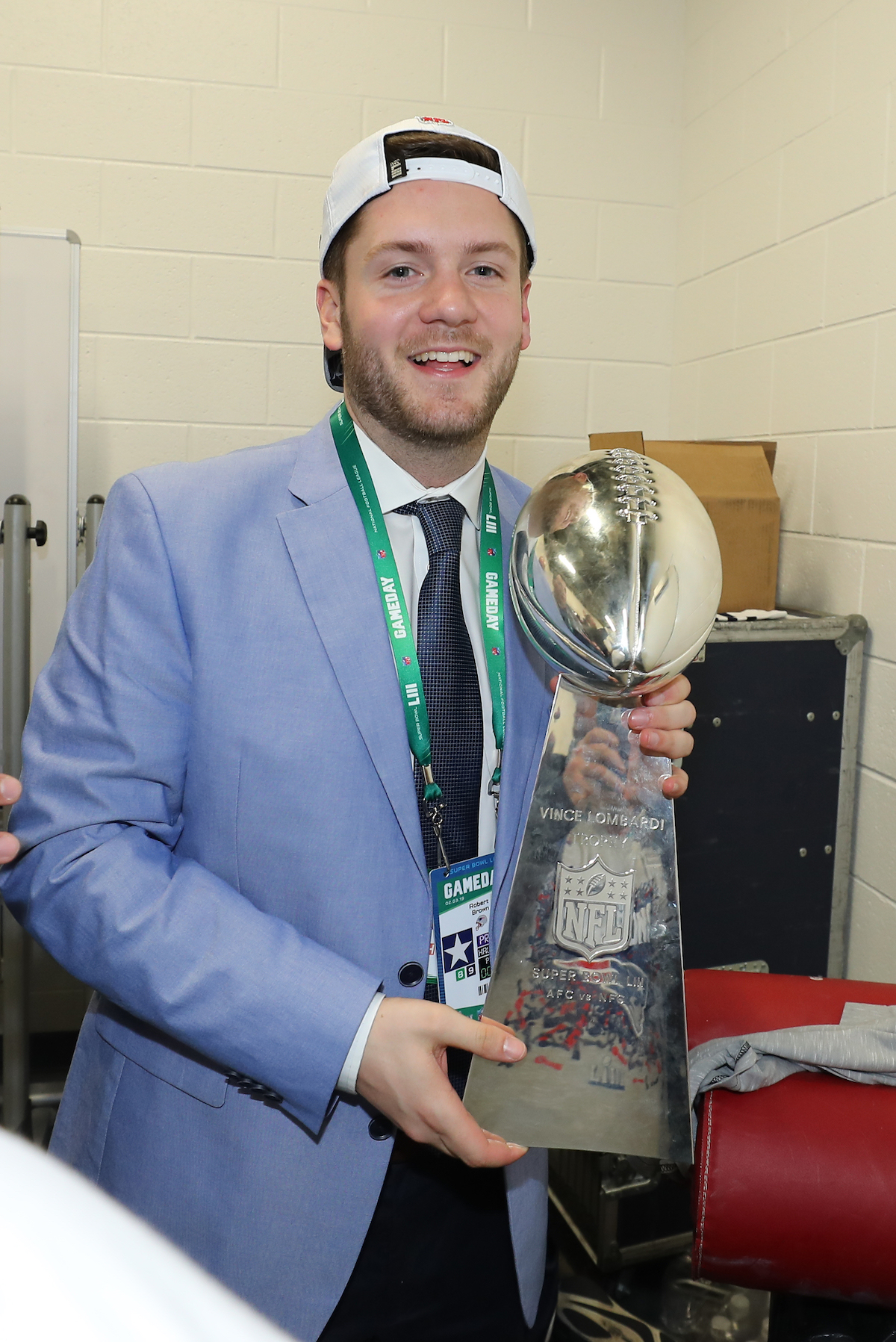 Brown with the Vince Lombardi Trophy following the Patriots 13-3 victory over the Rams in Super Bowl LIII. Courtesy of the New England Patriots/David Silverman.

For New England sports fanatics, the Patriots are often associated with boisterous fanfare. But for Bobby Brown ’14, the team’s coordinator of football operations and team travel, the “Pats” are an opportunity for quiet, humble service. Brown started at the organization as an equipment intern in 2016, and quickly caught the eye of Head Coach Bill Belichick, himself. How? “A servant’s heart and focus on servant leadership,” Brown says.

An amenable attitude has led Brown through three positions and three Super Bowls with the Patriots. From “running around on the field grabbing footballs and doing laundry, and really whatever was asked of me” to now managing their day-to-day, Brown has found his position on the team.

He made the best of his supportive role, and even found it to be a good fit as he learned more about his strengths, skills and motivations. “Being in an intern role,” Brown says, “you find that if you have a heart to serve others and the greater good . . . you’ll find yourself going out of your way to go above and beyond and take on more responsibility.”

In season and out, Brown’s days consist of long hours and extensive travel as he supports the players, coaches and staff. In season, he’s ensuring that the team’s needs are met. When they’re on the road, that means arriving a few days early to confirm hotel and meal arrangements, airport arrivals and stadium logistics. On game day, he’s up early to make sure the busses are ready to go, and during the game, making sure post-game food is set up.

Off season, he keeps up the busy pace. Some days he’s arriving at Gillette Stadium to prep spaces for practice and meetings, and making himself easily accessible for troubleshooting. Other days, he’s on the road to scout out hotels and accommodations for the team to use in the season to come.

“This is a perfect job for me because I’m behind the scenes,” he says, “but I’m always with the team, serving the coaches, players and owners.”

Brown has risen in rank over the years, he but he still makes an effort to learn from his colleagues every day. “I’ve learned to always stay humble,” he says. “There’s always something to learn, improve on or be more efficient in . . . I always try to learn more and ask questions. You never want to think that you know everything.”

Brown’s other source of wisdom, though, is his Christian faith. With a demanding schedule year-round—which often means he’s missing family events and holidays—he says the key to staying strong is maintaining a routine of prayer and reading the Bible.

“You feel the highs and lows, but . . . being a Christian man, you can identify with Christ in the lows, and the losses don’t define you,” says Brown. “It’s terrible to lose, but it’s important to remember who you really are in God.”

← A Cure for Communication
Be thankful no matter what: “Deepening the Faith” devotional 20 →
Loading Comments...