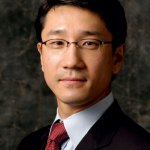 Bill Park has been with State Street Bank and Trust Company for 18 years. He started in its Boston office, and in 2005 became Korea branch manager; at 33, he was the youngest country manager in the firm’s history. Now a senior managing director, he has grown the size and scope of the office, helping Korea to become one of the most important markets for State Street. As Asia-Pacific chair of State Street’s Global Giving Campaign, Bill has led his Seoul office to partner with Yeomyung School, an alternative middle and high school that helps North Korean teenage refugees adjust to life in South Korea, resume their studies, and prepare for university. “I’ve had the great fortune of being an entrepreneur while working in a large global company,” he says. “Developing others to become better leaders is one of the most rewarding aspects of my career.”