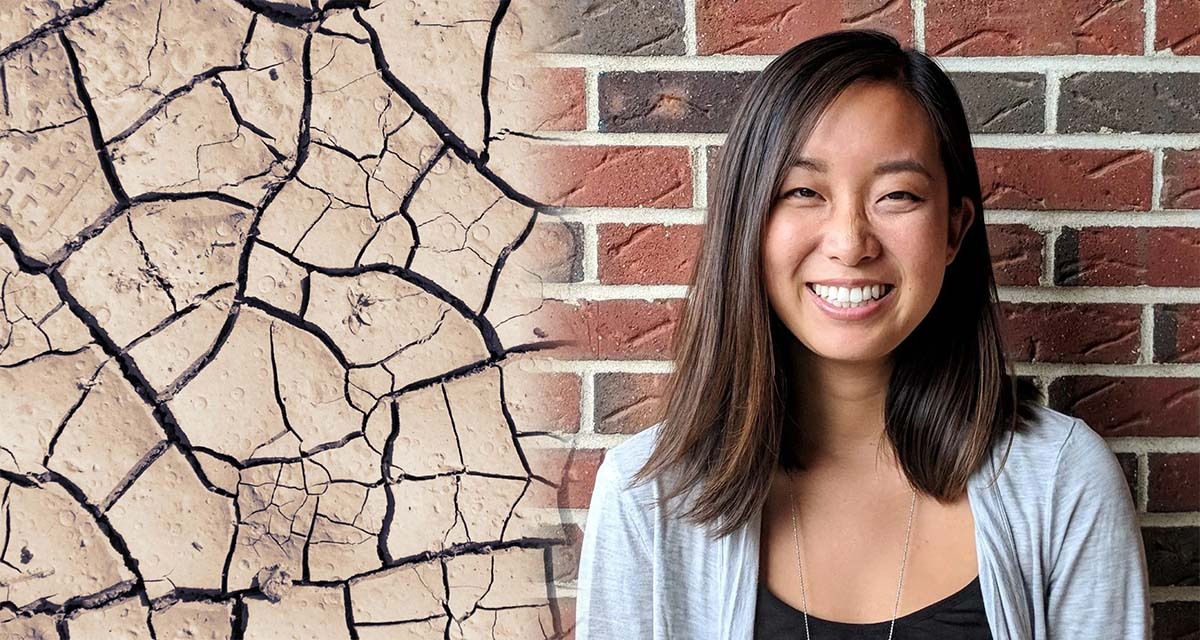 Wisdom From Dawn: An Alumna on Identity, Poetry and Belonging

In 1999, a then five-year-old Melanie Hyo-In Han ’16 watched as her neighbor collected the bodies of young children who had died from dehydration and placed them in a wheelbarrow. Tanzania was experiencing a “drought with a capital D,” writes Han. “I lay there on the ground with one ear against the pounding heat of the land drowned out by the beating of my heart. Sandpaper tongue, parchment lips, dry and cracked, where life had given up and succumbed, too weary to continue.”

That experience, which would later become the inspiration for the titular poem of her new book Sandpaper Tongue, Parchment Lips, is one of many that Han recounts to illustrate the complicated aspects of having a multi-cultural identity. A self-described “third-culture kid”—a child who grew up outside of both their own country of origin and the country of their parents—Han was born in Korea and raised in several countries in East Africa. And this month, she Zoomed in to Homecoming and Family Weekend from Seoul, South Korea, to share her new collection of poetry with the Gordon community. Here are some of the highlights Han discussed during her public reading and interview with Professor of English Mark Stevick.

As an adult, Han is known as many things—an award-winning poet, a teacher and a published author. But for the first eight years of her life, Han was known by her birth name, Hyo-In, which means “wisdom from dawn” in Korean. In Sandpaper Tongue, Parchment Lips, Han recalls sitting in a classroom with dozens of other students and being the only one to never be called on by name. “All I ever wanted was to be called on without hesitation and be greeted every day,” she writes.

This, Han says, was one of many tensions between her heritage and her desire to belong. Now a teacher herself, Han is careful to learn to pronounce all her students’ names. “I would be intentional about saying [their names] to myself so that I could call on them without hesitation,” she says.

In a poignant poem from her new book, Han recalls a letter that her Korean grandmother wrote to her, encouraging her not to lose her Korean language and heritage. When she received the letter, it “felt like a jumble of words.” After running it through a translating service, her grandmother’s heartfelt words to her became unintelligible. “My dear yeast,” it reads. “Show me your fertilized love giggles.” Han describes her poem “My Dear Yeast” as a practical illustration of the difficulties of translation, where meaning and nuance are often lost between one language and the next.

As Han has grown up, she has grown more connected to her Korean heritage. She goes by Melanie Hyo-In Han, no longer omitting her birth name. She teaches English and Spanish to Korean high school students and translates poetry between English, Spanish and Korean. Her family has been able to read her poems—her way of processing her often tenuous childhood struggle with identity and belonging.  “They are really proud of me,” she says, in response to Stevick’s question about how her family responded to this collection of poetry. “They appreciate how they were able to be a part of this journey. I think they understand that I had to kind of think through my past and learn from my own experiences.”

Han called Tanzania, Kenya, and South Africa home for the majority of her developmental years. She remembers constant uprooting and disruptions as her family made frequent moves due to their work as missionaries. This, she says, ultimately made her a more adaptable and cultured person. “I became very flexible in terms of integration into different cultures, different locations,” Han says.

Still, the moves were not easy on Han. “I think that also meant that it was hard to figure out who I am,” she says. “Especially growing up, I really did struggle with that. Am I Korean enough? Am I American enough? Am I East African enough? But at this point, I think I’ve learned to accept that I am a combination of all of these cultures and [started] to feel more comfortable in my own skin.”

In Sandpaper Tongue, Parchment Lips, Han reflects extensively on the tapestry of cultures and experiences that make up her identity. Writing the book, she says, was a way to process through the good and bad parts of growing up with pieces of so many countries and cultures.

From struggles with finding her own identity to working through the anxiety and confusion she struggled with as a child, Han has found that writing poetry is soothing to those old wounds. “Writing is not therapy, but it is ‘therapizing,’” she says. “It does provide some sort of way to reflect and think through emotions and the past and process.”

Watch the full interview on YouTube, and to get your own copy of Sandpaper Tongue, Parchment Lips, visit Finishing Line Press.

By Anna Landry ’22, Pike Scholar in Strategic Marketing and Communications