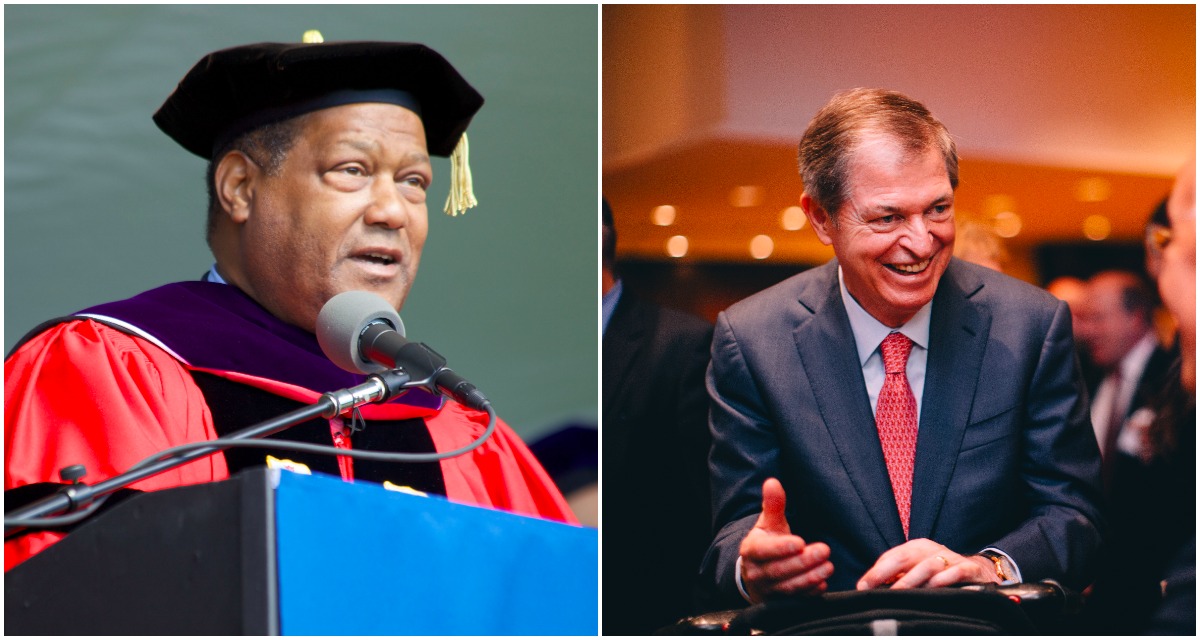 The College’s Board of Trustees is under new leadership, and Homecoming will provide an opportunity for the Gordon community to meet these leaders at a “Conversation with the President.” On October 1 at 1 p.m., President Michael Lindsay will host Chairman of the Board of Trustees Herman J. Smith (pictured above, left) and Vice Chairman Myron “Mike” Ullman (pictured above, right) in a discussion on their individual backgrounds, professional journeys and vision for the College.

But before they step into the limelight, The Bell spoke with Ullman and Smith to learn more about the personalities behind the suits. Their résumés are impressive, to be sure, but there’s more to our chairman and vice chairman than meets the eye.

Herman J. Smith Jr. ’70, chairman of the Board of Trustees

Smith is a lifelong Bostonian who studied political science and history at Gordon. He earned a J.D. from Boston University School of Law in 1974 and was appointed an associate justice of the Housing Court, City of Boston Division in 1990. In 1994 he was appointed an associate justice of the Massachusetts Superior Court, where he served for 17 years until retirement. Smith began his term as chairman in February, and has been a member of Gordon’s Board of Trustees since 1983, serving in three presidents’ terms. Smith is also in his second term as moderator of the Board of Elders at Park Street Church.

Myron “Mike” Ullman, vice chairman of the Board of Trustees

Ullman has led five major enterprises on three continents (he’s lived in Europe, Asia and the U.S.), most recently serving as CEO of J.C. Penney until 2011. When he returned for another two years in 2013, he was largely responsible for rescuing J.C. Penney from folding. Ullman joined Gordon’s board in 2013 and also serves on the board of Starbucks Coffee Company; the board of FIRST, a charity that sponsors robotics competitions designed to motivate youth to pursue education and STEM careers; and the chairman of the board of Mercy Ships International, a global medical and human services charity. He is the former chairman of the Federal Reserve Bank of Dallas.

Event details
Conversation with the President: An Interview with the Board Leadership
October 1, 2016, 1–2 p.m.
Gregory Auditorium, Jenks Library (room 237)

← Gordon Hosts New York Times Columnists at NEXT Summit
Tales of a Nomad in New Zealand: Travels and Transitions →