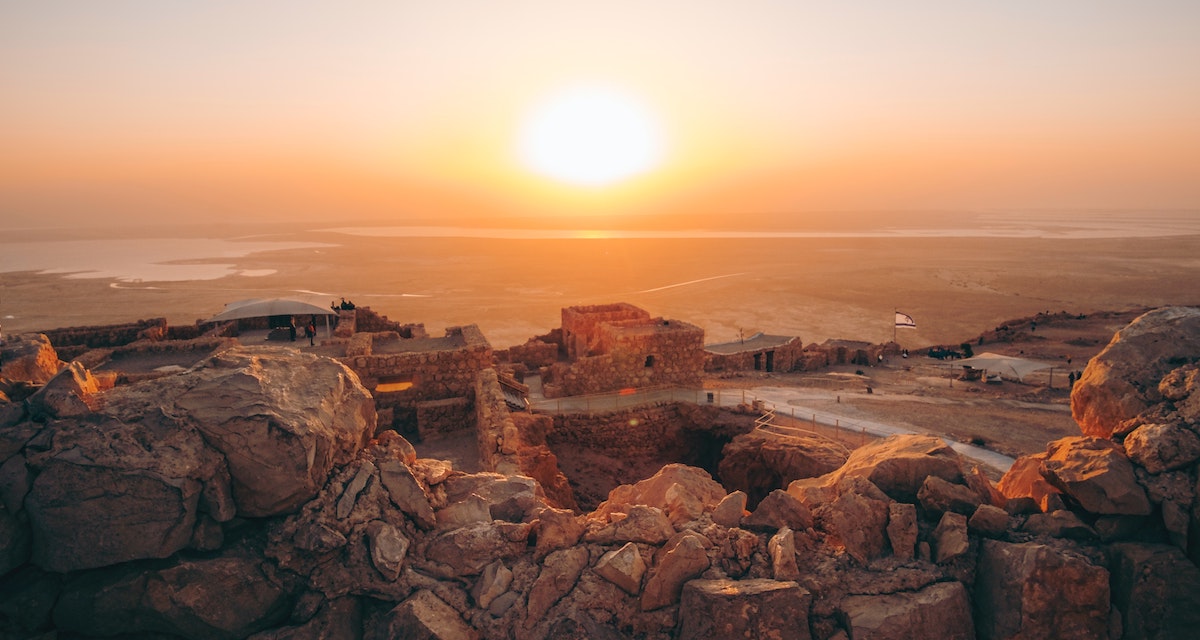 5 Things You Didn’t Know About the Christmas Story

While her fellow Israel Seminar classmates gathered at the base of the Masada mesa to hear a presentation, Gordon sophomore Nicole DePue ’08 began her ascent alone. To make it to the top at the same time as her peers, she needed an hour head start. “Walking is not an easy task for me,” explains DePue. “I wasn’t sure my feet could handle this. [I couldn’t guarantee] they weren’t going to be in so much pain that I couldn’t do the rest of the trip.”

Ever since DePue was little, doctors couldn’t figure out what was wrong with her feet. They predicted she’d be wheelchair-bound by the time she was 13, but an experimental surgery helped her retain the ability to walk, albeit with some difficulty.

That day it took DePue three times as long to reach the top of Masada. She wasn’t sure she was going to make it, which is why it came to her mind a few days before Christmas this year.

There are several arduous journeys at the heart of the Christmas story. Mary and Joseph travel from Nazareth to Bethlehem. The magi travel to Nazareth from the East. Mary and Joseph take Jesus to Egypt to avoid the wrath of Herod. “I understand what it’s like to rely on God to get through a physical challenge to do what he’s called you to do,” says DePue. “I spent the full trek going up Masada praying. And I am sure on the way to Bethlehem, Mary and Joseph prayed the whole way.”

Because these journeys only take up a few sentences in the Bible, there is much left to our imagination. To understand the risks Mary and Joseph took to bring the Messiah into the world and the lengths the magi went to just to meet him, The Bell interviewed biblical geographer Nicole DePue ’08.

Here are five things you probably didn’t know about Christmas:

Jesus Was Likely Born in the Spring

Have you ever asked yourself why Mary and Joseph would wait until Mary was almost nine months pregnant before making their 80-mile journey to Bethlehem for the census? Why didn’t they leave sooner? We’ll never know for sure, but DePue has one possible explanation.

“Back then many women died during childbirth. The littlest thing could have terminated her pregnancy,” explains DePue. “She could have gotten a fever. And during the winter season, it’s rainy and would have gotten below freezing quite a bit. It would be very dangerous for Mary. That’s why I lean toward it not being winter.” Joseph would have waited until it was safe to travel, even if that meant Mary was days away from giving birth.

So, if it’s unlikely that Mary and Joseph made the journey to Bethlehem in the winter, then when was Jesus actually born? No one knows. Birthdays were considered a pagan tradition and weren’t celebrated in Jewish or Christian households until much later. Eventually, DePue says, “Christianity wanted to cover all non-Christian holidays by having their own holiday in place of it. The winter pagan holidays merged with Christmas.” Before Christmas was celebrated, December 25 was a Roman holiday celebrating the birth of the sun god, Mithra.

Considering the dangers of travelling in the winter, DePue thinks that Jesus was born in the spring because that explains why Joseph and Mary would have chosen to travel at the end of her third trimester. They may have had no choice but to wait.

The Journey from Nazareth to Bethlehem Probably Took a Week

If the current hypothesis among biblical scholars stands—that is a four-day journey from Nazareth to Bethlehem—Mary and Joseph would have had to travel about 90 miles in four days, averaging a 2.5-mph pace for roughly eight hours a day. That doesn’t leave time for Mary and Joseph to take breaks to go to the bathroom, cook or eat meals, or catch their breath, says DePue.

“Most Bible scholars, in my experience, are men,” she says. “And I don’t think they really understand what it would be like to travel as a pregnant woman in her third trimester.”

Aside from the practical problems of not getting to take bathroom breaks and eat food, the four-day hypothesis implies something else that DePue isn’t comfortable with. “A four-day journey [would indicate] that Joseph doesn’t care about Mary. There was no need to rush. I think Joseph would have taken a slower pace for Mary’s sake. He would have prioritized her health and safety.”

With these things in mind, DePue thinks that Mary and Joseph averaged two mph and 12 miles (six hours of travel) per day. In total, she estimates their journey took about one week. DePue even took the time to map out their possible itinerary:

The Jordan River Valley offers freshwater, edible plants (e.g. date palms) and safety from the Samaritans. DePue thinks the two camped close to the river. Because Mary was pregnant and unmarried, it was likely that many of their relatives didn’t accept them, so they may not have had the option of staying in villages.

Day 5­–6: Jericho/North end of the Dead Sea to Jerusalem

DePue estimates that the journey from Jericho to Jerusalem would have taken Mary and Joseph two days because it’s an ascent the entire way. “The Dead Sea is the lowest place on the face of the Earth. Jerusalem is in the hill country.”

This is the shortest leg of the journey. It’s five miles downhill. They would have passed by the city of David, which lied to the south of Herod’s Jerusalem.

The Journey to Bethlehem May Foreshadow Palm Sunday

The Magi Were Most Likely Ancient Astronomers from Babylon

The magi are the most mysterious of the Christmas story characters. We’re not exactly sure who they are, where they’re from or how they knew to follow the star to Jesus. “We know they come from ‘the East,’” says DePue. “Babylon is referred to as ‘the East’ other places in Scripture. Nebuchadnezzar came from ‘the East’. The Jews in the diaspora under Daniel went to ‘the East.’ ‘The East’ usually meant Babylon.”

And although their name sounds like an abbreviation for magician, DePue says, “They didn’t perform tricks or magic. They were diviners—people who looked to the stars to gain perspective. They were astronomers/astrologists.”

On today’s map, Babylon would be pretty close to Bagdad, Iraq, which means the magi would have travelled more than 900 miles to meet Jesus. By the time they got to Jerusalem, they were looking for a child, not a baby, which implies that they had been travelling for a long time. DePue points out that in the Bible the magi find Jesus in a proper house. There are no animals. There is no manger. “This makes me think that Jesus was already in Nazareth when the magi came,” says DePue.

Another reason for why DePue thinks the magi found Jesus in Nazareth is because of the route they took home. “The magi went home a different way to avoid Herod in Jerusalem,” she explains. “If they went to Bethlehem, the only way to avoid going through Jerusalem would be to add to what was already a very long journey. It’s too long. It wouldn’t make sense.”

We hope these five insights from Nicole DePue help you experience the Christmas story in a fresh way and deepen your appreciation of what Mary, Joseph and the magi went through to welcome Christ into the world. Merry Christmas!

Header image: Ancient ruins at the top of the Masada mesa in Masada National Park.

← How the Pandemic Changed the Tune for Gordon’s Musicians
Advent Meditations from La Vida: Walking with Presence →
Loading Comments...