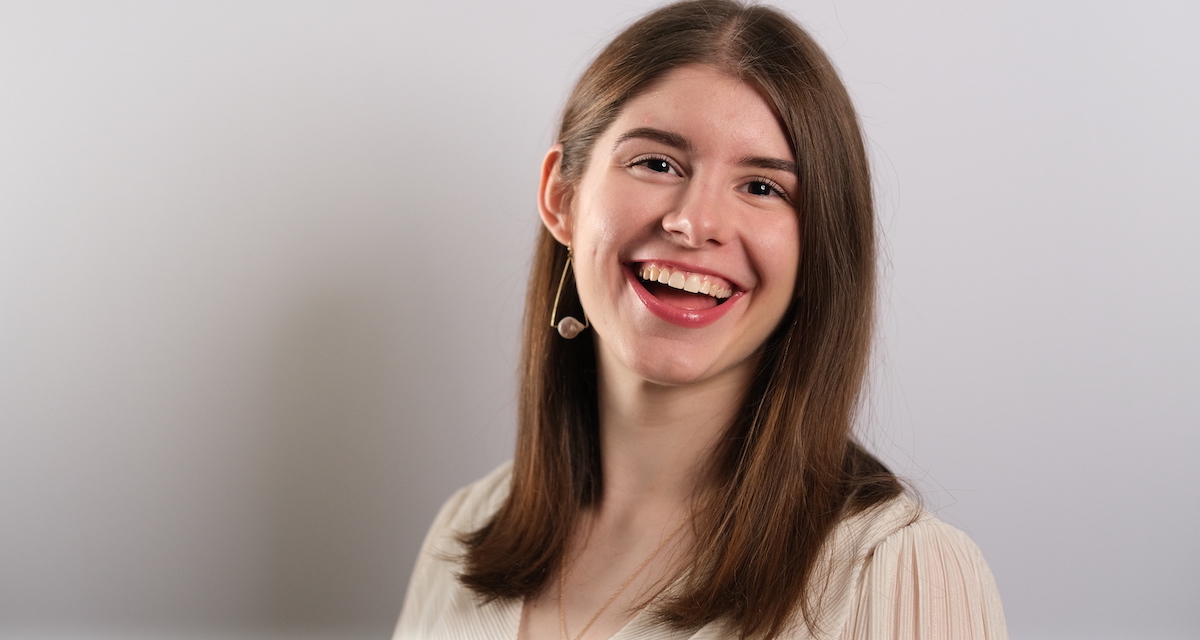 Throughout history, musicians have discovered settings that spark their creative process. Anton Dvořák wrote his monumental New World Symphony while visiting the United States. For Felix Mendelssohn, it was the dramatic landscapes of Italy and Scotland. Gustav Mahler retreated to an Austrian oasis to compose on the shores of the Wörthersee. And George Gershwin heard Rhapsody in Blue unfolding on a train ride from New York City to Boston.

Like them, music major Hunter Hess ’22 is finding formative inspiration in her surroundings. For 10 weeks over the summer, the landscape of her latest musical journey was colored by the warm tone of brass horns, an awe-inspiring sweep of the harp and long, sunny days at the Talcott Mountain Music Festival in Connecticut.

During an internship with the Hartford Symphony Orchestra, Hess took her next steps in exploring a future in the world of music. “I’m a big learner,” says the Long Island native, who is eager to experience opportunities from the front row. “This internship has given me a glimpse into what work I could possibly do in the future.”

Born to a singer mother and trumpet-player father, Hess set her eyes and ears on music at a young age. Tapping keys turned into teaching herself piano in second grade, and over the years she also picked up the guitar, bass guitar and saxophone. When she found herself coaching her peers in high school music theory and music history classes, Hess realized she could turn her skills and interests into a profession.

She entered the Department of Music at Gordon and became even more engrossed in the field. In and out of Phillips Music Center, she dove deeper into the boundless world of art and began unraveling deeper questions.

“One of the things I really enjoyed about music history was learning about the context around the time periods and how the ideas, the philosophies, intellectual movements influenced the music,” says Hess. “And I’m aiming to study more of the philosophical side of music—what makes music beautiful.”

Hess takes every opportunity to soak up wisdom from her mentors. The 40 minutes setting up for Symphonic Band as the TA alongside Conductor Benjamin Klemme are a Socratic scene where she brings her questions and learns about life as a music professional. Divulging her interest in music theory to Adams Endowed Chair in Music Sarita Kwok, Hess is offered books and deep conversation. “Everyone in music is supportive, loving and intentional about caring for their students and making sure they succeed,” says Hess.

Participating in the inner-workings of a professional orchestra in Hartford this summer provided another glimpse into the field. With the orchestra’s education department, Hess prepared craft packets for kids. She helped development foster donor connections and deliver concert tickets around town. Before concerts she assisted the operations manager with whatever backstage tasks needed a hand, like handing out sheet music to musicians and making sure they were fed. Hess was especially invigorated by two special opportunities: spending time with the orchestra librarian as they pulled sheet music and driving a guest musician to the venue. Days on the job revealed the details that sometimes go unnoticed, but ultimately put an orchestra onstage and help an audience enjoy the music.

Amid the buzz of activity, Hess sought out off-the-job opportunities to soak up her surroundings. “Some of my favorite parts were when I had downtime and got to listen to the rehearsal,” she says. “It’s just amazing to be able to sit there and listen and watch the conductor do her job.”

Hess still aims to teach music in college, but reflecting on the summer experience she says, “The internship was an opportunity to open my eyes to a different aspect of the music professional world and prepare me if God leads me elsewhere than where my current trajectory is.”

← Good News from Program Approval for Gordon’s School of Education
How to Think Like an Entrepreneur →
Loading Comments...