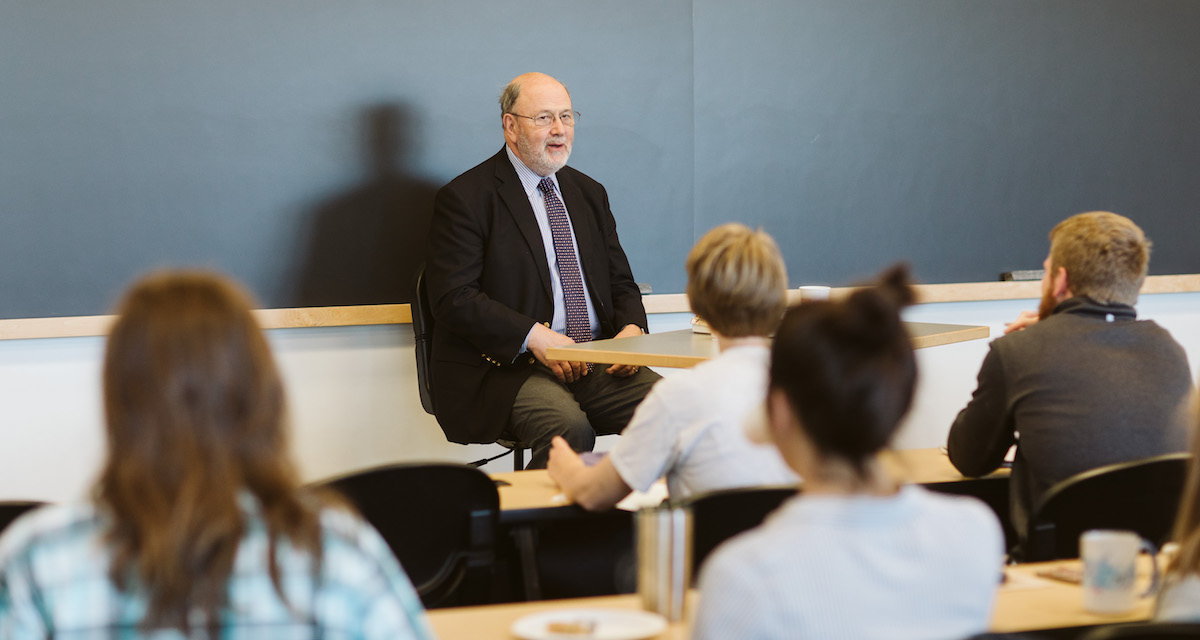 An Interview with N.T. Wright: Part 2

During N. T. Wright’s recent visit to campus, The Bell had a chance to sit down with the renowned theologian, scholar and author. This is Part II of a two-part interview with N. T. Wright.

The Bell: You talk about looking at early history and putting it into context today; given that, what sort of narrative arch do you see? Or do you see one?

N.T. Wright:What’s happening now is always deeply puzzling. It’s rather like trying to psychoanalyze yourself. Christians have oscillated, in the last 300 years, between optimism in the early 18thcentury—that the world is getting better; we just have to preach the gospel a bit more and soon the whole world will become the Kingdom of God—and pessimism of the late 18thcentury onwards after many Western Christians swung the other way, saying, “The world is getting darker, stranger and more dangerous, and there will only be a few Christians left on earth when Jesus comes back to snatch them away and take them to heaven.”

I think most Christians today reject both but aren’t quite sure how to articulate a third entity. We know that, in the present stage between the resurrection and the final dénouement, our task is not necessarily to know what’s going on because we’re experiencing suffering—intellectual suffering, of not always understanding everything, and emotional suffering, of not always seeing what we think ought to happen fulfilled.

What questions do you think culture is asking about Christianity?

I think Western culture is still scratching its head and saying, “Might it be true after all?” Or, “Granted it isn’t true, how do we retrieve some bits from it anyway?”

In 2000, in the National Gallery in London, the director—then Neil MacGregor, a Christian man—organized an exhibition called Seeing Salvation. Greatworks of art expressing Christian faith from the later 2,000 years. Of course, most of the exhibition was about the crucifixion. The newspapers said, “Ugh, why do we need to see all this old horror? We’re in the modern world. This is all just dark, insidious stuff.”

The general public ignored the newspapers and came in droves—just people standing in front of medieval paintings of the crucifixion, letting them speak to them.

What it is about Leonard Cohen’s song Hallelujah that has made it such an incredible piece for our time? The last line, “That even though it all went wrong, I’ll stand before my Lord in song with nothing on my tongue but hallelujah.” That’s a great line. You know Cohen was a funny old stick, but I just kind of honor that poem as a way of saying, “Yeah, maybe it’s all chaotic, but we, as humans, simply have to stand before the Lord and say hallelujah anyway.” I think that’s a genuine bit of postmodern “both/and,” which I really like.

Isn’t that interesting? One of the things I think we’ve become more aware of now is that many people in traditional Muslim countries—Saudi Arabia, Iran, etc.—actually have dreams about Jesus. Not because an evangelist has been telling them about Jesus, because that’s illegal.

That to me is absolutely fascinating.

Have there been experiences as a parent and as a grandparent that have helped you understand theology?

Yeah, and experiences that have reduced me to silence. I was on a walk in the Scottish islands two years ago with my grandson. Suddenly, six-year-old Sam, holding my hand, walking on a path up the side of a hill says, “Grandfather, what is the meaning of life?” Completely out of the blue. My mind went ping, ping, ping through all kinds of things, all of which I felt were trite. I said something like, “Sam, we’re going to sit down this evening and have a really good chat about that.” I felt cheerfully humbled by that.

I could just say a trite thing like, “The meaning of life is to care for one another or to honor God in all our ways,” but we haven’t gotten near the heart of it yet. Anyway, God-willing, Sam will forgive me and will learn [the meaning of life] as he grows up.

There are many times in family life when things happen of great profundity, great sorrow, great shock, great delight.

Did you miss Part 1? Read An Interview with N.T. Wright: Part 1.