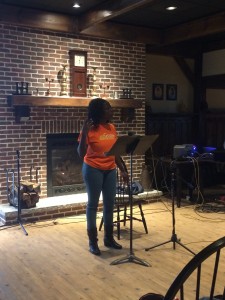 Gordon College’s International Student Organization (ISO) recently hosted its spring coffeehouse in Chester’s Place. Taking a different spin than typical coffeehouses put on by the Campus Events Council (CEC), the event serves as a platform for ISO members to share performance art from their various cultural backgrounds. ISO is a student-led organization that seeks to meet spiritual, practical, and emotional needs of Gordon’s international students by creating opportunities for fellowship and intentional relationship building. ISO also seeks to connect and enhance appreciation for different cultures within the College community.

ISO leaders host coffeehouses every semester as a way of celebrating the cultural diversity together on campus. “It celebrates spring and shares different cultures on campus. Mostly it shows how other people celebrate around different parts of the world,” said Nate D’Andre ’17, an ISO leader. D’Andre is an American citizen who grew up in Ukraine. The other ISO leaders for 2014–15 are Hannah Kappler ’15, a Korean-American who grew up in Kazakhstan; John Lim ’17, a Korean who also grew up in Kazakhstan; Anna Yeo ’17, who grew up in Virginia and Taiwan; Danny Bizumuremyi ’17, who is from Rwanda; Shruthi Waduacharige ’17, a Sri Lankan citizen; and Juhye Lee ’15, who is Korean, but grew up in Taiwan.

The evening’s eight performances came from students representing at least 12 different cultures from all over the world. Highlights included a Rwandan hip-hop/rap dance act by Danny Bizumuremyi, a Kenyan spoken word poetry composition by Grace Aghan ’17 (Kenya) titled “This is For Saying Yes,” and a brilliant 30-second Ukrainian song from Nate D’Andre.

A crowd of students and ISO members packed into Chester’s, sipping coffee and enjoying dinner while supporting their performing friends. More fantastic presentations came from Grace Aghan and Christa Hammaker ’15 (U.S.) who sang a tribal African song together, as well as Daniel Song Shimba (Brazil) and Tim LeBlanc ’17 (U.S.) who each shared their skills on the guitar.