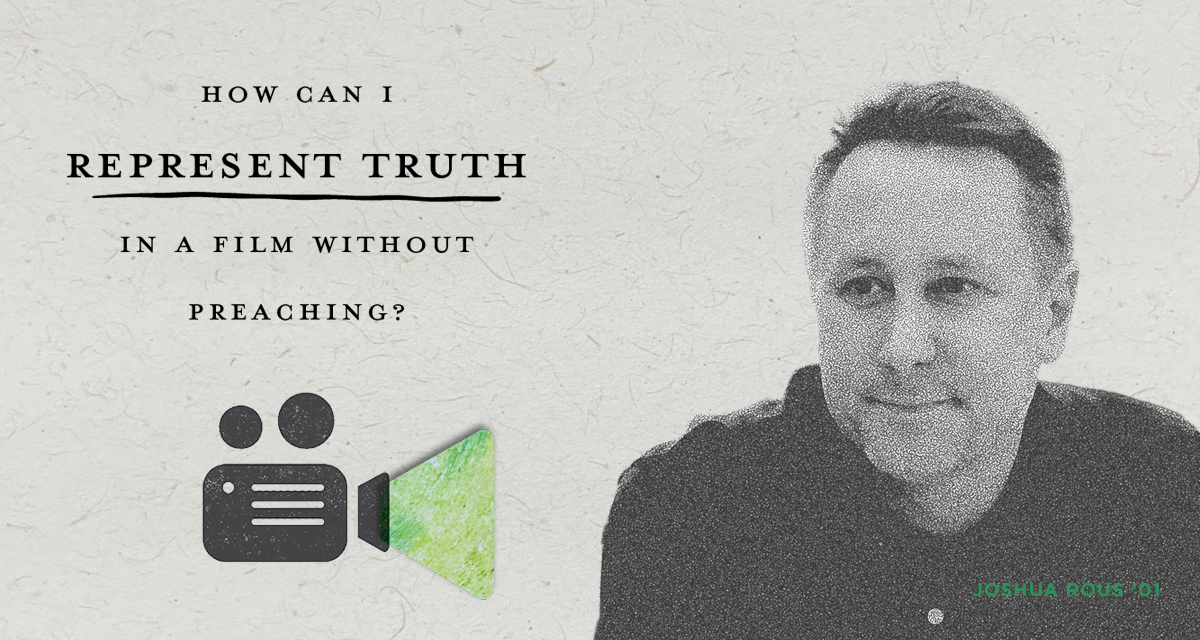 There’s a moment in Of Mice and Men when the reader discovers that Lennie has a dead mouse in his pocket that he’s accidentally killed from petting too hard. It’s alarming, sure, but it illustrates what can happen when a person tries to possess something precious—like a mouse in a jacket pocket or, in Joshua Rous’ case, a Christian message within a film.

In 2008, South African filmmaker Rous ’01 (economics) made his first feature length film, Discreet. It’s about a Christian man who hires a prostitute, but not for sex. “He goes to her under the auspices of maybe wanting to have sex with her, but really to talk about sex as a sheltered, conservative Christian who’s never been able to talk to anyone about it,” says Rous. Unlike his sitcom City Ses’la, which was nominated for 14 SAFTAs (the South African equivalent of Oscars) after its first season in 2005, Discreet was a commercial disaster. “Nobody went to see it in theaters,” remembers Rous. “Watching it now, I cringe a bit because it’s very preachy in parts,” he says. “I was like Lennie from Of Mice and Men killing my little pet with affection.”

In trying so hard to convey the film’s Christian message to its audience, Rous accidentally squashed the truth in the process. He explains, “The male character, Thomas, is often trying to say the thing a pastor would say as opposed to what someone would really say in that situation.”

Now nearly 14 years after Discreet’s release, four SAFTA wins and 25 directorial credits and counting, Rous is still figuring out how to represent truth, grace and forgiveness in a film without preaching. “It’s very hard to do,” he concedes. “It’s still the thing I struggle with the most.”

The films and shows that succeed in representing the truth, Rous explains, are the ones that don’t shy away from darkness or vulnerability. “I think, as Christians, we’re very afraid of representing too much ‘bad,’ too much darkness,” he says, “so we kind of veer away from what might otherwise be a compelling, beautiful story. We tell the story through a filter.”

But the authors and characters of the Bible don’t filter their stories, Rous points out. “Even Jesus used violence in some of his parables, like the Good Samaritan,” he explains. And Scripture records people in their most vulnerable moments—hiding their nakedness from God in the Garden of Eden, being sold into slavery by their own brothers, lusting after married women on rooftops, or being nailed to a Roman cross.

“There’s a degree to which we all want to conceal ourselves,” says Rous. “There’s this great sense of not wanting to appear too weak, and yet weirdly that’s the thing we gravitate to as humans. The most beautiful stuff comes from trying to be super vulnerable . . . There’s something about the truth of somebody’s human experience that is beautiful to us and compelling, which is why I think stories are so much part of the fabric of life.”