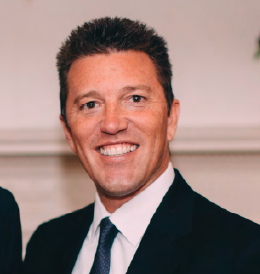 In 1988, three years after graduating from Barrington (now Gordon College) and during his time on a worship team at a church in Los Angeles, Bob Weil ’85 bought a guitar volume pedal that was driving him crazy. For Bob, it was missing two things: a smooth 0–10 scale to mark incremental volume levels and a way of recognizing each volume level visually—a feature that would allow a musician to gauge sound not just by ear, but by sight.

Since such a pedal did not yet exist, Bob decided to make one. But as a musician and business administration grad, he had little mechanical knowledge of how to build it. Googling instructions was out of the question, given that it would be two years before the emergence of the World Wide Web and 17 years before YouTube. So, he frequented the library and learned to make his ideal guitar pedal by reading everything he could about building electronics.

With his new knowledge and a soldering iron, he came up with the prototype for Visual Volume, a pedal that helps guitarists gauge sound level via 10 LED lights, representative of the 0–10 scale that Bob had been searching for years earlier. In January of 1995, he started manufacturing guitar pedals under the name of his new company Visual Sound.

But even with a good product, Visual Sound experienced “a brutal first few years,” Weil says. Creating guitar pedals was a huge engineering challenge, the market for such a product was extremely limited, and, without investors, start-up capital was in short supply.

“Shortly after starting my business, [the words of] Tim Stebbings— the professor who taught my Small Business Management class—were constantly ringing in my ears: ‘Never start a business under-capitalized,’” says Weil, “which is, of course, exactly what I had done and why we were quickly falling into the debt spiral in those early days.”

In August 1998, it looked like Visual Sound was going to have to close its doors. Then, two weeks later, a couple of European distributors faxed in large orders for Visual Sound distortion pedals because they were selling so well in Germany and Great Britain. Since then, Visual Sound (now Truetone) has become a respected effects pedal company and has emerged as the #1 power supply company for musicians.

Truetone’s effects pedals like Jekyll & Hyde, Route 66 and H2O have been used on recordings by U2, Aerosmith, Bruno Mars, The Fray, Weezer, Blue Man Group, OK Go and Hillsong United, among many others.