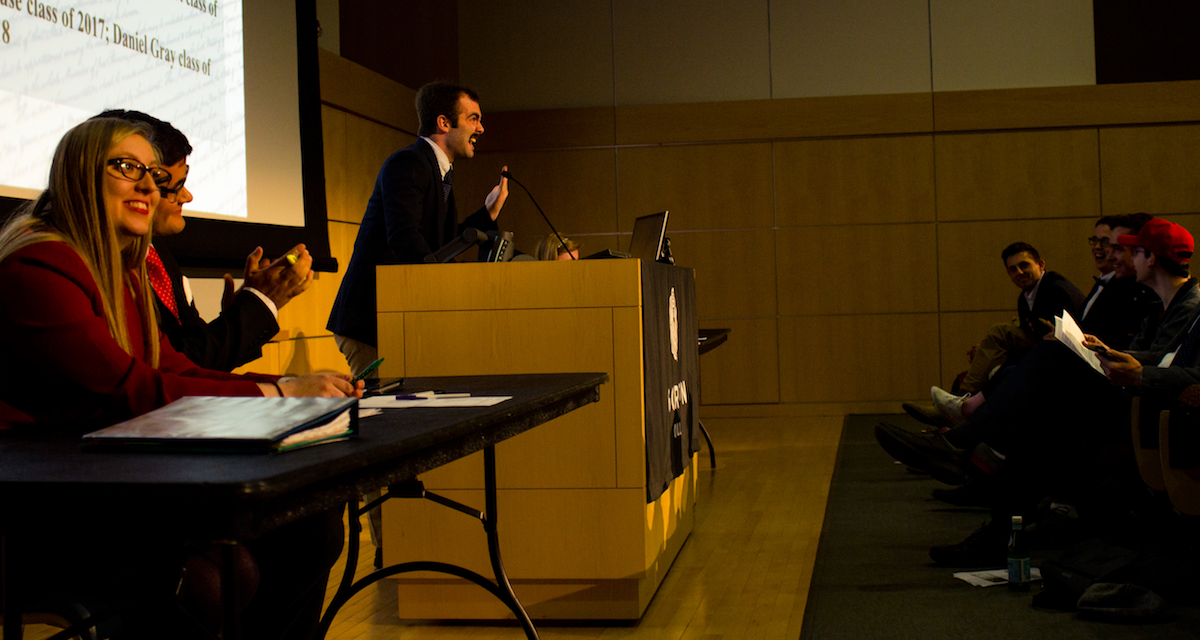 Despite recent examples of bipartisan dialogue being quelled on college campuses, nearly three-quarters of the 3,000 students surveyed in a 2016 Gallup poll viewed American freedom of speech to be “secure” or “very secure.” To keep that liberty alive, Gordon College participated in an open, across-the-aisle dialogue last week as the College Democrats and College Republicans held their first annual spring policy debate. Topics on the table: gun control and voter ID regulations.

The Democratic side, consisting of Taylor Valci ’19 and Nick Blondell ’19, began the debate on gun control with an emotional appeal regarding the mass-shootings that have proliferated in the U.S. in recent history. Valci agreed with the Republican appeal to protecting American civil liberties, but argued that it must be done in a manner that prioritizes prevention.

“Its liberty would be found in a country in which its citizens feel free to send their kids to school, go to the hospital or even go to a nightclub in Orlando without the fear of being killed,” Valci said as she concluded her side’s opening statement.

John Nadeau ’18 from the Republican side agreed with Valci’s call for proactivity, conceding that thorough mental health screening must be implemented in the gun purchasing process. But ultimately, he and his debate partner, Noah Henkell ’19, asserted that stringent gun control laws harm the American people’s individual liberty.

“Who called the militia to arms in Lexington and Concord? The citizens. Who called to arms to throw crates of tea into the Boston Harbor? The citizens,” Nadeau thundered in response to the Democrat’s attention to the militia clause in the 2nd Amendment.

Assistant Professor of Political Science Dr. Michael Jacobs moderated the debate and instructed the audience to vote not for which side they agreed with, but for whomever presented the more convincing argument. By this standard, the Democrats were found victors of the first debate of the evening.

Voter ID regulations was the topic at hand for the evening’s second debate. “We’re already worried about Russia hacking into our elections, and we’re going to put it all online now? That’s insane,” Kinyon said in response to the Democratic side’s support of the ERIC (Electronic Registration Information Center) system. “We need people to be there in person with pictures so we can ensure that democracy is maintained and that all of the civil rights people have fought for is respected.”

“How can we, in good conscience, ask single mothers to give up a week of work and to give up their money to buy groceries for a week to pursue an ID, just so they can vote?” Daniel Gray ’18 asked in support of his Democrat debate partner.

Buoyed by an entertaining closing statement by Republican debater Eric Kinyon ’19 and measured rhetoric from his partner, Jessica Vandervort ’20, the student audience deemed the Republican side’s argument superior in the second debate vote.

The bipartisan debate displayed student autonomy as the participants imparted the value of freedom of speech, and equipped students with a wealth of information on hot-button issues.