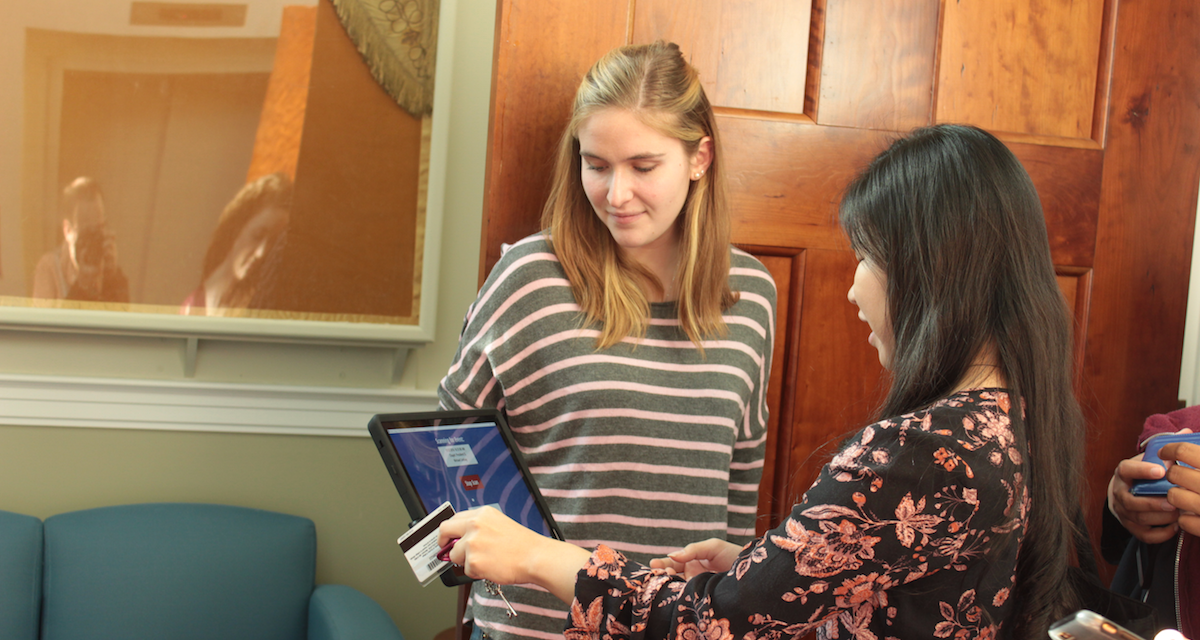 At 11:15 a.m. on Mondays and Wednesdays, a critical mass of students streams out of Chapel, some stopping next door at Lane Student Center for brunch and others scurrying across campus to their 11:25 a.m. class. The process of logging Christian Life and Worship (CLAW) credits as students exit has historically caused a bit of a traffic jam at the Chapel doors, sometimes taking close to 10 minutes for the line to clear.

Last year, Travis Pullen ’16 and Jonathon Manos ’16 made it their goal to reduce the Chapel checking clog. For their computer science senior project, the pair decided to design and implement a speedier process for logging CLAW credits and sending students on their way.

Over the course of their senior year, Manos and Pullen presented their progress at a total of 12 unique milestones that allowed them to plan around concrete deadlines and give their supervising professors a chance to gauge their progress. Within a week of releasing their new Chapelchecking device, the Chapel exit time had reduced significantly. And by the end of the semester, as students learned the art of tapping their cards quickly without missing the reader, the time was cut in half.

Manos and Pullen weren’t the only computer science students on a mission to make a difference with their senior projects. Josh Richard ’16, Jake Buettener ’16 and Dane VandenBerg ’16 created a program for an international nonprofit organization called Advancing the Ministry of the Gospel in Guatemala (AMGG) that allows Guatemalan natives to donate money to children in need within their area—something that has previously been difficult to do.

In both cases, the projects were designed to have a measurable impact on a particular audience in need. Even after the projects were submitted, students remained involved to fine-tune any issues that arose as their design became integrated into the everyday life of its users. In the case of the AMGG donation program, the students continued improving their product beyond graduation, readying it to go live on October 1.

This year, another cohort of computer science students is hard at work on their senior projects, turning their original ideas into fully functioning systems. “The primary goal of this course,” as described in the syllabus, “is to help you make the transition from the small-scale projects which have characterized your formal education to the kind of thinking and methodology needed for the medium and large scale projects which are typical in industry.”

Computer science seniors walk away from their yearlong project with real, tangible experience under their belt—and their impact extends from the Chapel walls into the world.