From Gordon to GE Capital—with stops in China and Hong Kong along the way—recent grad Dan Hurley ’15 prepares to bring two outstanding global business experiences to his first post as an investment analyst. His entrance into the finance world began with an internship at Ernest Maude Continental Investments Ltd. during Gordon’s Hong Kong Summer Finance Seminar last year. The summer-long program thrust Dan and his classmates into the bustling business sphere of Hong Kong. 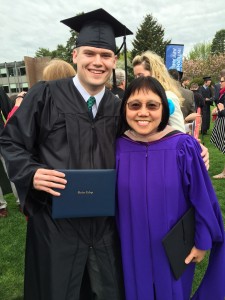 The Hong Kong Summer Finance Seminar is no walk in the park. Led by Alice Tsang (economics and business), the program creates exceptional learning and internship opportunities for students. Born and raised in Hong Kong, Alice knows first-hand how competitive the business climate is. “Being the gateway to China, Hong Kong is populated with branch offices of many of the world’s top companies,” she explains.

Students enrolled in the seminar take two finance courses at the Hang Seng Management College. The classes are demanding and offer a different educational environment than what students may be used to in the U.S. They also allow students to immerse in their surrounding environment as they study with local students, who are “hard-working and highly competitive,” Alice says.

Alongside his classes, Dan worked full-time for Ernest Maude, where much of what he and the group learned in the classroom was put into practice. “Being able to work closely with the management director and be mentored by someone who is a professional in that field confirmed my interest in finance,” Dan says. Not only was it an opportunity to gain insight and find answers to tough questions, but it was also a place that gave him self-confidence. “It made me realize I can handle the stress level and potentially get an MBA.”

Dan will hop on board with GE Capital at their Norwalk, CT, office in September. He’s especially grateful for the generosity of alumni like Greg Thonsen ’10, who helped connect Dan with GE Capital, where Greg formerly worked before moving to Golub Capital. Greg’s benevolence has sparked a desire in Dan to do the same—give back to Gordon by way of helping future graduates. Dan points out that it’s a way to pay back the help he has received, and to build the existing alumni network. “That’s one of the things about coming to a Christian college—people genuinely care. And Greg did this because he’s a Christian looking to help other Christians in a place where there aren’t a lot of us. I want to help someone like he has helped me,” says Dan.

Dan was also a member of the Gordon’s China Seminar during the summer of his sophomore year. “If I hadn’t gone on the China Seminar, I would never have gone on the Hong Kong Seminar,” says Dan. Led by Dr. Stephen Smith, the China Seminar is a 19-day tour of the country that introduces students to China’s economic policies and history, business environment, political system and culture. “Going with Dr. Smith to China really made me more excited to learn,” says Dan. Getting out of his comfort zone in China led Dan to realize his potential. “There are so many opportunities to better yourself by doing what Gordon offers. You just have to grab the bull by the horns,” he says.

Dan graduated this spring with a degree in economics and a solid base in accounting and finance. Apart from his involvement abroad during his summers, Dan played on the varsity basketball team for a year, and co-founded the Gordon College Investment Club with James Ek ’15 and Alice.