Decades of Influence in Education

“Life-changing, rigorous, loving community” were the words Teresa Rivera ’15 used to describe her experience in Gordon College’s Education Department. An elementary education and math double major, with a concentration in special education, she says “It’s not an easy program, but it’s well worth every challenge.” 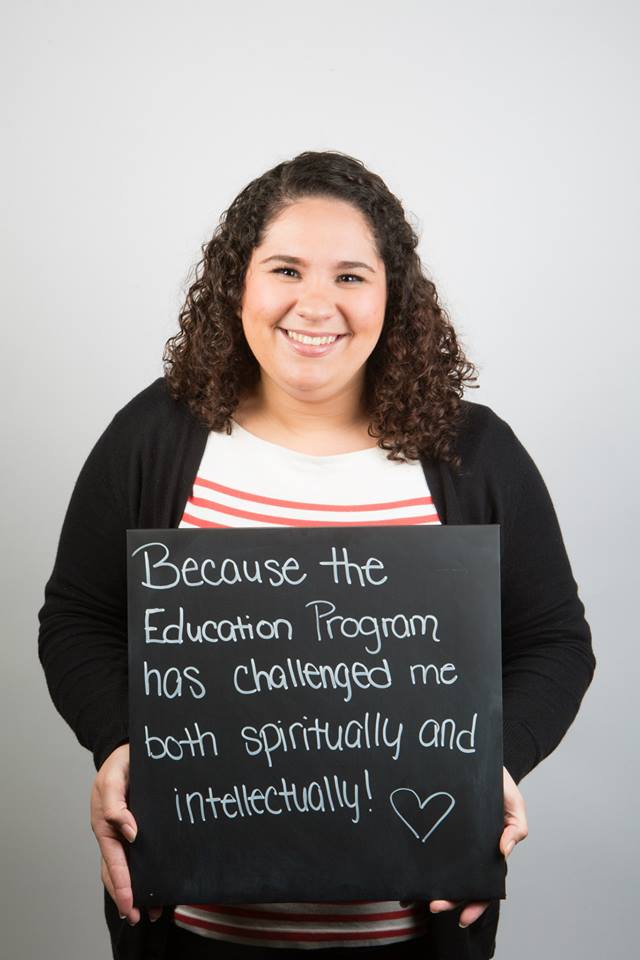 Teresa, on why her Gordon education matters.

Teresa accepted a position teaching third grade in Worcester, MA, just two weeks after completing her student-teaching requirement—an accomplishment she attributes in part to the department’s highly personalized approach. “This environment here is one in which the professors really push you. But it’s all about loving you and knowing that you can be a better ‘you’ than you were when you stepped in the door,” she says.

One of Teresa’s professors, Dr. Priscilla (Spoerer) Nelson ’74, was likewise influenced by Gordon faculty when she was a student more than 40 years ago. Now associate professor of education and chair of the early childhood, elementary and special education programs, Dr. Nelson recalls a scene from her Social Studies Methods class, taught by one of Gordon’s education legends—Dr. John Burgess—on the third floor of Frost Hall:

“One day he divided our class into small groups of five students each. Each group was given a stack of recycled paper, a stapler, ruler, pencils and scissors. We were instructed to cut the paper into two-inch by two-inch squares, put five squares together and staple them right in the middle. In three minutes we were to make as many as we could. We felt the pressure of the ticking clock while frantically trying to produce packets of squares. The bell signaled time was up and we counted up our squares.

“You may wonder why we did that. I know we were wondering! Dr. Burgess activated our learning by having us experience the concept of mass production through simulation. In doing so, we learned about efficiency, assembly work, cooperative learning, communication, problem solving—important vocabulary for our students to be able to use. This experience sparked conversation about engineering, and research and design. We worked across disciplines: social studies, math and language arts.

“This kind of experiential learning and problem solving stimulated a way of thinking that today is associated with STEM—a fairly recent term in education. Clearly Dr. Burgess was ahead of his time. His teaching methods are what we know to be best practices today. Gordon’s teacher preparation program was on the cutting edge back in the ’70s.”

Even now, more than 25 years after his time at the College, Gordon students continue to be impacted by Dr. Burgess. Today, the John A. Burgess Curriculum Library offers education majors exclusive access to a wealth of books and teaching resources—including a Smart Board, Ellison Prestige Pro die cut machine, Silhouette CAMEO electronic cutting machine, and laminator—to prepare for success in the classroom. A recent ceremony was held to honor Dr. Burgess and commemorate the renewal of the John A. Burgess Curriculum Library after its recent move to a newly remodeled space in Jenks Library.

Pictured above: Drs. Nelson and Burgess in the John A. Burgess Curriculum Library