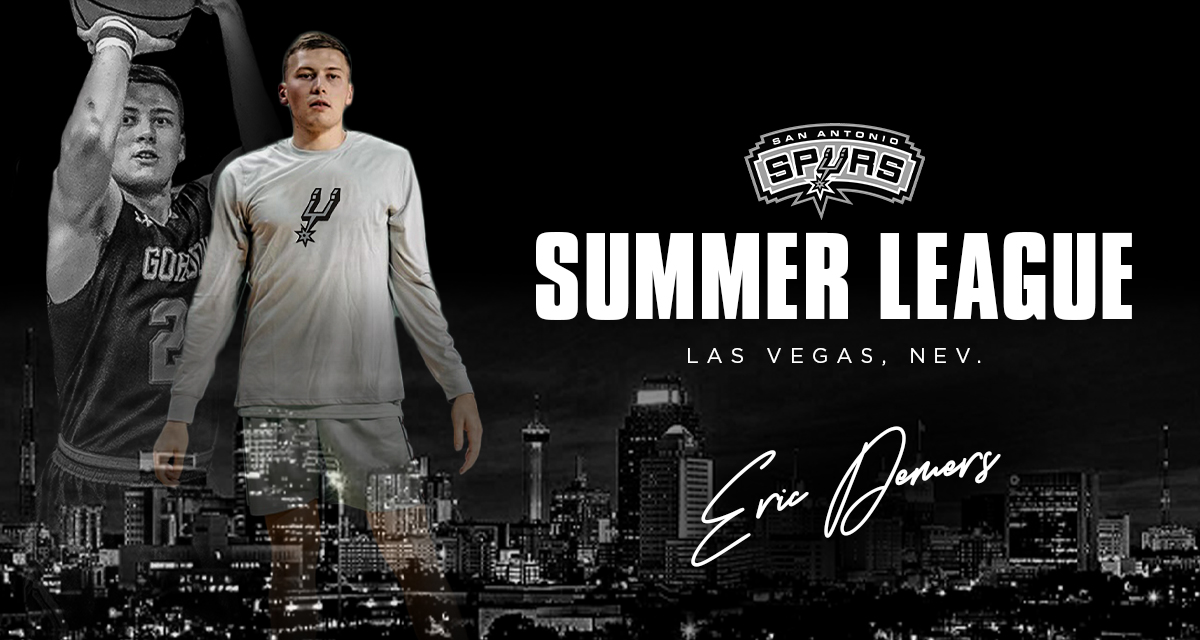 Demers is Only DIII Grad in NBA Summer League

Once dubbed a “D-III nobody” by Sports Illustrated, Gordon College Men’s Basketball alumnus Eric Demers ’20 is now the only NCAA Division III name on the San Antonio Spurs 2021 Summer League roster. More than one year since concluding his celebrated senior season with Gordon, Demers is two games into the NBA Summer League. Currently in Salt Lake City and next in Las Vegas, Demers will play in front of all 30 NBA organizations, as well as European scouts.

“I’m just definitely excited to get my professional career started with the Spurs,” says Demers.

Despite the pandemic’s interruption to the typical professional recruiting schedule, Demers continued to work on his game. Both in California and in the Boston area, he surrounded himself with as many professionals as possible, including NBA trainer Jordan Lawley and Boston Celtics’ players Marcus Smart and Jaylen Brown. During his training sessions on a trip to Los Angeles in early June, Demers caught the eye of a Spurs assistant coach.

“I got to work out in front of him three or four times and just continue to build that relationship,” says Demers. “It just felt like the Spurs were the were the best fit for me.”

“I am so proud of Eric and his invitation to participate with the Spurs at the NBA Summer League,” says Gordon Men’s Basketball Coach Tod Murphy. “I’m not surprised at all because Eric is the best example of how hard work pays off.” A former NBA athlete himself, Murphy especially credits Demers’ choice to devote his time off during the COVID-19 pandemic to training. He says, “I’m thankful that the Spurs are taking a chance on a DIII player from a small school like Gordon, because they see what Gordon has seen for the last several years, that he can flat out play.”

Under Murphy, Demers became the all-time leading scorer not only for Gordon College, but also the Commonwealth Coast Conference (CCC) with 2,553 points. During his historical senior campaign, the lights-out shooter led the nation in scoring, named the CCC Player of the Year and earned an All-American nod by the National Association of Basketball Coaches (NABC).

Even with his ambitious pursuits, Demers makes an equally determined effort to prioritize his expanding family—he and his wife, Lauren (Edwards) ’20, will soon become a family of three, expecting a baby boy in the next month. Juggling life and work is a familiar drill for Demers, who excelled as a student both on the court and as a double major in recreation, sport and wellness and business administration.

“To me and my family throughout this process, it’s definitely been a journey of highs and lows,” says Demers. “There were times where I had to get a little part-time job here or there just to pay certain bills as I continued to strive [toward] being a professional athlete. For me it was trying to go all in . . . I was just willing to stay at it and believe that this is what God wanted for me.”

Watch Demers play with the San Antonio Spurs through August 17 >

This article was originally published through Gordon Athletics.

← Tips for Returning to an In-person School Year
Anchored and Unbounded, Part 1: Gordon is More Affordable →