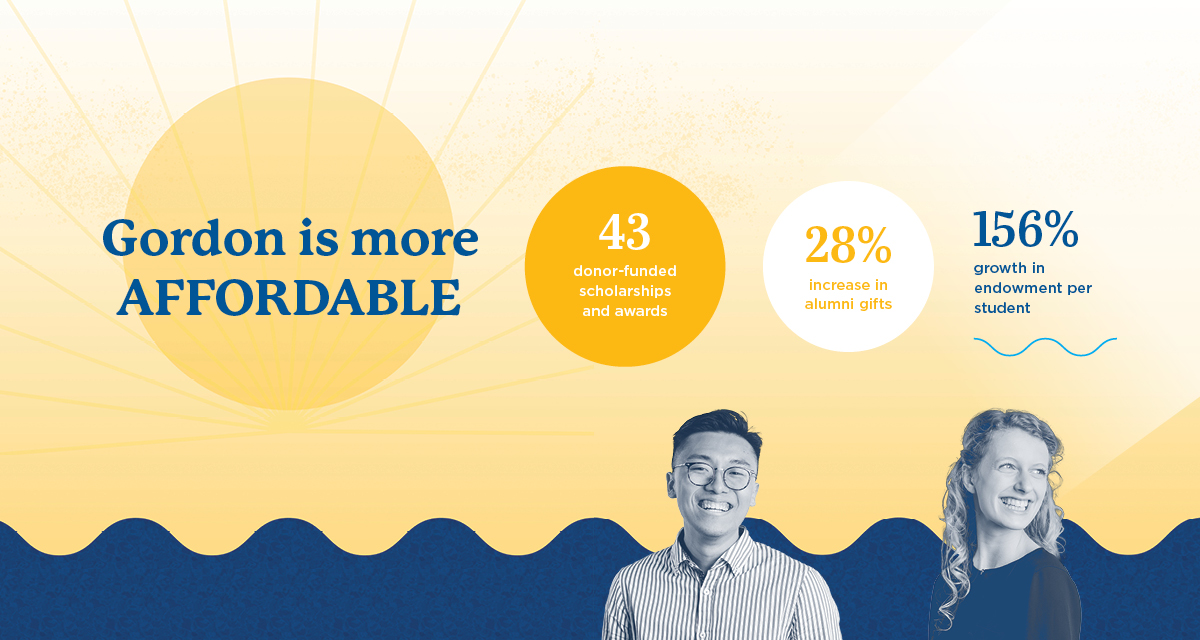 The fall 2021 issue of STILLPOINT, the magazine of Gordon College, spotlighted the completion of a wildly successful Faith Rising campaign. The Bell shares the highlights in a three-part series, “Anchored and Unbounded.” This is part one.

Gordon has been fortunate to be named in Washington Monthly’s “Best Bang for the Buck”; Money’s “The Best Colleges in America, Ranked by Value”; LendEDU’s “Best Colleges for Financial Aid”; and “Inexpensive Colleges and Universities” in Fiske Guide to Colleges. But accolades alone weren’t enough to close the ever-widening gap between household income and college costs. More had to be done. Born from a desire both to recruit and retain top Christian students and to graduate them without significant educational debt, affordability became a key driver for Faith Rising. Through the campaign, Gordon has dramatically decreased tuition costs to families and increased the volume of merit- and need-based scholarships for students.

As an admissions intern, Peter Lee ’22 loves connecting with prospective students, especially ones who may be intimidated by the cost of college. He knows the feeling. As the son of missionaries to India, “I can tell these students: I’ve been in your situation,” he says. “But Gordon has been really generous with resources.” For Lee, the prospect of attending a Christian college in the U.S. wouldn’t have been possible without scholarships. “It’s really God who brought me here,” says Lee, “through other people he placed in my life,” including those who have helped fund student scholarships. With financial assistance, Lee says, there’s “less of a burden for my parents and for me as well. I can concentrate and focus my time here at Gordon.”

Sustainable scholarships for students: The transformative power of endowments

Faith Rising is about affordability for students—and the College. Until now, the majority of scholarship funds came from Gordon’s annual budget. “Because the College has been unrelenting in its commitment to student scholarships—99 percent of students receive some form of financial assistance from Gordon—this had grown to be an astronomical budget line,” explains Campaign Director and Associate Vice President for Advancement Britt Carlson Eaton ’03. “The pinch was palpable.” Enter endowed scholarships. Funded by annual interest from the College’s endowment and earmarked specifically for students, these scholarships help offset the cost of college without tapping into Gordon’s annual budget. The Faith Rising campaign has added more than 20 new endowed scholarships. “Gifts to the endowment—for scholarships, faculty chair positions and other allocations—transform Gordon’s trajectory and secure its financial viability for the future,” says Eaton.

When Catherine Corbin ’22 became a Christian in high school, she knew her world was about to change. “It was pretty significant for me, not only to claim that I was a Christian but then to go to a Christian college,” she says. “I literally would not be at Gordon if it were not for the generosity of donors and the patience of Gordon staff in working with me and treating me with dignity even though I felt so weak and felt so dependent. They really showed me what it is to be in Christian community.” For Corbin, scholarships are “not only funding my academic experience but also funding me finding out what it means to be a Christian, to be a woman of faith.”

Rolling back to leap forward: A 33% tuition reduction beginning in the fall of 2021

On October 8, 1970, when Gordon formally established itself as a national Christian liberal arts college (after the Divinity School spun off to merge with Conwell Theological Seminary), the cost to attend was one-third the median family income at the time. After five decades of hyperinflation in college tuition, the average American now must earn tens of thousands of dollars more than the current median income. To close the unsustainable gap, on October 8, 2020—50 years full circle—Gordon announced a 33 percent rollback of annual tuition, the “Gordon Game Change,” to less than one-third of the 2019 median family income.

A home for honors: The Global Honors Institute

The College’s first fully endowed scholarship, Global Honors Scholars, launched in 2018 as the flagship four-year honors program. Thirty-three students in this cohort-based program have experienced one-on-one mentorships; specialized seminars on the relationship between education, culture and character; face-time with scholars like N. T. Wright, Dr. Ivan Satyavrata and Dr. Praveen Sethupathy; and cross-cultural worship, travel and internships. The Global Honors Scholars program is housed under the Global Honors Institute along with the Clarendon Scholars honors program and seven other distinguished opportunities.