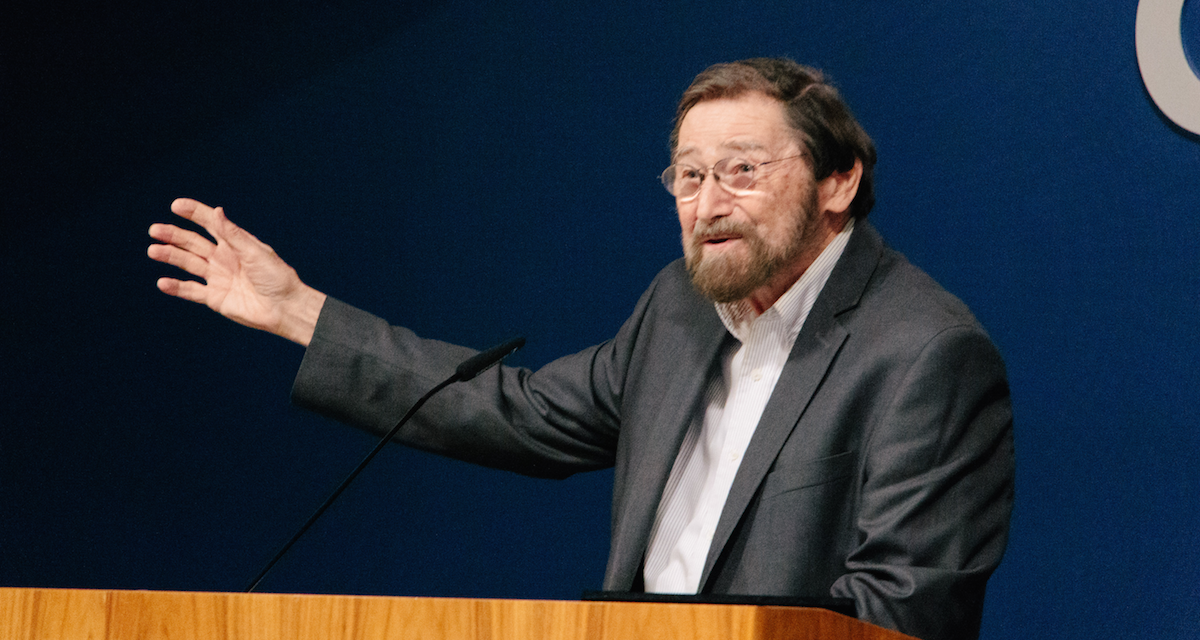 Alumni, parents and students who braved the rain and made their way to Gregory Auditorium during Homecoming Weekend were treated to an hour of wisdom from esteemed Biblical Studies Professor Dr. Marv Wilson on the subject of “Jewish Influences on Early Christian Belief and Practice.”

“This may hopefully get you thinking in a somewhat different direction, reminding you the religion of Jesus and the 12 was Second Temple Judaism, not Christianity—that Jesus launched his hometown ministry in a synagogue in Nazareth, not in the First Baptist Church of Dallas,” Dr. Wilson playfully began.

Noting that Christians may skip to the New Testament for helpful scripture, Dr. Wilson reminded his audience that the concepts behind the Greek words are Jewish in nature. Not only are Jewish ideas at the heart of this Jewish book, we share 80 percent of the Bible with Jews, Wilson said, citing theologian Karl Bart. The biblical studies professor has embraced this shared history, having led more than 400 field trips for Gordon students into Jewish places of worship.

In his talk, Dr. Wilson stressed that God’s revelation is present throughout the entirety of the Bible, and that a number of concepts taken for granted in the postmodern Christian Church have Jewish roots. For example, the democratization of the Word of God came about through Judaism because the Torah was read to a congregation, then paraphrased and explained through a sermon, a practice that lives on today in our churches.

As the Jewish people reinvented themselves following Babylonian captivity, Dr. Wilson explained, they came together to create the form of Judaism that the Early Church would go on to replicate. Their three core statutes—worship, biblical literacy and service—are familiar to Christians today.

Despite it being a foundational Christian belief, Dr. Wilson reminded his audience that we did not invent the resurrection of the dead. Isaiah 40:24–27 teaches that the dead will rise and God will wipe away all tears; Daniel 12 says, “there will be a resurrection unto life.” Art Department Chair Bruce Herman was mentioned for his artistic depiction of Isaiah 37, the Valley of Dry Bones. These bones, Dr. Wilson said, come to life “which speaks of a revival, a restoration of human life.”

The Bible’s shared history, Dr. Wilson advocated, is active and relevant today. “Biblical and theological studies are the heart of the foundation of a Gordon education,” he said. “You have to understand the Great Book—capital G, B—Great Book before you understand other books. Because you won’t understand Shakespeare that alludes to the Bible 550 times, or other ancient sources, until you really know sacred Scripture. That was at the heart of a classical education.”

Sagely guiding the audience through their Jewish roots as Christians, Dr. Wilson pointed toward a “glorious climax” we all have to look forward to, that is when the teachings of the Hebrew Bible come to fruition and God returns. The legendary professor’s Homecoming lecture assured attendees that during a tumultuous time in the world, there is a deeper meaning to the vast history unfolding now.