“What’s the definition of an SAT word? A word you’ve never heard of before and will never hear of again,” joked David Coleman, president and CEO of the College Board.

(Yes, the College Board administers the SAT. And yes, their CEO just poked fun at it.)

With self-deprecating humor and incomparable articulation, Coleman shared the wisdom behind the College Board’s recent overhaul of the SAT. Until now, he said, the SAT has encouraged “superficial familiarity” with topics—like the infamously obscure SAT words. “It’s the opposite of thoughtful learning,” explained Coleman. “It should never be true that you’ve only studied something because it’s on the SAT.”

The new SAT will “focus in depth on what matters most,” Coleman told President Michael Lindsay this week in a Conversation with the President event during the NEXT Summit, a conference for secondary school leaders held at Gordon. 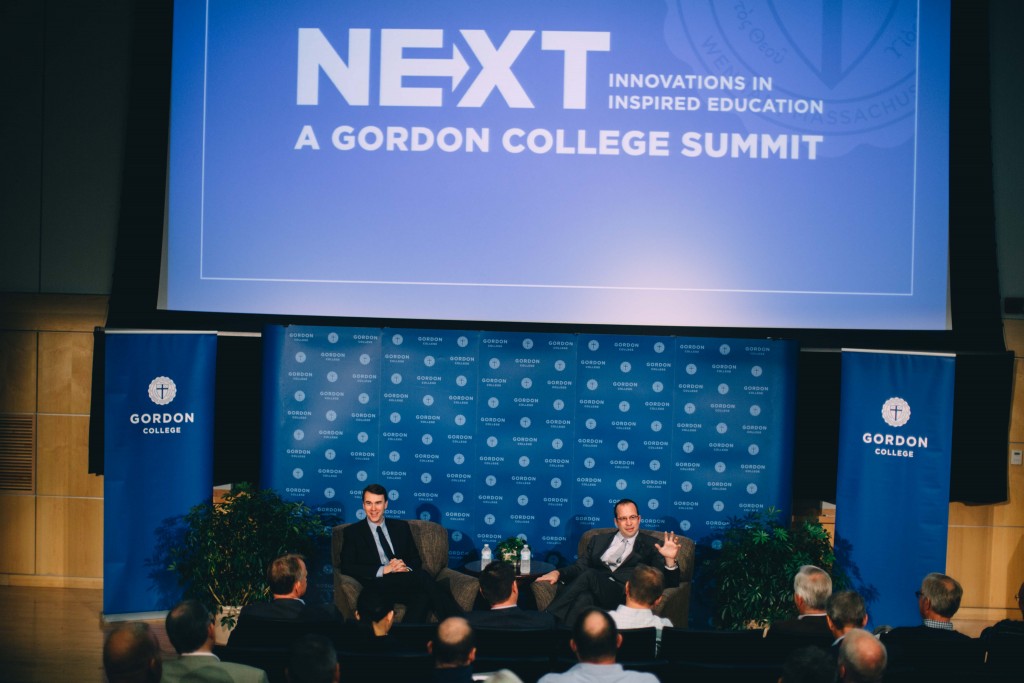 Students can expect two sections in the new exam, which will be implemented in the spring of 2016. The evidence-based reading and writing will test vocabulary in different contexts and challenge students to build arguments based on source material such as the founding documents of the U.S. The math section focuses on solving real-world problems, interpreting data and analyzing equations.

But the test updates go beyond new questions. Coleman explained that the College Board has partnered with Khan Academy to offer free (yes, free!) test preparation for every student. In fact, they’ve seen more than 300,000 sign-ups and more than 4 million problems completed for the new SAT prep. In addition, the College Board is helping students cover the cost of applying to college by offering four application fee waivers for each test-taker.

Coleman’s inspiration? For starters, his mother was a legend in higher education. As president of Bennington College for 26 years, Elizabeth Coleman instilled in her son a deep appreciation for all that education could achieve. “She was always more interested in the power of an idea—the intensity of an education experience—than any other priority,” he says.

The other was a high school psychology teacher named Mrs. Grist. “You walked into her room and suddenly you were part of a community of ideas,” he says. “She created an environment where people accelerated.” Under her tutelage, Coleman remembers, students read denser material, tackled bigger assignments, thought harder—and learned.

It was that “disproportional focus,” as he calls it, on the things that would stick with students for the long haul that ultimately drew him to the College Board—things like thinking critically, reading analytically and writing clearly. “What if entrance exams dared to focus on those few things that really mattered?” he questioned.

So, as the ninth president of the College Board, Coleman boldly set out to find out.

The three-year ride has, thus far, had its fair share of bumps in the road. Shortly after Coleman stepped onto the job, the College Board weathered intense criticism over its revised AP History framework. Recognizing its weaknesses, Coleman faced a peculiar challenge: “What is it to lead when you’re not entirely proud of something that’s under your name?” In the end, the College Board rewrote the framework completely. Coleman notes, “Leadership sometimes comes down to sentences”—a statement that rings especially true in his line of work.

Coleman, who was named in TIME magazine as one of the top 100 most influential people in the world, is a strong proponent of religious education. He wrote his first op-ed as College Board president in defense of religious institutions.

“Every parent I talk to is deeply interested in the ethical and intellectual growth of their child,” says Coleman. “This is an area where faith based educators have a lot to share with the rest of the country.” So, he challenged Gordon and the NEXT educators in the room to “lean forward in the work you do so well,” to press onward in the work that matters for the long haul—helping students to think critically, read analytically and write thoughtfully.

← Synergy: Jim Zingarelli’s Paintings at Berklee
What the Wilderness Taught Me →
Loading Comments...