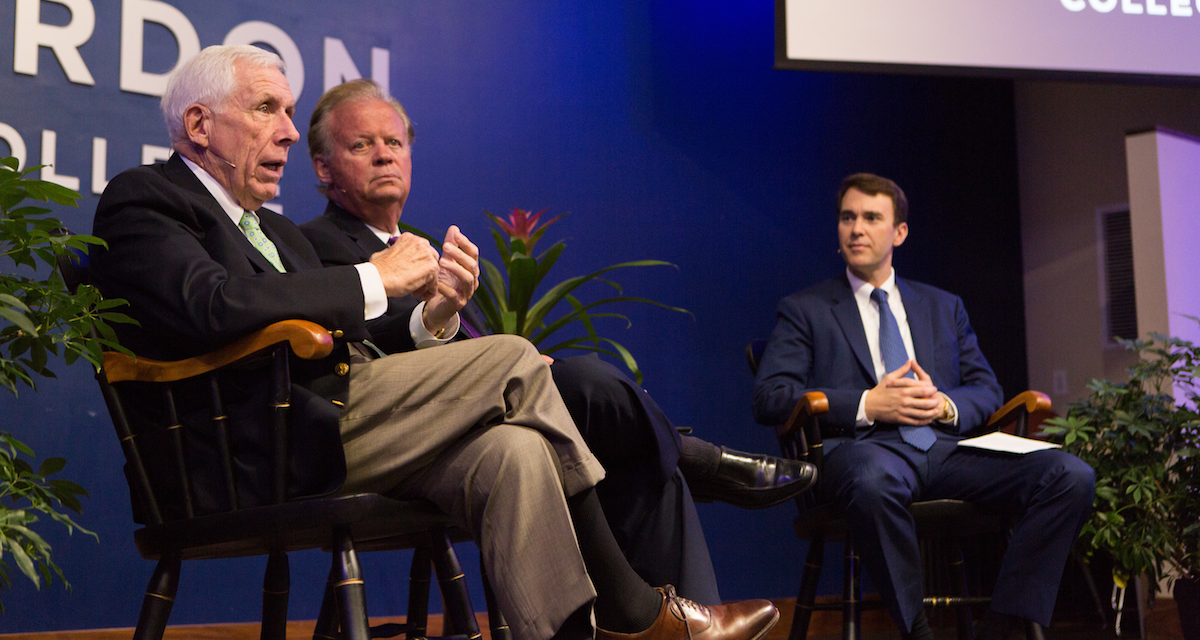 Faith Across the Political Aisle

Posted on October 9, 2017 by collegecomm

In our current political climate, disputes between Republican and Democratic parties seem to grow increasingly public and volatile, propagating an “us-versus-them” mentality. But perhaps there’s more to the story. To investigate, President Michael Lindsay invited two politicians—one a Republican, one a Democrat—to talk about this very issue on a personal level. Former Congressman Frank Wolf (R-VA), pictured left, and former Congressman and UN Ambassador Tony Hall (D-OH), pictured center, discussed their own struggles and victories with navigating politics as people of faith at a recent “Conversations with the President” event.

Wolf shared that, for him, faith informed a fierce conviction to protect and reinforce religious freedoms in both the United States and in third-world countries. He traveled the world extensively to advocate against religious persecution in Sudan and Iran, and has held many conferences within his district to address the importance of human rights in places around the world.

As a Christian Republican, Wolf often found that his motions to send support to those facing religious persecution would either stall due to disinterest and inaction or be shut down. “You are going to face pressure. It might be subtle at first . . . but you will have trouble,” he said. Faith in God, he continued, empowered him to fight for what he felt to be right, even as he struggled to find support from his constituents.

For Hall, who came to faith later in his life, his journey was equally challenging. As a Christian, Hall felt a particular calling to help those living in poverty, but when the Select Committee on Hunger—for which Hall was acting chairman—was abolished, Hall found the goals he had been working toward seemingly disappeared. It wasn’t until Hall encountered Isaiah 58 and its message about the power of fasting that he found a new approach to alleviating hunger. To raise awareness for world hunger, Hall began a 22-day hunger strike. Although a public fast was unheard of in the political world, the feedback was overwhelmingly positive and the hunger strike campaign raised over $100 million for families living in poverty.

“You’re taught not to associate with people on the other side,” Hall said—but these two men have nonetheless developed a friendship over their years in politics. It started at a prayer breakfast in Washington, D.C.,  and has continued for over 25 years.

“When you pray with one another, break bread with one another . . . a lot of things can come out of those friendships,” Wolf said. “I don’t think you have to compromise . . . follow what the gospel says,” and the rest, both men agreed, is ultimately just the details.