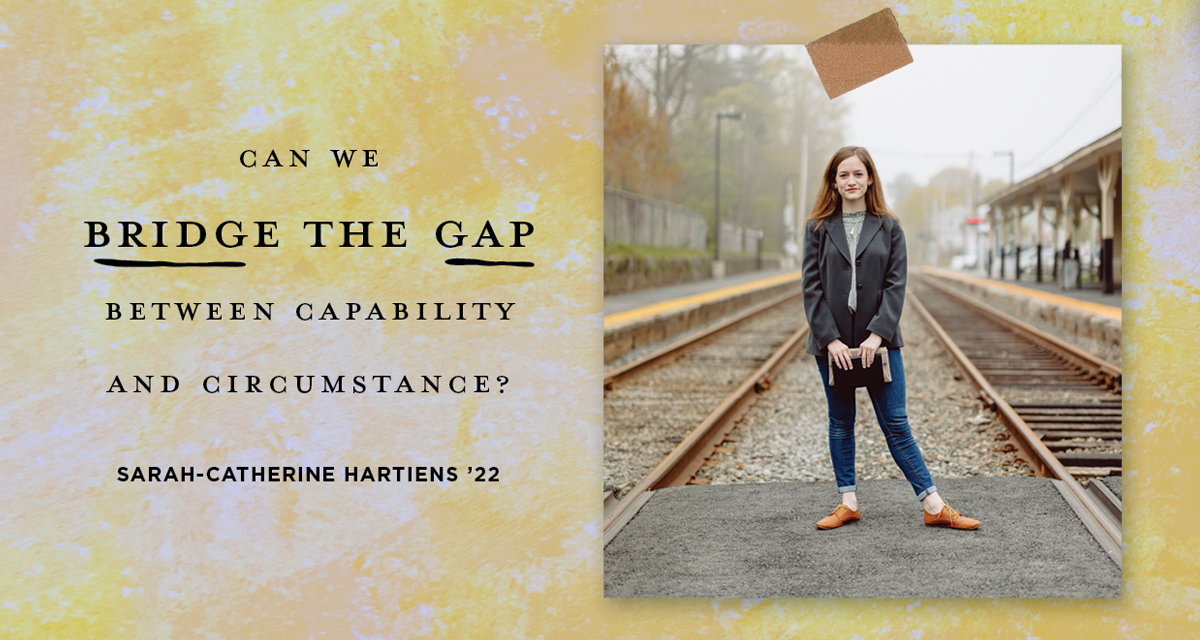 Finding the Line Between Right and Privilege

It’s a memorable scene: Charlie Bucket eagerly unwraps his chocolate bar and discovers the prized golden ticket that will not only gain him entrance to Willy Wonka’s Chocolate Factory but eventual ownership of it.

In that moment his world opens; opportunity changes trajectory. But, Sarah-Catherine Hartiens ’22 (international affairs) notes, access is the precursor. So, when she left her 300-person hometown in rural Hedgesville, West Virginia, at age 16 to live in Savièse, Switzerland, for a year, receiving her first train ticket was a Charlie Bucket moment. “My whole mind was opened, and my dreams were unleashed,” she says. “When we are granted access to physically move, we are given the opportunities to expand our minds through meeting, watching, listening and interacting with others.”

As our physical access grows, so do our minds. But who is responsible for providing that access? Is transportation a right or a privilege? If the Universal Declaration of Human Rights affirms that “everyone has the right to freedom of movement,” why are the means of movement only available to the wealthy few? These are questions Hartiens, a Global Honors Scholar, explored about 4,000 miles south of her first train ticket—in a place that has no trains.

As an intern for the Whitaker Group in Accra, Ghana, following her junior year at Gordon, it was not uncommon for Hartiens and her coworkers to spend four to eight hours sitting in traffic each day. “The population is just increasing at such a rapid pace, and people need to access the market,” she explains, “but without public infrastructure, a certain level of wealth is required to move.” To put this into context, pack the population of Chicago into the square mileage of Boston, and remove organized transportation systems.

During her internship, Hartiens assisted in market research and client cases, but she also conducted personal assessments of the standards of transportation systems in varying countries. Cultural values and expectations, geographic landscapes and even weather patterns all play a role. “It’s never that people are lacking skills or work ethic,” she observed. “What it comes down to is a gap between those capabilities and people’s circumstances.”

Predictions suggest that by 2050, Africa will account for a quarter of the world’s population, and by 2100, the world’s biggest cities will be in Africa. Hartiens wants to see economic growth accompany this population boom. The granddaughter of a former bishop of the Nigerian Anglican Church, Hartiens says, “As an American committed to the African continent, I want to contribute to its advancement.” She grew up with African influence and, in addition to Ghana, has spent time in Togo and the Democratic Republic of Congo, and lived with a Malian family for five months.

“Africa is a continent with thriving businesses and the world’s most-needed resources,” Hartiens says. “It has such a wide array of languages, topography, products, cultures and, not to mention, an ever-increasing population. In order to host this continuous growth, we must plan solutions now. It is in the world’s best interest that we invest in more defined pathways for goods and people to move around the continent. Without organized access, we will continue to only taste the tip of the iceberg of all that Africa has to offer.”