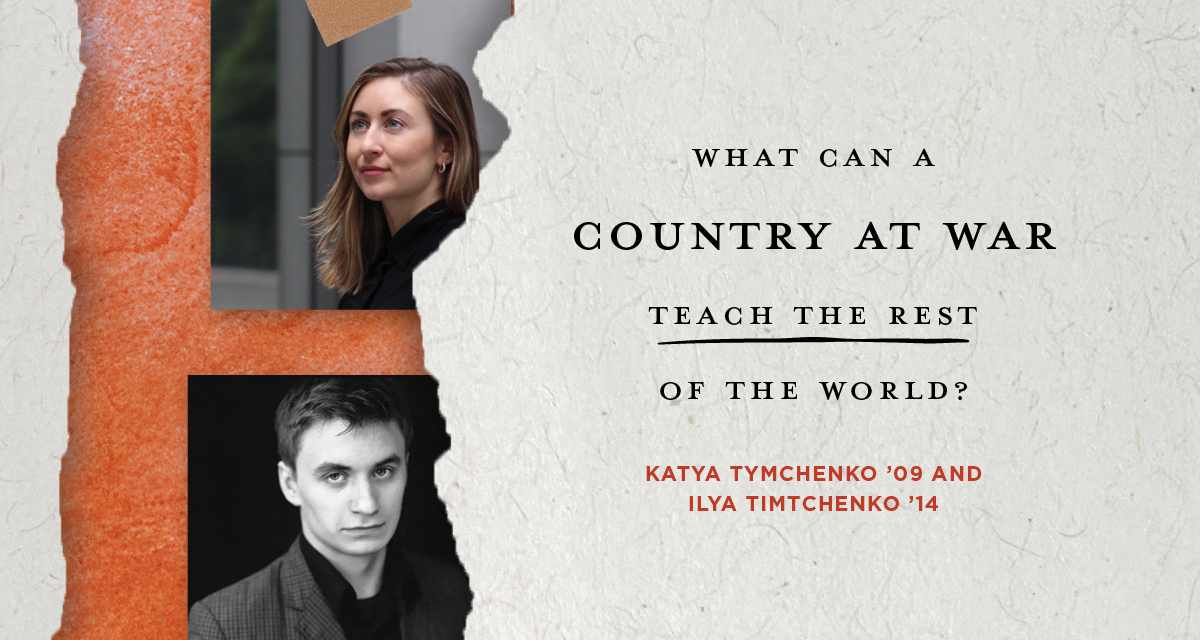 For centuries, the ethereal chants of the Ukrainian Orthodox Church have filled domed cathedrals, rural wooden churches and homes in secret. Throughout a tumultuous history—Mongol invasion, Church schism, revolutions, the Holodomor genocide, Soviet oppression, the Chornobyl disaster and Russia’s current full-fledged war against Ukraine—these songs of the “unfailing light” have voiced the persistent hope of a culture acquainted with hardship.

Thousands of miles away in Rochester, NY, and Boston, MA, respectively, Ukrainian-American siblings Katya Tymchenko ’09 (psychology) and Ilya Timtchenko ’14 (economics) hear the echoes of their family, friends and compatriots. Departing from their Kyiv family home after Christmas in 2021, Katya and Ilya packed extra suitcases, suspecting Ukraine was on the brink of a new phase of war with Russia. Within two months, in late February of 2022, their parents had to be displaced.

Watching the invasion unfold filled the siblings with fear and grief, yet they were also inspired to help Ukraine withstand the invader. They immediately began raising awareness and catalyzing action. The founder of a Ukrainian nonprofit that empowers women, Second Wind, Katya organized fundraisers, refugee housing and ESL opportunities. Ilya, a former reporter for Kyiv Post, authored op-eds for The Washington Post, the Harvard Kennedy School and the Atlantic Council. But their postures embody a broader approach.

“This is not just a Ukrainian thing, and it’s not even just a European thing,” says Katya. Explaining that Ukraine is the number one exporter of grain to Africa and Asia, and a prominent location for international companies to develop technology, she says, “It is a global problem.”

“People need to understand that when you have a war and on such a big scale, we see so many injustices on so many different levels,” says Ilya. “This is going to be going on for years.” Even beyond the post-traumatic stress, billions in funding to rebuild and complex foreign policy, he believes Europe’s largest refugee crisis since World War II will lead to a human justice crisis.

“In Eastern Europe, there has been a massive abuse of human trafficking by Russian organized crime. This includes children who are coming from orphanages, going straight into the arms of traffickers,” says Ilya, citing past reports of attempts to traffic orphaned Ukrainian infants. “If you look at how much more vulnerability there is now, you can just imagine how repercussions are going to be going on for years.”

As the siblings survey the multilayered effects of war, Ilya especially advocates for policymakers to learn more about the history and culture of Eastern European countries. Earning his Master of Public Policy at the Harvard Kennedy School, he considers how policymakers view the world: “Either we give too much attention to those who seem to be the most powerful or we understand that each country has its own identity and right to sovereignty to make its own decisions through a democratic process,” he says. “We must be curious ahead of time, instead of being reactive only when a crisis comes.”

Months after receiving her STEM MBA from the University of Rochester, Katya examines how the world consumes information. “People have become accustomed to treating tragic events—even wars—as media stories: if it’s not in front of them, they forget about it,” she says. “Although it’s difficult to keep track of every story and even turn our eyes away from them because ‘it’s too hard to handle,’ it is our human and Christian duty to stay engaged and help wherever and however we can.”

Halfway across the world, Katya and Ilya think of their mother cooking and cleaning for refugees and of their continuing to help Ukrainians—the image evoking the enduring Ukrainian “unfailing light.”

“It’s hard having to pick up your life and be resilient,” says Katya. “I’m happy—if I can use the word happy in this situation—to see that the world is at least getting a little bit closer through a war. Ukrainians can go through anything, but this will change us.”