Music performance major Emily Bartz ’17, from Sidney Center, NY, was one of 24 students from across the nation selected to perform in the highly competitive Collegiate Flute Choir this summer.

The performance was part of the 43rd Annual National Flute Association (NFA) Convention, which took place August 13 through 16 in Washington, D.C., bringing together the country’s leading flutists, flute makers and flute companies to network, perform and teach. The Collegiate Flute Choir was one of the convention’s several flute ensembles, representing musicians from varying age levels and musical areas who were selected through a competitive audition process. 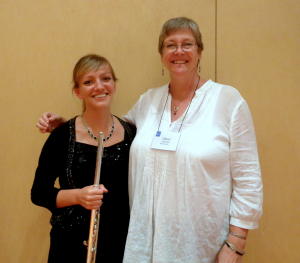 The audition involved learning and recording a piece of music selected by the NFA. “Emily undertook the preparation of the contest repertoire on top of her already-full musical plate and spring semester course load,” says her mentor and Gordon College flute instructor, Dr. Eileen Yarrison. “Her work ethic is extraordinary.” And it paid off, as Emily’s submission clearly stood out from others in the deep pool of applicants.

Emily credits Dr. Yarrison with helping her realize her musical potential. “She supports me, encourages me, attends my performances, answers my never-ending supply of questions, and creates opportunities for me,” Emily says. “If it were not for all she has taught me about the flute, musicianship and life in general, I would not be the musician I am today, and I definitely would not have been an NFA CFC member this summer.”

At the convention Emily rubbed shoulders with the likes of James Galway and other world-famous flutists associated with the NFA—the largest flute organization in the world, with 5,000 members from more than 50 countries. “Participating in an NFA competition is an excellent way for a flutist to gain national visibility, to meet one’s peers and heroes, and to experience the competitive audition process which a professional flutist must repeat many times during his or her career,” says Dr. Yarrison. “It is an exceptional achievement that Emily won an NFA competition on her first try. I’m very proud of her.” 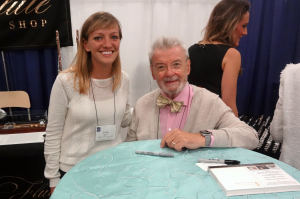 You can hear Emily perform as a member of the Gordon Symphony Orchestra on Sunday, November 1 at 3 p.m. in the A. J. Gordon Memorial Chapel. View all upcoming music events >>

Listen to a sampling of Emily’s flute performances >>