One Student’s Summer: A World of Opportunity

Toussaint Williams ’18 is a double major in international affairs and communication arts, a Clarendon Scholar, and a leader of the Gordon Swing Dance Club (he offers this shameless plug: “Everyone should join.”). This summer, Toussaint jetted from his Connecticut home to complete a competitive two-month internship in China and a two-week mission trip to his native country of Jamaica. He shares his experiences with The Bell.

I woke up in a panic one Saturday morning in May, three weeks before the end of my first year. I started to think about my lack of plans for the summer. Of course, I could go back home and wait tables, or do some gardening for the elderly woman I had helped the previous summer. But none of that seemed to fit. All I could think was, “Toussaint. You have the whole world in front of you and so many opportunities ready to be taken.” So, I threw on my Gordon College cap (the one I bought on my first visit to the College last summer) and took a walk to Career Services. 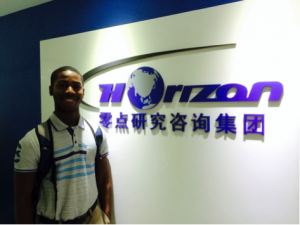 I asked for help finding a summer internship, and was put in touch with Pam Lazarakis, Director of Career Services. She interviewed me to scope out my interests. I’m an international affairs and communication arts double major with a background in Mandarin and a strong desire to travel. Pam took all of this into account, helped me craft a résumé and cover letter, and even helped me find housing for the summer. With her help, I landed an internship with Horizon Research Consultancy Group’s Institute of Global Development Power, a market-research company in Beijing.

As a research assistant at Horizon, my responsibilities this summer included small-scale research projects for new clients, editing and revising reports, designing PowerPoint presentations for weekly staff meetings, and transcribing recorded interviews. Most exciting of all was accompanying consultants to interviews with upper-level officials of big companies such as Boehringer Ingelheim, Bayer and Virbac, and new companies looking to expand in China. I even had the opportunity to lead some interviews. 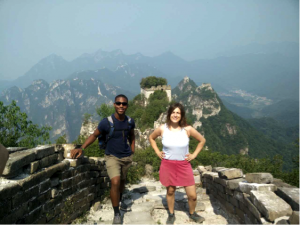 During my two months working in Beijing this July and August, I lived in my own apartment in Andingmen, in the center of the city. I tried to have an “authentic” Beijing experience—but the first thing I did was visit all of the touristy parts of the Beijing. Who would turn down a chance to see Tiananmen Square, the National Museum, Mao Zedong’s enshrined body, and other tokens of Chinese history and nationalism? But after that, I managed to find an amazing group of people—journalists, consultants, Ph.D. students, U.N. workers, lawyers and doctors all from different parts of the world. With them I went to the Great Wall, traveled to historic villages, and had challenging discussions ranging from social movements in China to politics in France, and even discussions of American life and culture. I am very surprised by the seeds of long-lasting friendships I made in my short time abroad.

Months before that crazy move, as I walked into Jenks Library—five minutes late for my 9:45 a.m. class—I was stopped by an exuberant student leader of an upcoming short-term service trip to Kingston, Jamaica. She asked me to join her team of students in their work at the Caribbean Christian Center for the Deaf (CCCD). At first, I wanted to say no. Raising money for the trip sounded intimidating, and I felt there was more I could be doing with my summer. But I started to feel a pull so strong that saying no became a lot harder. With support from my family and friends, and additional support and reassurance from chaplain Tom Haugen, my advisor Paulea Mooney-McCoy and members of my Clarendon Scholars cohort, I decided to go for it. 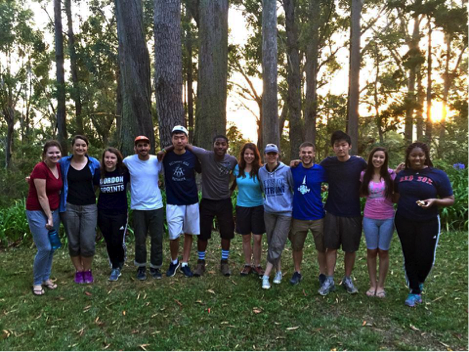 The trip was incredible. Our team of 12 (two student leaders, nine other students and a faculty advisor) spent two weeks in May repainting the CCCD playgrounds, sanding the walls of a new dormitory, cleaning out gutters, and helping with other projects. With the kids, who ranged in age from 5 to 21, we ran relays and played soccer, cards and even “Simon Says.” Some of my best memories are of the Wednesday chapel services, during which the head housemother (who serves as a mentor to the kids) would deliver a lesson. While we were there, she spoke of God’s faithfulness and his “work behind the scenes.” She told her personal story—how she was deaf, but was healed when she entered a relationship with God through prayer and reading the Bible. Her faithfulness and her reminder that God is constantly working things out for our good, regardless of how hopeless our situations may be, was encouraging and reassuring.

I initially stepped onto the campus of this CCCD boarding school with many assumptions about the students and the work we’d be doing. I was proven wrong every single day of my trip to Jamaica. The kids were so bright, I learned more from them than they learned from me. I had nothing but my helping hands to offer, but these kids offered me encouragement, motivation, humility and a new perspective on life.

As an added bonus, several of my family members came to visit while I was on the island. They shared authentic Jamaican food, snacks and fruits with our team. It was amazing to reconnect with people who I hadn’t seen in eight or ten years since coming to the United States.

If I could sum up a lesson I learned from my time abroad this summer, I’d base it on a quote from the short story “How to Tell a True War Story” by Tim O’Brien:

Often in a true war story there is not even a point, or else the point doesn’t hit you until twenty years later, in your sleep, and you wake up and shake your wife and start telling the story to her, except when you get to the end you’ve forgotten the point again.

In this short story the author taught me the biggest lesson thus far on my college journey. Let’s say the “war” that O’Brien mentions is a symbol of all the obstacles you have to overcome to get where you want in life. In these wars you have conflict, feelings of loneliness and anger, loss of hope and exhaustion—mentally, emotionally and spiritually. During these small wars, we don’t always understand the point; in the heat of these moments, we tend to see only obstacles and inconveniences. 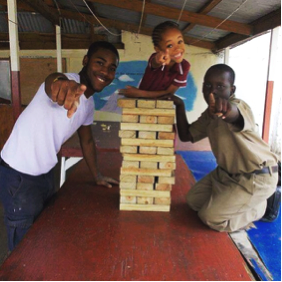 My experiences in Jamaica and China revealed the lessons behind so many past wars, and introduced me to new wars that will inevitably bring me growth and revelations. Not everything is clear, but I’m walking away from such different global experiences this summer with a better understanding of the ever-changing world I live in—a knowledge I can carry into similar experiences in the future.

It’s a bold statement, but I feel like a structuring and healing hand has reached into my life and put fallen pieces back where they belong, stitched up all the tears I left the States with, and set the foundation for remarkable growth and moves in the right direction. One night I remember meditating on all that I worried about before going overseas. I thought about all the people in my life that have constantly reminded me of my gifts, talents and potential. Although I doubted those encouragements sometimes, I realize those things were carrying me through. They were like tools for innovation, to bring me to the next level once I came to terms with the small wars I’ve had to endure.

I’d encourage every single one of my peers to jump on the opportunity to step outside of their familiar situation. Look for those opportunities, and be intentional about finding them. Don’t let your own wars be a cloud that tells you you’re not capable or ready for an unknown environment.