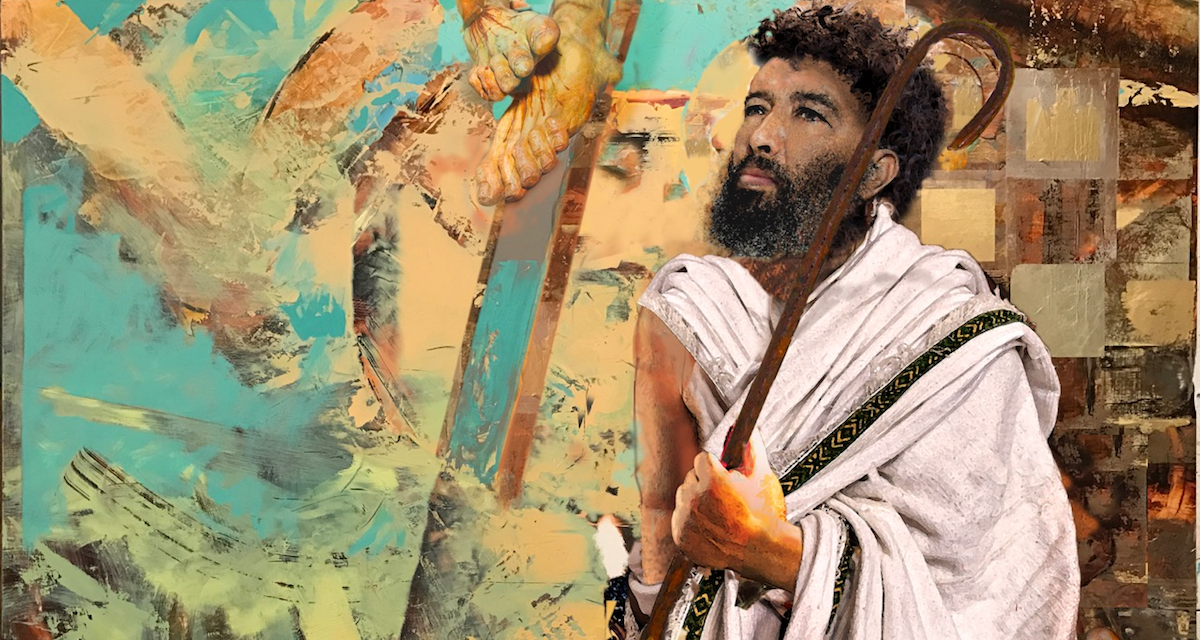 Professor Bruce Herman takes his in-progress painting of Saint Augustine of Hippo down from the studio wall, lays it carefully on the floor and drills nails higher up the wall before placing it again. Now the lower half of the large panel is more accessible for his assistant, art major Rachel Pacitti ’19, as she begins painting the drapery of Augustine’s clothing.

The oil painting, AUGUSTINE, Ordinary Saint (concept pictured above), was commissioned by the trustees of Westmont College for Westmont’s president, Gayle Beebe, an Augustine scholar, to commemorate his 10 years of service there. The work depicts Augustine as a young man before an abstract background in which the base of the cross appears amidst a glow of gold, silver and platinum leaf. 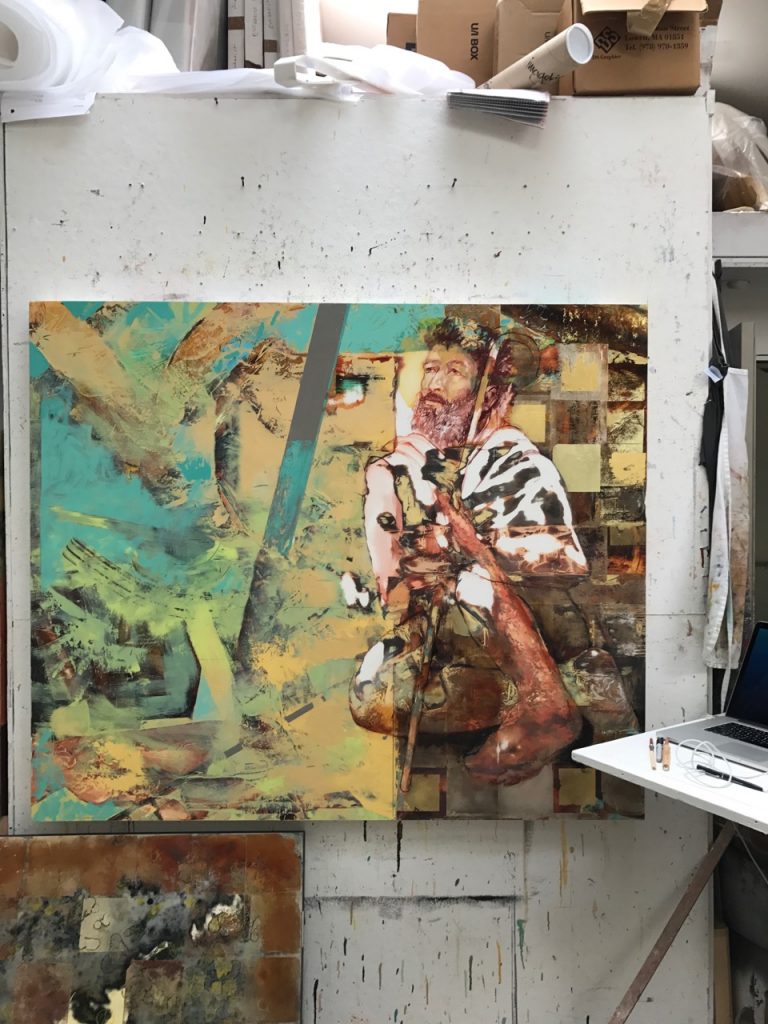 The canvas “is actually cut out of a much larger painting—it took up the whole wall,” says Herman. While he was painting Riven Tree, a commission for Duke University, the commissioner had a change of plans and wanted a smaller painting. Herman cut the work into several smaller panels, and one of them has become the start of this project.

Both he and Pacitti have read from Augustine’s writings to inform their work; however, Herman says, “I don’t read a text and then make an image that illustrates it.” Instead, reading provides the “raw material to evoke something of Augustine’s character,” he says.

“Augustine was an intensely creative person, and much of Christian theology has been shaped by his very original thinking with biblical texts and the life of prayer and contemplation,” Herman says. When he began planning the painting, “it’s fairly rare that this happens, but I immediately had a vision in my mind of Augustine at the foot of the cross kneeling, or repenting.”

The portrayal of Augustine as a young penitent, rather than later in life as a venerable bishop, is unusual. Herman has worked closely with Beebe to ensure that his representation reflects Augustine as he might have looked, basing the depiction of Augustine’s face on a modified photograph of Beebe’s friend Abune Paulos, who was a patriarch the Ethiopian Orthodox Church from 1992 until his death in 2012.

“I like ultimately to have some relationship with the people I’m making the art for,” says Herman. “I really enjoy collaborative work, and I enjoy commissions for that reason.”

Pacitti’s apprenticeship for this painting stemmed from an independent study course. “I saw that she was obviously very talented, and self-directed and disciplined,” Herman says, and working on a commissioned piece is a further step for professional advancement.

It’s Pacitti’s first professional work, and she says she feels honored to work with Herman. “I’ve only just begun, and I’ve learned a lot just from watching how he approaches the work,” she says. “He has an attitude of complete joy and play in his work, but also it’s a very serious and thought-out process, so you can tell that everything that he puts into the paintings—the colors, the layers, the shapes—has purpose.”

In this painting, “I’m more willing to be more inventive, to be more playful with color, to let go of some rigid picture-making,” she says.

Herman is a strong supporter of the expanded possibilities that collaboration curates. “In the spring I’ll be teaching a collaborative mural-painting class,” he says, “and the students will be acting as artists more than as students.” Because art is best made, he says, “in conversation: artist to artist, artist to client, artist to culture.”