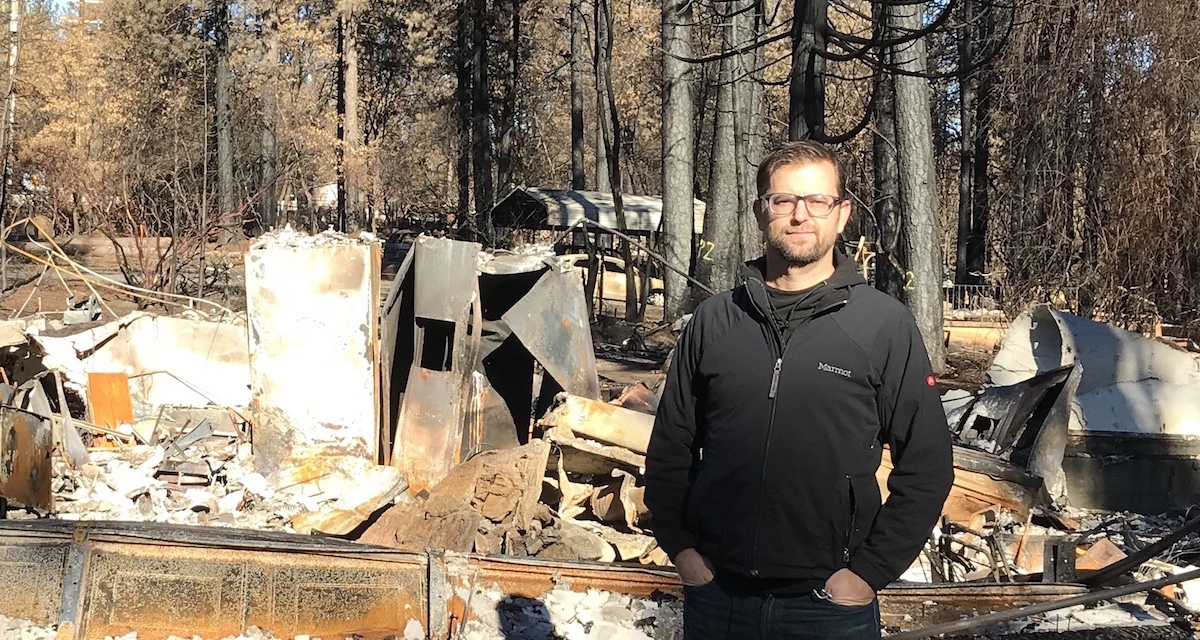 Good Samaritans in the Burn Zone

It was a normal Thursday morning and then it wasn’t. At 7 a.m., Katherine Sorich ’05 made breakfast for her two toddlers when it started raining. It took a moment for it to click—that the rain she was seeing through her kitchen window was actually ash and that the succession of booms she was hearing was the sound of her neighbors’ propane tanks exploding.

An hour later, and a mile and a half away, Elizabeth Abrams ’48 and her son, Phillip, received a phone call from a family member, informing them that Paradise, CA, was on fire—moments before a spark touched down in their neighbor’s yard and set the place ablaze.

At 8:30 a.m., three miles from where the Abrams had pulled out of their driveway, Kathy Machuga ’73 and her husband were just starting to notice a strange fog rolling in from the east.

By nine, Sorich, Abrams, Machuga and their families were in bumper-to-bumper traffic on one of the three roads out of Paradise, along with 26,000 other people trying to escape what is now known as the Camp Fire—California’s deadliest wildfire to date.

A sudden migration of 56,000 newly homeless

On November 8, a small spark reached the size of 80 football fields in under a minute, burning at a rate of one football field per second. Firefighters couldn’t stay ahead of it and civilians couldn’t outrun it. Before it was contained, two and a half weeks later, on November 25, it burned up 150,000 acres (about the size of Chicago) and 14,000 homes, and killed 85 people.

The community response was immediate. That first night, hundreds of people from Chico, the city next to Paradise, took in evacuees who had no belongings and nowhere to go. Jo Anne (Cooney) Cripe ’76 and her husband opened their home to seven evacuees and adopted, both relationally and financially, a young family that had lost their house and relatives.

“This kind of care is nothing unique. Within six hours, about 56,000 people lost their homes. They became sojourners overnight,” says Cripe. “People responded so quickly because they were our friends and neighbors. They were only 10 minutes away. It would be like Beverly or Salem for Gordon.”

Losing a home and finding a shepherd

A few weeks later, other Chico-area volunteers like Chad Fransen ’94 created reentry centers for evacuees who were returning to the burn zone for the first time to see what remained. They provided food, water, a working bathroom, a listening ear, and cleanup kits, which made it easier for evacuees to sift through the ashes for personal belongings.

Machuga was one of the evacuees to return home to an empty lot in her mountain town that now looked like “a war zone.” Then and today, the marks of the fire are still everywhere—in melted cars on the side of the road and piles of scorched and uprooted trees. The few things that still remain, rising up out of the warped metal and ash, are lonely brick fireplaces, bird baths, garden statues and filing cabinets. But the Machugas did recover something else.

“We found our nativity set,” says Machuga. “It was burned, but mostly unbroken. One shepherd lost his arm. It was a nativity set that my daughter and I painted when she was in junior high.”

Like the Machugas, Abrams lost her home. She still goes into Paradise every Sunday with her son and daughter-in-law. “Our church is still standing right in the middle of town,” says Elizabeth. “So, on Sunday, all of us who are evacuees go back to Paradise for church. We get to see all our old friends. That’s the happy part.”

A miracle house in an apocalyptic landscape

Now, the Sorich family is back in Paradise too, but not just on Sundays. Their home survived; they moved back in April, a month before welcoming another child. But, it’s not been an easy transition.

“Some people feel like we’re the lucky ones because we have our house, but it comes with its own set of issues,” says Sorich. “We are sort of feeling left behind, but you have to look at it like God spared us for a reason.”

In a town that’s 85 to 90 percent gone, it’s easy to feel left behind. Their friends have moved away and the people in their church have dispersed. They now have three small children—and nowhere for them to play outside. Just recently, they found out that the city water is contaminated with benzene.

The waiting game and unexpected companions

It’s been months since the fire, and people are still waiting—waiting for an apartment to open up in Chico, waiting to have their lots cleared, waiting for their insurance claims to go through, waiting to see if their water filtration systems are sufficient.

The American Red Cross and other disaster relief organizations have packed up and gone elsewhere—but the rebuilding has yet to begin. Many of those displaced by the fire are still at a loss for how to start over, but local churches and their Chico-area neighbors are showing up.

They’re clearing burned lots of toxic debris. They’re serving as intermediaries between Camp Fire evacuees, home insurance companies and the Federal Emergency Management Agency, so that evacuees don’t have to slog through the difficult, logistical process of following up on insurance claims or applying for disaster recovery assistance.

Local churches are even discussing the possibility of turning their Sunday school classrooms into bunkrooms so that out-of-town volunteers and mission groups have a place to stay while they’re helping.

While many of these efforts are in motion, the results remain to be seen by many. For Sorich, Abrams and Machuga, the waiting game has been a real test of faith, but also reason for seeking divine companionship—to do the waiting with God and others, instead of enduring it alone

“Life isn’t ever going to be the same again, but that doesn’t mean it can’t be good,” says Kathy.

“We all have hard choices to make. God doesn’t promise it will be easy; he just promises he’ll be there.”

“There’s people who want the church to be at the forefront of regrowth and see what God will do in that process,” says Katherine.

To read Katherine Sorich’s full story and to take part in what local churches are doing in Paradise and other communities that have been impacted by the Camp Fire, read “Complicated Miracles: Life in Paradise a Year after the Camp Fire”.