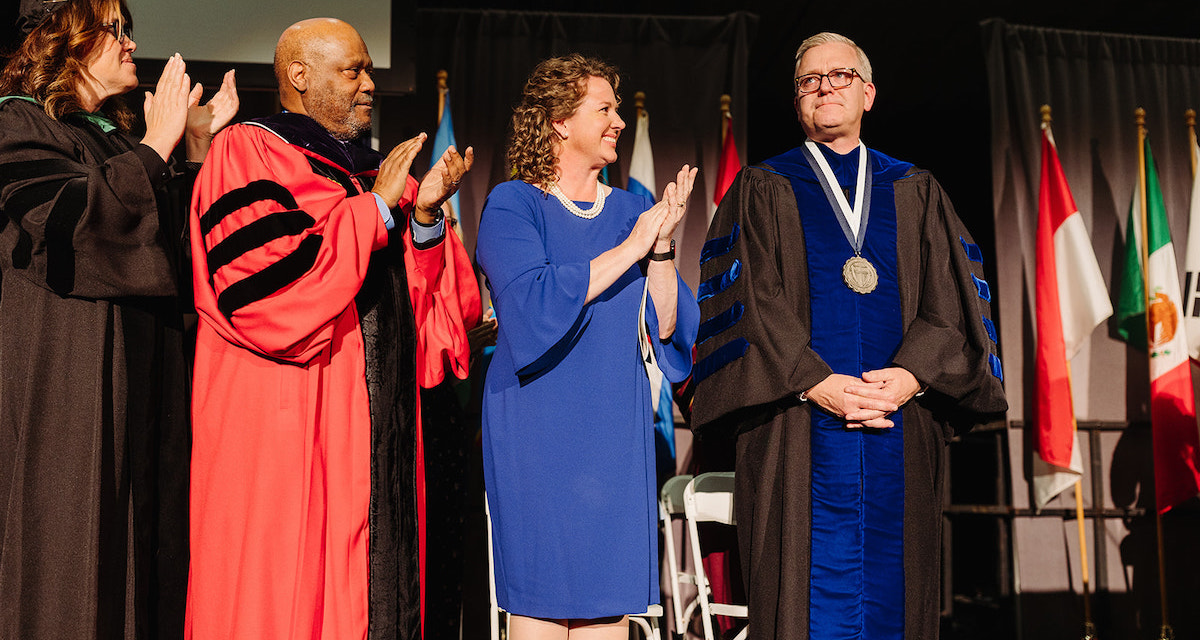 For only the ninth time in Gordon College’s more than 130 years of existence, a new president was formally installed on April 29. While Dr. Michael D. Hammond began his tenure as Gordon’s ninth president in July 2022, Friday’s events celebrated Hammond, honored the College legacy and established the importance maintaining a pathway forward with great hope.

Guests from partner schools and organizations joined Gordon leadership, faculty, staff, alumni, students and friends on campus at Hammond’s inauguration for a variety of events to mark the occasion.

Service of Worship and Installation

As the bold, rising verses of “Great is Thy Faithfulness” rang throughout the Bennett Center Gymnasium the morning of April 29, words from Lamentations prompted the Gordon College community to reflect on the inaugural theme: “Strength for today, bright hope for tomorrow.”

A variety of guest speakers presented prayer, Scripture, encouragement and commission, complemented by worshipful music from the Department of Music and “God’s Chosen” Gospel Choir. Three greetings were offered by representatives from partner institutions.

Former president of Houghton College and Consortium of Christian Colleges and Universities board immediate past chair Dr. Shirley Mullen set the tone for the celebration by emphasizing an over-arching theme present throughout the ceremony. She expressed a vision and hope for God’s work through a Christian liberal arts education and celebrating Gordon’s role in that legacy: “Our world is in desperate need of the kind of graduates that Gordon College has been preparing for generations—graduates who are grounded in a theological understanding of God’s creative and redemptive purposes, who are academically prepared to serve competently and effectively over the course of a lifetime.”

Gordon-Conwell Theological Seminary President Dr. Scott Sunquist gave a spur-of-the-moment address to Hammond’s children. Welcoming them to the neighborhood with Mr. Rodgers-esque friendliness, he said, “Your mom and dad have a very important place . . . in this time. To support Christian higher education is not an easy task. They’re going to need your help.”

In the first of two profound charges to Hammond, Kairos Partnerships President Rev. Dr. J.R. Briggs urged Hammond—his former professor—to remember three things: The day of his salvation, the day of his inauguration and his call as a Christian leader. “Remember the trust that this institution has placed in you,” he said. “I hope that you’ll respond to that trust with humility, faith and also competency.”

Hammond’s friend and mentor President Emeritus of Wake Forest University Dr. Nathan Hatch referred to writer john Edward Masefield’s vision of higher education as a “beacon of hope” amid bleak points in history. Recognizing data indicating heightened levels fear and stress across the world today amid the pandemic and war, Hatch said, “Your calling as an institution has never been more important and never been more necessary.”

A virtuosic violin performance of “The Kind of Love My Shepherd Is” by Adams Endowed Chair in Music Dr. Sarita Kwok transitioned the ceremony to investiture service. The audience gave standing ovations when Gordon’s Board of Trustees chair, The Honorable Herman Smith Jr., conferred Hammond as president and Board member Dr. Carrie Tibbles bestowed him with the presidential medal. The Board of Trustees and platform party laid hands on the Hammond family as Board of Trustees member Rev. Samuel A. Schreiner III offered up prayer.

The capstone of the service was Hammond’s inaugural address. In a posture the Gordon College community has come to know well, he put family first in an emotional salute of thanks to his wife, Jen, and children Elizabeth, Jack, Rebekah (who received rapturous applause when Hammond shared that she committed to attend Gordon in the fall), Natalie, Anne and Evelyn.

Hammond encouraged postures of serious Christian faith without dogmatism, service and leadership without selfishness and intellectual learning without arrogance. His assertion of Gordon’s identity inspired confidence in the College mission and recognized God’s faithfulness throughout difficult times, all to instill hope for the future.

“Gordon College has historically been defined as a place where earnest inquiry and academic pursuit have been unhindered by anxiety over the potential outcomes of those efforts. We fear no idea, no theory, no question, no scientific discovery because our confidence in God is sure,” he said. “Gordon College, the courage we must demonstrate has been there all along. It is strength drawn from the legacy of faith we have witnessed for over 13 decades. This is the courage to serve, to learn and pursue a deep and meaningful relationship with Jesus Christ from a position of humility and sincere obedience in response to the sacrificial love of the Savior.”

To conclude the service, Harold John Ockenga Professor of Biblical and Theological Studies Emeritus Dr. Marvin Wilson offered thanks to God in a benediction.

Later in the day, Hammond took part in a special inaugural Symposium with three other historians, including the Loring-Phillips Endowed Professor of History Dr. Jennifer Hevelone-Harper ’92, Dr. Nathan Hatch and Dr. Beth Schweiger. Together, the four panelists revisited a rhetorical question posed by Tertullian in the third century: “What does Jerusalem have to do with Athens, the Church with the Academy, the Christian with the heretic?” (It’s a question that students in Gordon’s great books honors program, the Jerusalem and Athens Forum, know all too well.)

Although Tertullian himself believed Christians (Jerusalem) should stay away from the Academy (Athens) because it seemed to increase the likelihood of heresy, these four panelists claimed that the relationship between the Church and the Academy is not only worthwhile but essential—if we are to equip today’s society with wisdom from the past.

Division runs counter to Jesus’s message. Schweiger explained, “As Christians, we have the freedom in Christ to examine everything. We are free to engage in whatever catches our interest or whatever we have questions about . . . We live in a time when there are a lot of walls erected in the Christian life in the United States . . . and one of the marvelous things about being a Christian intellectual is that those things don’t really exist in the life of the mind.”

Even though tension exists in American society between the Church and the Academy, Hammond that people aren’t necessarily asking Tertullian’s original question, but rather asking what the Academy has to do with the marketplace—or what Athens has to do with Wall Street. Conversations surrounding the primary purpose of a college education question whether the purpose is to educate the whole person, to prepare someone for a specialized job or both?

Hammond elaborated, “Tertullian presents this argument as an idealist. His hesitation is if we get too much into philosophy, it might harm our souls. And I don’t know that people are asking that question right now . . . We’re seeing such pressure to move away from those moments of deep reflection and thinking. People might be more apt to say, ‘We think Jerusalem has a lot to do with Wall Street. We should prepare for working in lucrative fields.’”

Higher education in 2022 is seeing an ongoing tug-of-war between intellectualism and pragmatism. While it might be tempting to follow in Tertullian’s footsteps and choose just one, the four panelists chose to embrace the tension and argued for a “both and” approach. “In my generation, if you had a liberal arts degree, there were plenty of jobs out there,” said Hatch. “Now it’s much harder. A college has to provide both. It’s not either or.” Schweiger added, “It will require us to be very flexible and very creative about how we are developing our curriculum and courses . . . but don’t we need people on Wall Street who are asking these questions? Don’t we need people in the space industry, running automobile companies, teaching 10th graders asking these questions?”