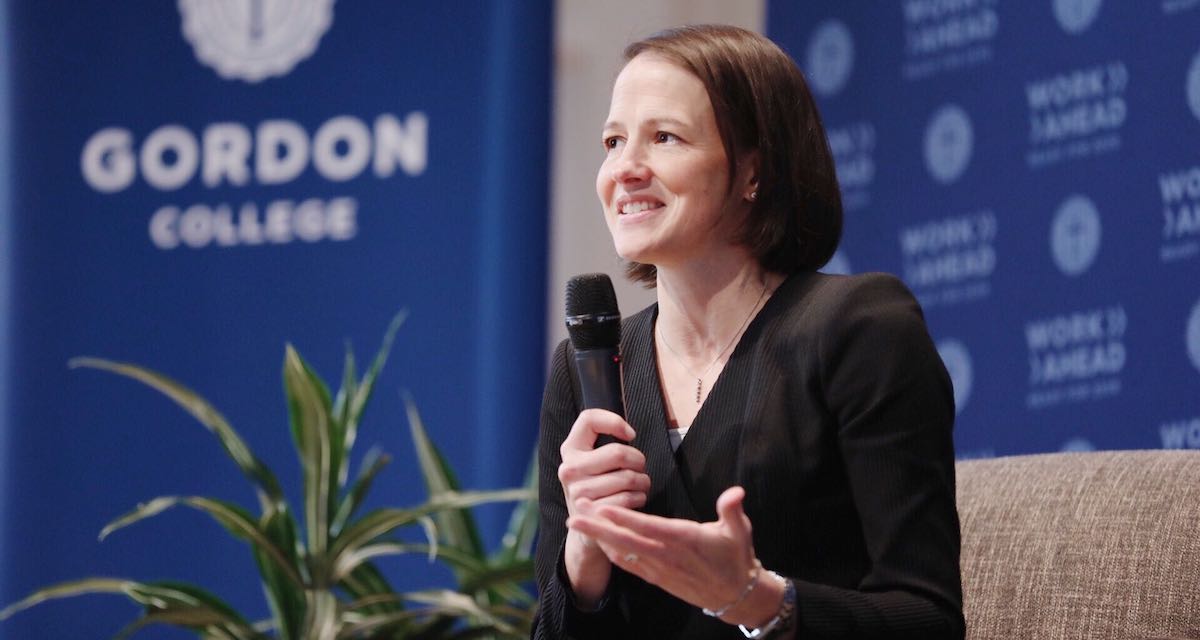 Heather Templeton Dill on the Future of Religion

Last April, the first picture of a black hole went viral. It was a low-res image of a bright yellow disc with a dark hole in the middle, similar in shape to a donut. Today, as part of the Work Ahead: Ready for 2030 initiative, the Gordon community got to hear from one of the people who helped fund this very photograph: Heather Templeton Dill. As president of the John Templeton Foundation, she oversees a large amount of money ($3.4 billion to be exact) and helps decide which research projects the Foundation will invest in. In her time at the Foundation, she’s awarded grants to fund academic research on topics ranging from the search for extraterrestrial life to gratitude.

Today, as part of a Conversation with the President, Dill provided background as to what a private foundation is, shared some of the research that the John Templeton Foundation has funded in regard to the future of religion, and gave advice for how Christians ought to respond to upcoming changes in the religious landscape.

Here are some highlights from her conversation with President Michael Lindsay.

D. Michael Lindsay: What do you do as the president of the John Templeton Foundation? Tell us about JTF.

Lindsay: And what do you give it away to?

Dill: Most of our funding goes to academic research. We invest in research that explores the deepest and most perplexing questions facing humankind. We have funded a great deal of demographic research, trying to understand what religious belief and practice looks like in the world today and where is it going. We have this great partnership with the Pew Charitable Trust. It’s called the Pew Templeton Global Religious Futures Project. For over 10 years, we’ve explored who is affiliated with what faith traditions around the world. The makeup of religious believers looks like it will be changing. Today the largest religious group in the world is Christians, but Pew research suggests that by the year 2060, the percentage of the global population that will be Christian will be equal to the percentage of the global population that will be Muslim. The good news is that religion overall will continue to grow.

Lindsey: How do we help people to see the value of what we’re doing here at Gordon? How do we communicate the value of a Christian education to outsiders, when we have a growing number of people who are skeptical?

Dill: The world needs people who have a strong moral fabric and a strong moral code. I don’t know of a better place to get that than from one’s religious traditions and beliefs. Having the opportunity to be educated in an environment that has high ethical and moral standards and has people come alongside you to help you navigate difficult situations—that’s the mark of a religious education, a Christian education.

Lindsay: How do you see the role of Christian schools or institutions like Gordon making a more significant contribution to their communities 10 years from now?

Dill: I’ve thought a lot about the changing religious fabric of the United States. According to Pew’s research, Christianity will continue to be the dominant faith in the United States, but there will be a smaller percentage of Christians. Pew says that now about 75 percent of the U.S. population identifies as Christian. They suggest that number will fall to two-thirds. That’s still the majority. But as Christian people, leaders and institutions, I think that it will become increasingly more important to develop friendships across faith traditions. Those friendships help us realize that we actually have a lot in common, particularly with the other monotheistic traditions, in the sense that we believe God exists—that’s a good starting point. We believe that we need to love God above all else, and we believe our call is to serve our neighbor better than we would serve ourselves. I think there is a unique opportunity for Christian institutions to go out and build those friendships.

The next Work Ahead event will take place tomorrow, October 1 from 11:30 a.m. to 12:30 p.m. in Gregory Auditorium where President Michael Lindsay will interview Pat Gelsinger, CEO of VMWare.