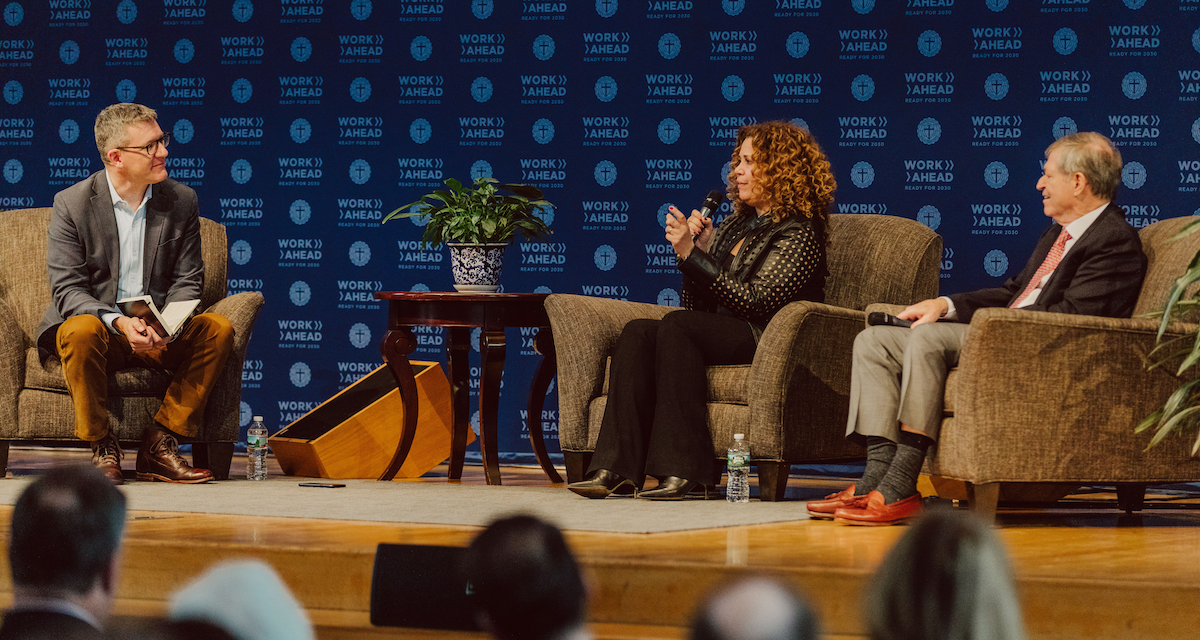 Hershey and Starbucks Executives on the Future of Work: Purpose and People Matter

This morning, executives from leading coffee and chocolate companies (“anything that you’ve given up for Lent, probably these two people are involved in producing,” joked moderator Andy Crouch, partner for theology and culture at Praxis) led a candid conversation about the future of work at a kickoff event for Gordon College’s new yearlong Work Ahead: Ready for 2030 initiative.

They talked about technology, yes, but they talked an equal amount about love.

“Being yourself and loving your audience is really how to run a company,” said Starbucks Chairman Mike Ullman, who has led five major enterprises on three continents.

“The notion of leadership is being redefined,” said Mary Beth West, senior vice president and chief growth officer at The Hershey Company. “Leaders are used to leading from the front. And I think historically that’s what we’ve seen . . . the leadership model of tomorrow is side by side . . . locking arms with the people beside you and bringing the whole group forward.” 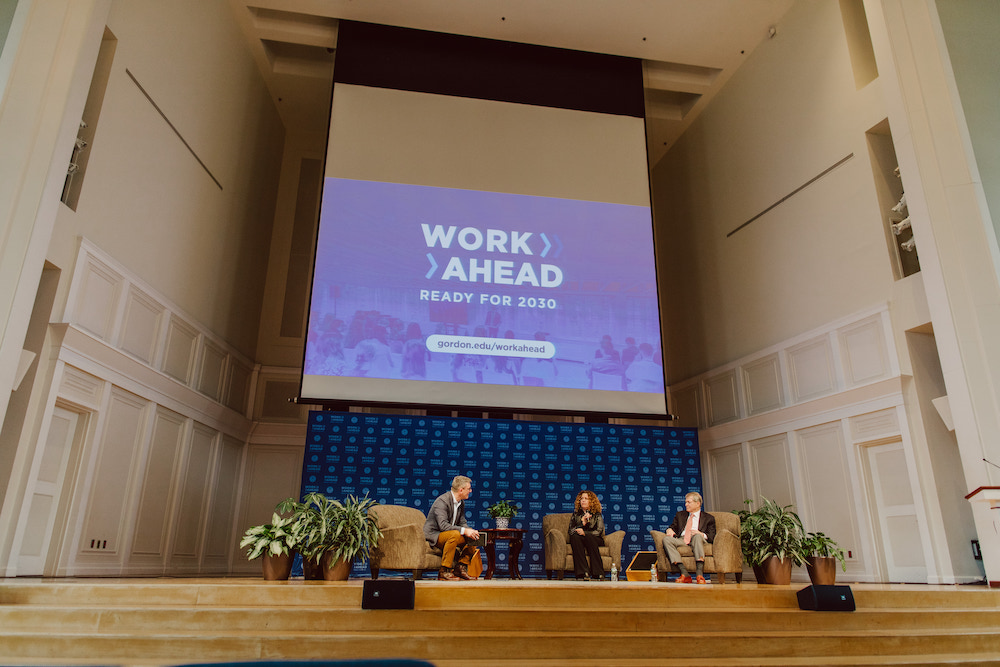 As Ullman and West shared insight on what “forward” might entail, they brought wisdom from their own career challenges and achievements.

For Ullman, leading J. C. Penney through its cultural turnaround began by taking a critical look at the way its 1,100 stores were operating under what he called a “cookie cutter” model, with managers mainly focused on bonuses.

Ullman pressed each store manager “to think about how would they think about their business if they owned it. Wouldn’t they have different kinds of people and different kinds of ideas?” This shift in mentality ushered in J. C. Penney’s most successful period in 100 years. “That’s what leadership is about: How you would engage that group to a thing that’s greater than themselves?” 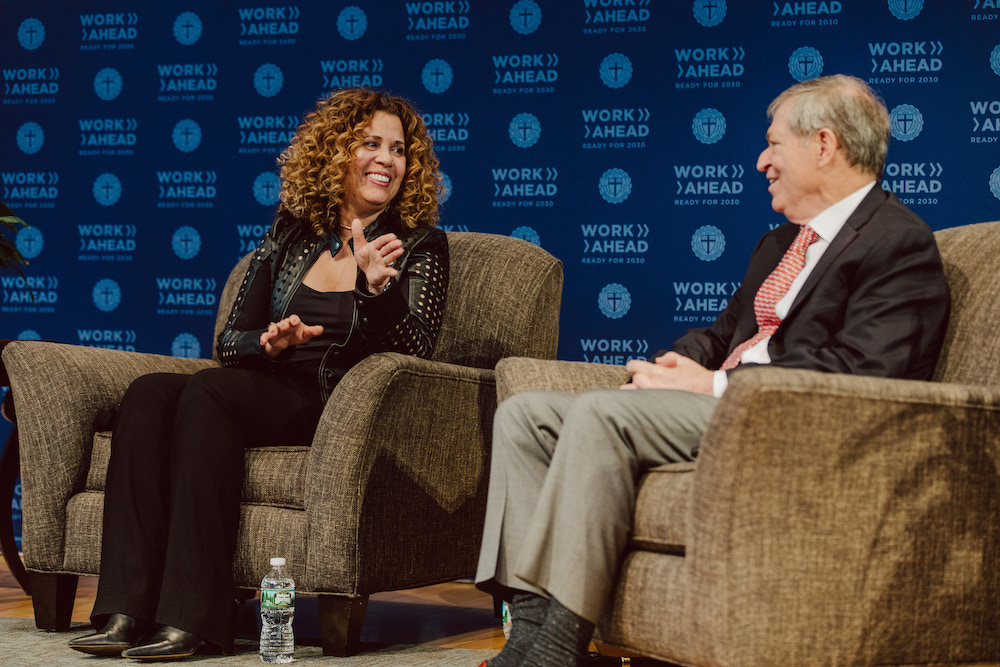 West described a poignant career moment that would either freeze her or propel her forward: when she was told during a performance review that “you’re not white and you’re not male, and it shouldn’t make a difference but it does.”

In that moment, West realized the importance of having the right people in her life and in her workplace. “What does the company stand for and how does the company purpose align with the individual’s purpose?” she asked.

It’s that sense of purpose and importance of people that West says should drive the way we use the inevitable advancements in technology in the future. “The jobs of the future are not jobs that we can see today,” said West. But “the mistake is to focus on the technology rather than focusing on what the technology can enable.”

“I do think [technology] will fundamentally change jobs and the type of jobs. That doesn’t mean jobs go away. It means we free up people to do work, different kinds of work,” she continued.

For West, technology brings freedom and possibilities to the workplace, and a mandate to remain open. She encouraged students in the audience to ask, “How do I think about what I’m doing and what modern technology offers, and how do I match that up into something I want to spend my time doing every day?

“It’s not a question of what somebody else has; it’s what can you do,” said Ullman. 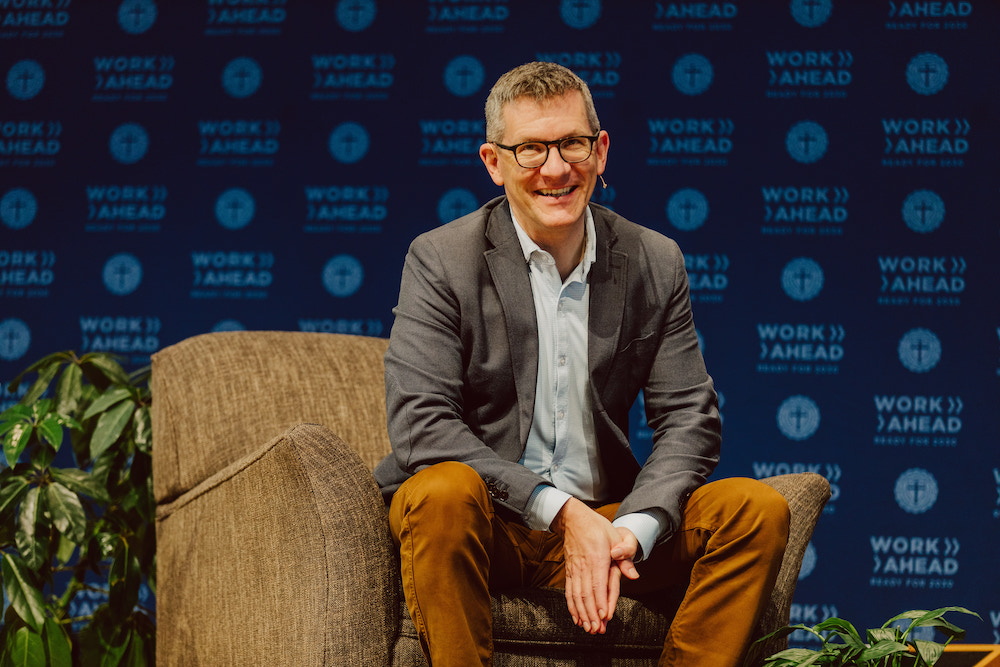 “Certainly technology and the technical things we do at work matter,” concluded Crouch, but “this is actually a people conversation and a purpose conversation.”

Ullman, West and Crouch are three of the more than a dozen relevant thought leaders contributing to Gordon’s Colleges Work Ahead: Ready for 2030 initiative, which will prepare liberal arts students for the future of work.

First-year students will be 30 years old in 2030, and by some estimates, more than two-thirds of them will work in careers and roles that don’t exist today. Work Ahead will offer direction as to what knowledge, skills and aptitudes are needed in order for these students to thrive in future workplaces.

The next Work Ahead event will take place during Homecoming and Family Weekend, which is happening October 4 and 5, 2019.