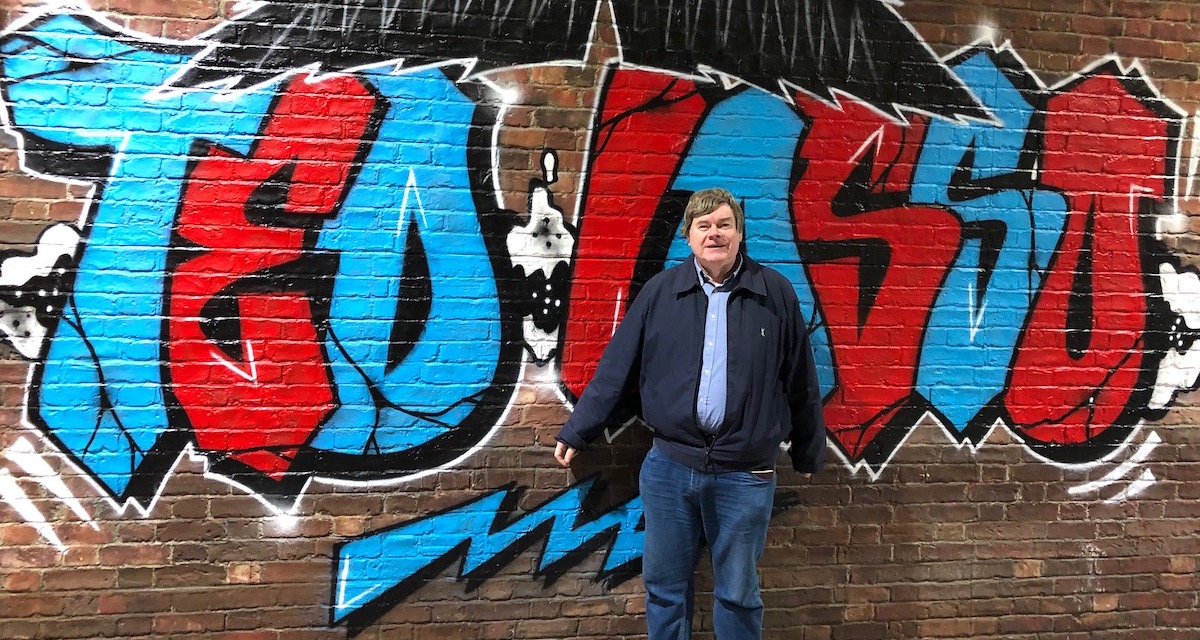 As the highly anticipated announcement of 2021 Primetime Emmy Awards nominations aired this week, TV stars made toasts and tweeted their excitement. When the hit Apple TV+ comedy Ted Lasso broke records with 20 nominations, one of its actors, David Sullivan ’74B, celebrated from afar in the United Kingdom. But instead of feeling personal pride, he was thankful for the opportunity to minister on a major TV set.

“Influence is salt in soup. Impact is a meteor on the moon,” says Sullivan. “I believe that as Christians we need to both impact and influence the world.”

The former pastor and church planter has crafted a unique career as an actor and extra, making his impact and influence as an unofficial missionary in the entertainment industry. Brushing shoulders with household names and film crews on sets like Wonder Woman: 1984 (in which he has a speaking role as “Assistant to the President”), Sullivan seizes the opportunity to share the gospel and silently pray for the salvation of everyone around him, whether it’s the camera person, Angelina Jolie or Wonder Woman herself, Gal Gadot.

“Hollywood can be a pulpit—a very powerful pulpit,” says Sullivan “Cast and crew ask me, ‘What do you do in your other work?’ It opens doors.” He tells them stories from his past that introduce a miraculous God.

Sullivan’s tales of transformational faith date back to his years as a student at Barrington College, interviewing campus guest speakers, prominent pastors and other celebrities for a student-run radio station. Besides scoring backstage access to a Bee Gees concert and visiting the set of Robert Redford’s The Great Gatsby, the experience of interacting with well-known figures like Brother Andrew and Chuck Colson set the foundation for Sullivan’s future of evangelical storytelling.

Between graduating and present day, Sullivan went wherever he felt God’s calling—pastoring in the U.S. or planting churches in the U.K. Sometimes the journey was as simple as looking at a map and praying, then letting God lead him to the right people and places—even North Korea. While a pastor, he continued producing interviews for Christian TV broadcast in closed countries. As a one-man film crew, he spoke with 200 of the best-known Christian figures, and began to feel called to use his platform to minister in the secular world instead of just within the Church.

Sullivan pivoted his interviews to feature guests from a range of religious and nonreligious backgrounds. Often, the topic of spirituality emerged naturally. Sullivan credits that to God’s providence. “A lot of the time I’ll feel led to interview certain people,” says Sullivan. Those political leaders and regional celebrities sometimes yearned for faith, and even became close friends or vital connections who enabled aspects of Sullivan’s ministry.

In 2003 he founded the charity/ministry Harvest Fields Commissioning International and its offshoot, Principles TV. Operating under this business, he officially produced Christian documentary films, television programs and DVDs. He was asked to write his autobiography, Progress of a Modern Pilgrim, by a U.K. Christian publisher.

After over 30 years as a pastor, Sullivan retired and began acting and being an extra. He’s credited for background roles like “Royal Beefeater” and (appropriately) “Priest” in television and film including The Royals and Jason Bourne, music videos for Mimi Webb and Lewis Capaldi, a Heinz-Kraft commercial with Ed Sheeran and a Vodafone Christmas commercial with Martin Freeman.

Now on sets instead of in foreign countries, Sullivan reminds himself there is still important evangelical work to be done. “I used to pray, ‘God, guide my footsteps,’ and these miraculous things would happen,” he recalls. “But when I’d be back here in Britain, there weren’t so many miraculous things. I realized I need to be praying the same thing here.”

No two weeks look the same for Sullivan, who recently wrapped season 2 as a regular on Ted Lasso and is now busy filming an undisclosed BBC series and writing his second autobiography. But one consistent rhythm in Sullivan’s life is praying, listening and stepping out in faith.

Whether a Christian is ministering in a closed country, standing next to a celebrity or simply meeting a passerby on the street, Sullivan says “you’re God’s hands, you’re God’s feet, you’re God’s mouth in that situation. The only Bible that some people will ever read is you. Whatever we do, it’s never too small. Don’t take the limits off of God in your mind.”

← 10 Activities for Your Summer Vacation on the North Shore
10 Things to Pack, 10 Things to Leave Behind: 2021 Edition →
Loading Comments...