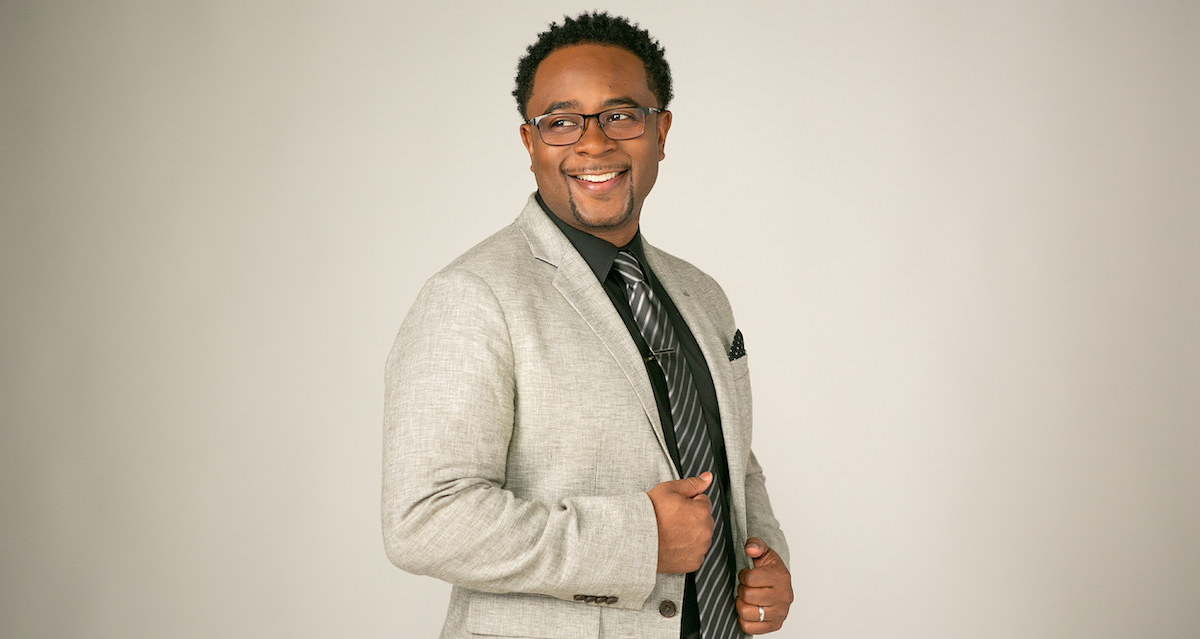 The riveting and true story of the tragedy and its aftermath served as a compelling introduction from a speaker who has made no apologies for a style and message that is candid and forthright and often makes his audiences uncomfortable—carrying with it a desire to shake up the status quo. Virtually visiting again after presenting the Annual Franz Lecture on Thursday, February 25, the author of The Color of Compromise and How to Fight Racism observed that the act of racial terrorism was enabled by a culture complicit toward racism—with silence, apathy and indifference. Thus, Tisby pinned Friday’s address around a statement: “The truth is that the most egregious acts of racism can only occur within a context of compromise.”

Drawing from his writing, Tisby, who also co-hosts Pass the Mic, described the “colors” of compromise: green, white and red. He gave examples of the United States’ history of race and Christianity, inviting his audience on a “journey of truth” to address what he dubbed “the unfortunate fact . . . that when it came to Christians, specifically white Christians, they were often on the wrong side of justice when it came to race.”

Here are some of the points he highlighted in his Convocation address:

The color of compromise is green—“The greed of slave holders and slave traders who put profit profits over people.”

Economic racism. From slavery to Jim Crow, Tisby said economic racism is an essential topic to address. “We can go on and on and on up to the present day about the ways that Black people have not participated in benefiting from the wealth of this nation that they helped to create,” he said, “such that in the present day, Pew Research shows that the median White family has 10 times the wealth of the median Black family.”

The color of compromise is white—“for white supremacy. A story that we tell about race that puts White people at the center of society and on top and all other people at the margins or on the bottom.”

An ideology. Tisby acknowledged that “white supremacy is a tough phrase for some people to hear, but it simply means that in our society, many people presume that White is right or that whatever is common to White people is what is normal or standard or better than that, which comes from Black people and other people of color.” This, he said, is “whiteness”—not a people but “an ideology or a belief or a set of practices.”

Obscuring ethnicity. One problem of whiteness, Tisby said, is that it erases ethnicity. He continued, “At one point in your history, you weren’t White. Your ancestors were German or Italian or Swedish or British . . . When they crossed the Atlantic and came to North America . . . they became White.” This white supremacist society comes with a “currency” that gives White people certain advantages, he said. “But in exchange, you give up that ethnic heritage,” he said. “You give up the language, the dances, the food, culture, the history.”

A narrative of inferiority. In subtle ways, said Tisby, whiteness “creates this opposite and inferior category of blackness. The narrative of racial difference, or white supremacy, says that people of African descent have inherently less dignity, less worth, less ability and less of everything than White people.”

The threat of Christian nationalism. When members of the Ku Klux Klan burned a cross, built an altar and placed upon it a Bible and an American flag on Stone Mountain, GA, Tisby said, “What we see here is this mix of race, religion and a perverted form of patriotism—race because it was just White people up there.” He continued, “We would call it nowadays Christian nationalism, which I believe is the greatest threat to the witness of the gospel in the United States today.”

Manifestations today. Tisby said we must watch for signs of Christian nationalism today, including American flag on pulpits at churches, massive Independence Day celebrations at churches and revering the constitution as an almost religious and divinely inspired document. “This goes beyond patriotism,” he said. “It conflates God and country, God and political conservatism. It mixes up the faith of the church with the fate of the nation.”

The color of compromise red— “The violence involved in the greed and the white supremacy of racism.”

Maintaining control. In his final point, Tisby asserted that another effect of white supremacy is that “in order to maintain control, violence is necessary.” After detailing sickening events of slavery and lynching, Tisby noted that his virtual visit coincided with the anniversary of the 2012 murder of Trayvon Martin. “Even in the 21st century, we are still dealing with the dehumanization and the brutalization of Black people,” he said.

“The fierce urgency of now.” Tisby referred to the theological underpinnings of the phrase “Black lives matter.” He explained that the phrase says, “Black people don’t matter more than anyone else, but that we matter just as much as anyone else, because we too are made in the image of God.” And with this understanding in mind, Tisby rallied listeners, saying, “we must respond to these truths . . . with what Martin Luther King Jr. called ‘the fierce urgency of now.’”

So, can Christian universities do—better yet, lead in—racial justice? In his Franz Lecture the night before, Tisby concluded that, despite the many societal factors he described, Christian universities can lead in racial justice—with changes. He presented the framework of ARC—awareness, relationships and commitment. Tisby recommended building awareness by documenting a history of the institution, including its racial status over the years, and disseminating it; relationships by placing yourself in communities that cause you to be constantly mindful of racial dynamics; and commitment by hiring diverse personnel in clusters—three or more at a time.

But perhaps even more than these essentials, Tisby suggested, Christian colleges need one thing: “Courage.”

← Lenten Devotional: Trust the Voice from Heaven
No One Leaves the Woods Unchanged →