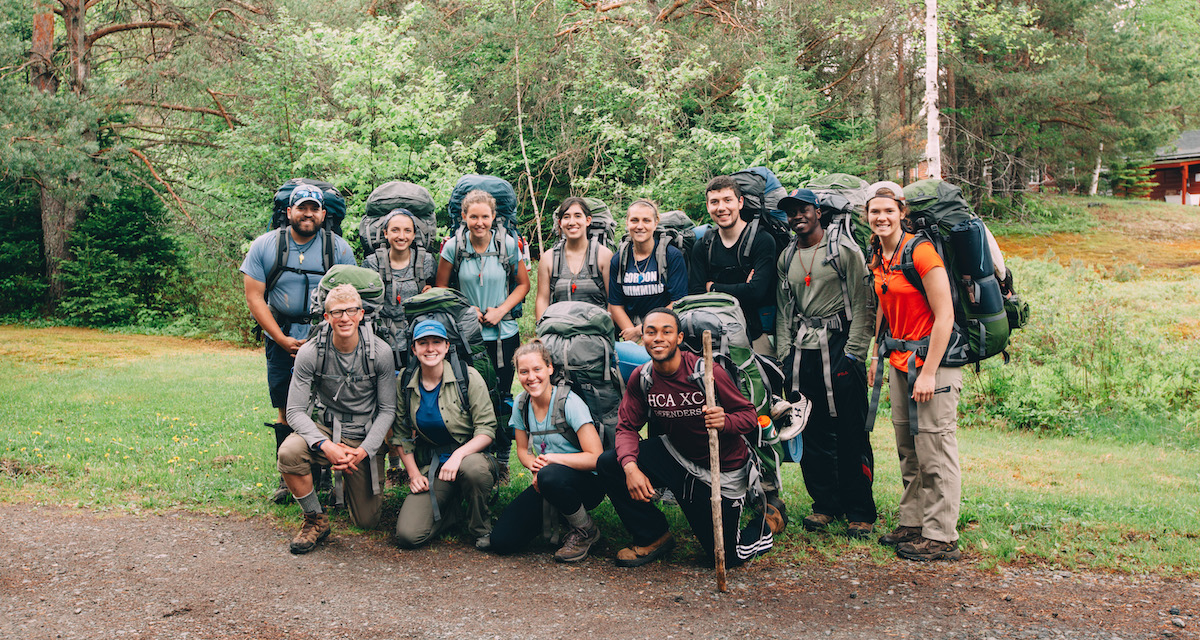 No One Leaves the Woods Unchanged

This article originally appeared in the spring 2021 issue of STILLPOINT, the magazine of Gordon College.

“And I know things now,
Many valuable things,
That I hadn’t known before:
Isn’t it nice to know a lot!
And a little bit not . . .”
—Little Red Riding Hood from Into the Woods

The woods, in classic fairytales, are places of witches, wolves and spiders. They’re where people encounter what they fear most. What begins as a physical journey soon becomes a psychological—some might say spiritual—one in which a character must choose courage over cowardice. Collectively, in over 1,000 pages of independent research, these scholars have proven what we have known for years intuitively: that no one—not Little Red Riding Hood, not Frodo Baggins, not even a first-year college student—leaves the woods unchanged. From 1996 until present day, a group of independent researchers have put outdoor orientation programs (OOPs), aimed at helping first-year students transition to college, to the test. En masse, they interviewed 36 trip leaders and 1,581 participants (many representing La Vida and Discovery) to see not only if they had changed but to determine how.

Stonehouse is a suburbanite whose love of nature can be traced back to family vacations at lakeside cottages, years of cross country running, summers planting trees in remote areas of British Columbia (to pay for college) and his honeymoon—in which he hiked the entire Appalachian Trail with his wife, Amanda. Since Stonehouse investigated the relationship between character growth and outdoor adventure education as part of his doctoral dissertation, he’s joined the ranks of the “Adirondack 46-ers,” having summited all 46 high peaks.

Before Starbuck became a scholar and a healthcare professional, he was first a dirt-bike instructor who led tourists through the rough terrain of the Sahara Desert and Atlas Mountains of Morocco, director of Gordon’s Wilderness Immersion and Leadership Development (W.I.L.D.) semester and a college professor who taught more than 20 outdoor education courses. He led his first outdoor orientation trip as a graduate student. That’s when he realized that being a good leader was less about charm and heroism and more about “sharing power, responsibility and ownership of a task with others.”

In the 80s, Anderson-Hanley met her husband on a Gordon ropes course. As a La Vida sherpa and participant, she recalls adventures like spending a night in a canoe, “sleeping in a communal flotilla, floating under the universe of stars.” These outdoor experiences at Gordon laid the foundation for her academic career. Her investigations into the benefits of La Vida and Discovery began with her dissertation. Currently, she is working to publish a study she co-authored with the late Rich Obenschain and others, which examines the advantages of disconnecting from electronics and social media during La Vida expeditions. (Spoiler alert: participants experienced increased resilience and spiritual well-being.)

Viti is a college professor who takes experiential learning to a whole new level. To give her students hands-on experience in wilderness medicine, she partners with local fire, rescue and police departments to simulate many of the real rescue scenarios her students may encounter after graduation. For over 20 years, she has taught Wilderness First and First Responder certification classes and has even provided medical care to mountaineers in the Ecuadorian Andes. To the study of outdoor orientation programs, she brings 21 years of experience leading wilderness expeditions across the U.S. and creating outdoor educational experiences for K–12 students.

Rude worked as a forester for Weyerhaeuser for 11 years before he started his career in student development. At Weyerhaeuser, he ensured that the lumber company never cut down more trees than they planted, and Rude organized for millions of seedlings to be sowed every year. He also led the Junior Forest Ranger Program based in Edmonton, Alberta, where he helped train high school students in wildfire management, wildlife research, trail building, stream assessments and forest conservation.

Trip leaders and participants are changed by outdoor orientation programs, like La Vida and Discovery, in similar ways. But trip leaders spend more time in the woods and carry more responsibility and, thus, learn unique lessons—so we’ll start with those first.

The guides responsible for leading 12-day Adirondack expeditions with La Vida throughout the summer are called “sherpas,” which is synonymous with “mountain guide.” The word is actually the name of an ethnic group in Nepal that lives near the Himalayas and has gained an international reputation for their mastery of Earth’s highest peaks. At La Vida, “sherpas” are responsible for the safety and spiritual growth of the college students in their care. As such, they receive wilderness medical training and are often the primary health responder in emergency situations that arise while trekking in the backcountry.

As a Ph.D. student in the field of outdoor education, Dr. David Starbuck wondered how first-time trip leaders in OOPs perceived the value and impact of their leadership role. His investigation is nearly 200 pages long and was the first academic study to focus solely on trip leaders (and not participants). Here’s what he found:

Knowing when to speak and when to listen

After working as a trip leader for an OOP, students reported to Starbuck that in being responsible for initiating and guiding important conversations, they learned how to exercise their voices appropriately. Quiet leaders who naturally refrained from sharing their own ideas felt compelled to speak up. Even months later when they were well into their fall semester, they noticed that they were more likely to raise their hand in class, ask their professor for help and express their personal opinions in class, even when that meant disagreeing with someone. Vocal leaders who don’t hesitate to give advice or voice their own opinions learned to exercise restraint and, instead, learned the importance of listening to others.

In a wilderness context, confrontation is inescapable. There are no doors to shut. And it’s impossible to ignore the people you depend on for food, safety, companionship and your sense of direction. Because of this, trip leaders learned to address conflict immediately. To foster a healthy relationship with their co-leaders, they had to own up to their mistakes and learn to appreciate different leadership styles (and not categorize them as personal faults). It was also important for trip leaders to make their participants feel safe—and that meant being emotionally dependable. Trip leaders couldn’t surrender to bad moods or self-pity. They had to learn appropriate boundaries for self-disclosure.

In the beginning, first-time trip leaders didn’t have a lot of confidence in their own ability to lead others under pressure and in challenging situations. There was wildlife and unpredictable weather to worry about—and it was hard not to think about the many potential medical problems that could arise, since they’d just learned about them as part of their wilderness medical training. But by the end of their first trip, they all believed themselves to be highly capable leaders. Despite their greatest fears, they kept their participants safe and healthy—and they did so with gusto.

These findings originate from eight individual studies conducted by Anderson-Hanley, Rude, Viti and Stonehouse. To ensure that these self-reported changes were not of an ephemeral nature, they surveyed participants more than once and months after their OOP experience. Over the decades and from generation to generation, the outcomes are the same: Participants return to college with a greater sense of confidence, self- worth and belonging, which ripples out to touch every area of their lives.

After finishing their OOP, participants expressed greater confidence in their ability to succeed in the face of adversity, now and in the future. In being able to recall moments of overcoming physical hardship, participants felt inspired to persevere in new situations; they remembered there was much to gain from their hard work.

Memories of overcoming physical challenges—like summiting a mountain or bushwhacking through the backcountry— served as important reference points when college students returned to campus and were confronted with academic challenges. Many participants reported that they were less occupied with their grades and more focused on enjoying
the learning process. After their journey through the woods, they knew there was more to learning than reaching a particular destination.

OOPs provided an entry point into campus life and a strong sense of communal belonging. By the time participants started their first semester or finished up their first year of college, they were more comfortable with themselves and the people around them. This familiarity often inspired them to try new things and get more involved.

In one of her studies, Viti found that first-year college students who participate in an OOP experience less test anxiety than those who do not. This is because OOP students get a lot of practice with problem-solving in an unfamiliar environment. They are repeatedly exposed to situations that have some inherent risk, and they learn to approach them calmly.

OOPs are designed in such a way that participants cannot get by on their
own self-sufficiency. They must rely on others to make it out of the woods. This interdependence helps participants to realize their need for diverse others. A single person cannot hang a 200-pound bear bag in a tree on their own. They also establish meaningful connections with diverse individuals, listening to each other’s life stories and personal reflections. As a result, they are more accepting of a person’s differences and more likely to see the value of them.

A positive relationship with failure

Prior to their OOP, many participants conceded that their fear of failure often outweighed their desire to try something new. If there was no guarantee they could do something well, they didn’t want to try it. But OOPs are designed to challenge participants in ways they cannot prepare for—no matter their level of physical fitness, spiritual humility or mental toughness. In giving participants the freedom to fail in these areas, participants develop a healthy relationship with failure and start to see it as a normal part of life that they can learn from.

In his interviews with OOP participants, Stonehouse noted that there was a correlation between self-confidence and commitment to moral values. Participants explained that their newfound confidence made it possible to resist peer pressure and withstand the criticism and ridicule of others. By the end of their expedition, participants reported that they were less concerned about what people thought about them and more apt to stand up for their beliefs, even when those beliefs were unpopular.

Read the full “Transformation on the Trail” issue of STILLPOINT magazine online.