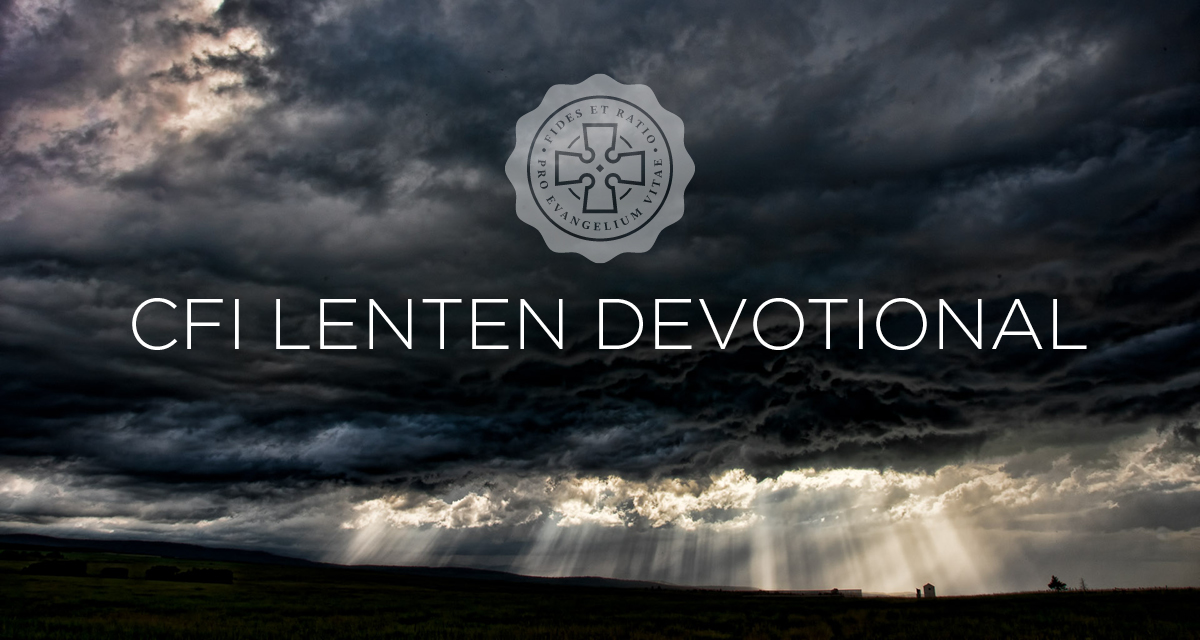 During Lent, the Center for Faith and Inquiry (CFI) shares weekly meditations penned by members of the Gordon community. Join CFI this Lenten season in prayer, in contemplation and in anticipation. Sign up to receive these devotions in your inbox weekly >

While Jesus was with his disciples, they didn’t fast. The reason Jesus gave critics was that he, the bridegroom, was with them. And you don’t fast at a wedding!

Yet, lest anyone thinks Jesus didn’t care about fasting or didn’t have the strength, he once fasted for 40 days and nights! In doing so, he conquered his appetite and also symbolically re-enacted Israel’s 40 years in the wilderness, showing that he is the new Israel, and that the people who gather around him are the new people of God.

This theme of Jesus being the perfect Son of God again appears in the way he responded to temptations in the wilderness. Satan tempted Jesus three times, each time urging him to exercise divine power. Each time, Jesus resisted. He refused to act according to Satan’s will rather than the perfect purposes and timing of his Father in Heaven.

And the story goes on to reveal that Jesus had far greater power than Satan offered in the wilderness!

Turn this stone into bread, the Devil said. Jesus responded: “Man shall not live on bread alone . . .” Later, Jesus did more than turn a stone into a loaf of bread; he transformed five loaves and two fish into enough to feed thousands (Mt. 14:13–21).

Satan then said, Show me you can fly. Again, Jesus didn’t bite. No thanks, He said. “Do not put the Lord your God to the test.”  I’m not dancing with you, Devil. Later, echoing this scene, the crowd taunted Jesus on the cross: “If you are the Son of God, come down from the cross.” Jesus replied that he could command angels to take him down, but he chose not to. In case we think he wouldn’t have been able to soar either time, Jesus later defied death by rising from the dead and then ascending into the sky (Mt. 28:1–10; Luke 24:51).

Finally, Satan took Jesus (still an obscure carpenter at this point, without any followers) to a mountain, showed him all the kingdoms, and said, “This I will give you . . .” Jesus told him to get lost. Later, at the end of his earthly ministry, Jesus was able to say: “All authority on heaven and Earth has been given to me” (Mt: 28:18). After resisting the wilderness temptation, Jesus received from his Father all the authority Satan had offered—and far more!

In Matthew 4, Jesus chose to fast and to answer the Devil with wise use of Scripture. As a result, Satan left him, and angels came to attend him, and he went on to fulfill his divine calling. Jesus knew the joy of being God’s beloved Son. And, because of his finished work on the cross, we, too, can resist the persistent temptations we all face, including the temptation of unbelief. If you are following Jesus, know the joy of being loved by your Father—of being God’s beloved child.

← What Does Art Have to Do with the Cross?
The Meaning Behind the Month →