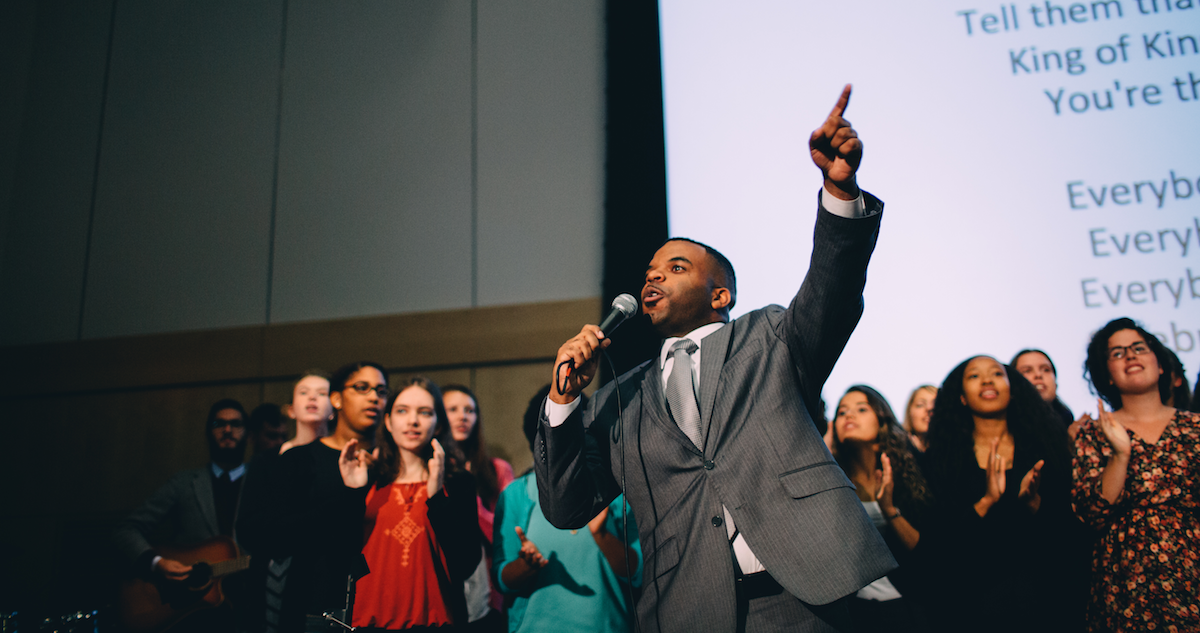 During Founder’s Weekend, the Gordon College Gospel Experience will celebrate its 5th anniversary, performing a concert themed “One Name.” Under the leadership of conductor Craig Ramsey ’13, the choir has been more than a success story as it has steadily gained momentum over the past five years—it’s a beautiful example of unity at Gordon.

When Ramsey was a student, he joined an alternate Chapel band that sang gospel music. “This was my beginning,” he says. Ramsey saw the need for a creative and edifying outlet, since the previous gospel choir had experienced a long hiatus. So in 2012, during his junior year, he established God’s Chosen Gospel Choir.

“I wasn’t necessarily looking to start a choir,” he says. “I just wanted there to be an organization established where students could come together and be challenged to give God every area of their life. This was the mission in my personal life, so I wanted others to strive for this likewise.”

Ramsey explains that his goal for the students has been two-fold. First is for them to understand that what they do in life is not about them—“the ideology that A. J. Gordon founded this institution on,” he says. “I believe that students are able to accomplish more when we make it about Jesus Christ.”

Second, he wants them to learn how to honor their leaders. “I want them to take these beliefs back to their churches, ministries and future employment,” he says. “Music has always been secondary. I want to prepare hearts more than I prepare music.”

Ramsey, who lives in Lynn and works as a financial advisor at New York Life Insurance Company in Boston, comes to rehearsal straight from work and is rarely seen without a suit and tie. Over the past five years, he has evolved from a student leader to “more of a developer,” he explains. “I have come to understand that students like to be led by their peers, so my role is to assist our present leadership while developing future leadership all at the same time.”

Benjamin Suprice ’18 says the choir “has definitely played a huge part in my personal growth and faith at Gordon College. I came into the choir as the jokester and dancer who would generally come to rehearsal fashionably late; however, as time went on, I began to recognize the importance of the choir and the people in it. We were all students—facing a range of problems, from different experiences and cultures—coming together to see God move. As a section leader for the men, we have laughed together, cried together, prayed together and have pushed each other in our faiths.”

Hannah Bourk ’19 echoes, “[The choir] fills you up when you’re feeling like everything else is draining you of your energy and motivation… I can forget about why I’m so stressed and just sing praises to Christ in a room full of people from various areas of study, denominations and cultural and racial backgrounds that I might never normally have the chance to interact with on a daily basis.”

“Craig speaks truth into our lives,” Bourk continues. “Even though sometimes it may be hard to hear, that keeps us thinking in a Kingdom perspective rather than an inward perspective. As much as we grow under Craig’s leadership, I think Craig grows through leading us, and it shows how necessary fellowship with one another is to the advancement of the Kingdom of God.”

Just as God’s Chosen is more than a choir, their 5th anniversary Gospel Experience celebration will be more than a concert. “It brings a whole different group to this campus that creates another beautiful display that Gordon has to offer,” Ramsey says. “The only word that can describe this year will be historic.”

Founder’s Weekend is particularly special to the choir because of what it stands for. “This is a great opportunity to reflect on all those who have come before us, honor those with us now and continue to prepare for those who will be with us in the future,” Ramsey says.